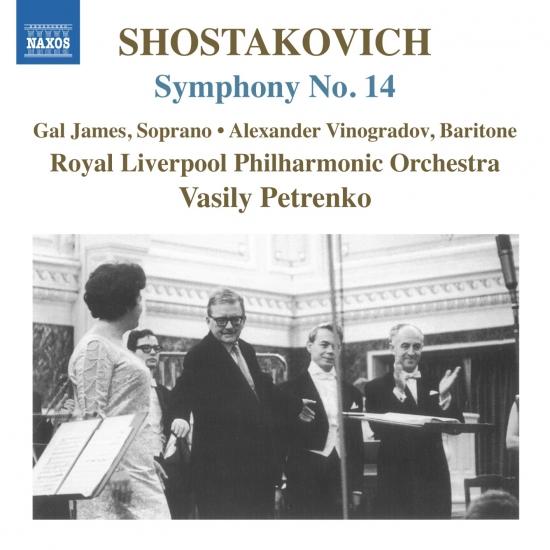 At its première in June 1969 Shostakovich described his Symphony No. 14, in effect a symphonic song cycle, as ‘a fight for the liberation of humanity... a great protest against death, a reminder to live one’s life honestly, decently, nobly...’ Originally intending to write an oratorio, Shostakovich set eleven poems on the theme of mortality, and in particular early or unjust death, for two solo singers accompanied by strings and percussion. This is the penultimate release in Vasily Petrenko’s internationally acclaimed symphonic cycle.
The Fourteenth Symphony is a powerful, death-obsessed work, unremittingly gripping, and the penultimate work in the canon of 15 symphonies. Petrenko’s cycle has thus far received huge international acclaim, winning accolades from The Sunday Times, Gramophone, IRR, Fanfare, BBC Music Magazine etc. There are many famous recordings of the work, ranging from those early ones conducted by Kondrashin, Barshai, Ormandy, and Bernstein. A more recent classic is the 1981 Haitink, but that is still over 30 years old. Barshai more recently re-recorded it (on a Brilliant in a budget price set of the symphonies) and at full-price there are recordings by Wigglesworth and Jansons and others.
The award-winning Royal Liverpool Philharmonic Orchestra is the UK’s oldest continuing professional symphony orchestra, dating from 1840. The dynamic young Russian, Vasily Petrenko was appointed Principal Conductor of the orchestra in September 2006 and in September 2009 became Chief Conductor.
Vinogradov is the genuine bass article but his pitches can be approximate...Orchestral double basses, though, have terrific impact.” (BBC Music Magazine)
“Petrenko gets appropriately dark and brooding textures from his strings and percussion ensemble, unleashing sounds of raw ferocity...[Vinogradov] has a magnificent dark bass and trenchant delivery of the text, an ideal voice for this music. At Naxos’s bargain price, this is unmissable.” (Sunday Times)
“this performance demonstrates Petrenko's and the Liverpool orchestra's fine grasp of the composer's evolving idiom, with the result that this is a deeply impressive issue all round... Gal James's timbre might be considered a shade (no more than that) light...but her intonation and diction are fine and her phrasing is excellent...Vinogradov is also most impressive.” (International Record Review)
Gal James, soprano
Alexander Vinogradov, baritone
Royal Liverpool Philharmonic Orchestra
Vasily Petrenko, conductor