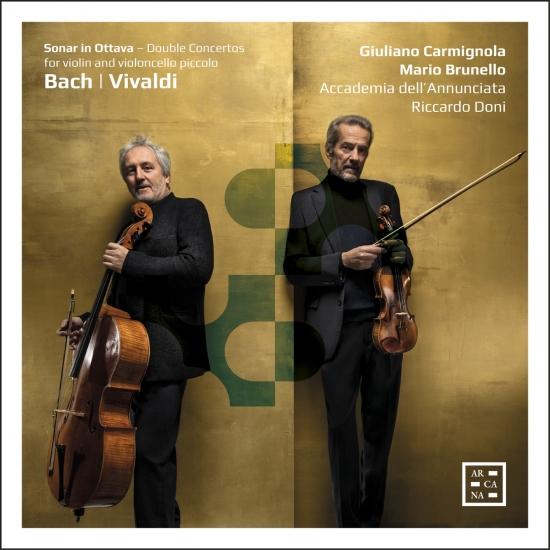 Violinist Giuliano Carmignola and cellist Mario Brunello: one of the greatest interpreters of Vivaldi and Bach, whose recent recording of the Sonatas and Partitas was described by the authoritative magazine Gramophone as ‘a definite first choice among period instrument recordings of these works’; and his long-time friend Mario Brunello, acclaimed for his personal reinterpretation of that same famous collection on the violoncello piccolo (A469).
Accompanied by the Milanese ensemble Accademia dell’Annunciata, they offer a highly original, experimental programme. Inspired by the three existing double concertos for violin and cello by Vivaldi – an unusual coupling in eighteenth century concerto literature – they revisit double concertos by Vivaldi and Bach (the famous BWV 1043 for two violins and BWV 1060 for violin and oboe), transposing the second solo part an octave lower on the violoncello piccolo. Underpinned by persuasive historical and musicological evidence, the approach first and foremost reveals their pleasure in working together on an innovative project. The outcome is a delightful opportunity to enjoy famous pieces in a totally different light.
Giuliano Carmignola, violin
Mario Brunello, cello
Accademia dell'Annunciata
Riccardo Doni, direction 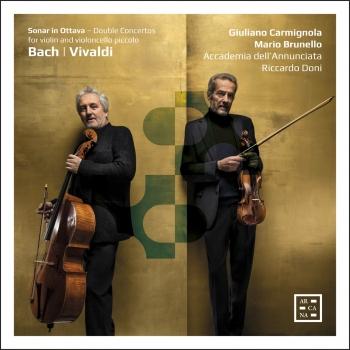 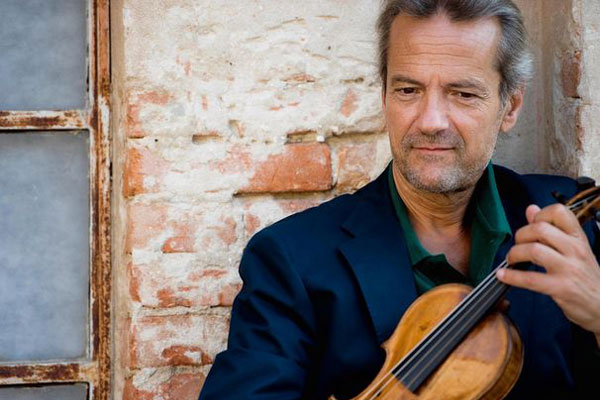 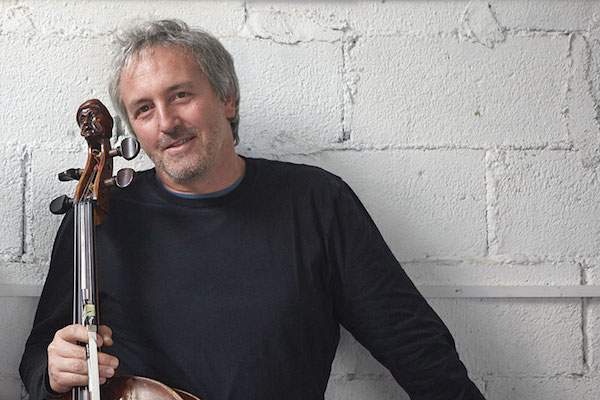 Giuliano Carmignola
began his career as a soloist under the baton of conductors such as Claudio Abbado, Eliahu Inbal, Peter Maag and Giuseppe Sinopoli and has performed in all the most prestigious concert halls of the world.
He collaborated with conductors such as Umberto Benedetti Michelangeli, Daniele Gatti, Andrea Marcon, Christoph Hogwood, Trevor Pinnok, Franz Brüggen, Ivor Bolton, Richard Egarr, Giovanni Antonini, Ottavio Dantone.
Significant was his collaboration with the Virtuosi of Rome during the ‘70s and then orchestras such as Orchestra da camera di Mantova, Sonatori della gioiosa Marca, Venice Baroque Orchestra, Orchestra Mozart, Orchestre des Champs Elysées, Kammerorchester Basel, Il Giardino Armonico, Zürich Chamber Orchestra, Academy of Ancient Music, Orchestre de Chambre de Paris, Concerto Köln, Accademia Bizantina.
In the recent years he has started receiving invitations as a guest conductor by orchestras such as Academy of Ancient Music, Helsingborg Symphony Orchestra, Orchestre de Chambre de Paris and most recently by KlangVerwaltung Orchestra to conduct Mozart “Jupiter” Symphony n Herrenchiemse, Germany. He received a huge success.
His recording has led him to collaborate with labels such as Erato, Divox Antiqua, Sony and Deutsche Grammophon GmbH, with which he currently has an exclusive contract. His recording releases have won many international awards.
Among his recent recordings the complete Mozart concertos with Claudio Abbado and Orchestra Mozart (DG 2008), Haydn violin concertos with the Orchestre des Champs Elysées (DG 2012), “Vivaldi con moto” with Accademia Bizantina, conducted by Ottavio Dantone (DG 2013), “Bach Violin Concertos” with Concerto Köln (DG 2015), “Vivaldi Concerti per due violini” with Amandine Beyer and Ensemble Gli Incogniti (HM 2016). The two last Cds have both been rewarded by the Diapason d’Or.
He has recently recorded a CD “Giardini, J. Ch. Bach – Concerti per violino e orchestra” (label Amadeus 2016) with the young ensemble Accademia dell' Annunciata (dir. Riccardo Doni) which has been awarded of the “Premio” from Magazine Amadeus (Sept 2017). His last recording “J. S. Bach: Sonatas & Partitas BWV 1001-1006” (Deutsche Grammophon) was released in October 2018.
He has taught courses at Siena’s Accademia Musicale Chigiana and at the Lucerne’s Hochschule. He was awarded the title of "Academician of the Royal Philharmonic Academy of Bologna" and "Academician of Santa Cecilia."
Mario Brunello
is a captivating musician who plays with an expressive freedom rarely found today. The Italian cellist – equally at home as soloist, chamber musician, and project innovator – has been praised by Gramophone for his “great spirit” and described as “intense and passionate” by The Strad.
Brunello made his breakthrough in 1986 as the first and only Italian to win the coveted International Tchaikovsky Competition in Moscow. Since then, Brunello’s heartfelt playing has earned him appearances with such leading conductors as Antonio Pappano, Valery Gergiev, Riccardo Chailly, Ton Koopman, Riccardo Muti, Myung-Whun Chung and Seiji Ozawa, and concerto performances with many of the world’s foremost ensembles, including the London Symphony, the Philadelphia Orchestra, the NHK Symphony Tokyo, the Kioi Sinfonietta, the Filarmonica della Scala and the Accademia Nazionale di Santa Cecilia. As a chamber musician, Brunello has forged fruitful partnerships with Gidon Kremer, Yuri Bashmet, Martha Argerich, Andrea Lucchesini, Frank Peter Zimmermann, Isabelle Faust, Maurizio Pollini and the Borodin Quartet. As the founder and artistic director of Arte Sella and I Suoni delle Dolomiti festivals, Brunello has also brought music of the highest calibre to the Dolomite peaks.
Among Brunello’s engagements for the season 2019-20 are concerts in Warsaw with the Warsaw Philharmonic Orchestra, in Moscow with the Tchaikovsky Symphony Orchestra and in Yerevan as a guest of the ontemporary Classics Festival. His ongoing collaboration with Kremerata Baltica continues with appearances at the Kronberg Academy Festival – together with Gidon Kremer – and with a tour of South America in the double role of oloist and conductor. Brunello also continues to serve as artist-in-residence of the Philharmonie Zuidnederland.
Brunello plays a precious Maggini cello crafted in the early 1600s. He has, however, grown increasingly fond in recent years of a second instrument: the “cello piccolo”. The cello piccolo – as its name implies, a smaller version of the cello – shares the tuning of a violin, as well as something of the latter’s nimble handling, while retaining much of the resonance and depth of the former. Brunello has exploited the full potential of this instrument in revelatory performances of the baroque violin repertoire, focusing on the masterpieces of Bach, Vivaldi and Tartini.
This season coincides with the 250th anniversary of Giuseppe Tartini, which Brunello will celebrate with an extended homage to the composer, whose works he will perform and record alone as well as in collaboration with the Accademia dell’Annunciata and the violinist Giuliano Carmigniola. His soon-to-be-released recording of the Bach’s Sonatas and Partitas for solo violin, performed on the cello piccolo, represents both the fulfilment of Brunello’s artistic dream and an extraordinary opportunity for the listening public to experience these familiar works in a manner both deeply expressive and refreshingly novel.
Brunello’s richly diverse discography includes recordings of the works of Bach, Beethoven, Brahms, Schubert, Vivaldi, Haydn, Chopin, Janaček, and Sollima. His five-CD set on the EGEA label, the “Brunello Series”, features his performances of Tavener’s “The Protecting Veil” with the Kremerata Baltica and his award-winning traversal of Bach’s Cello Suites. Also worthy of note are his Deustche Grammophon release of Beethoven’s Triple Concerto under the baton of Claudio Abbado; his Dvořák’s Cello Concerto, conducted by Antonia Pappano (EMI); and his stunning live performance video of Shostakovich’s Cello Concerto No. 2, conducted by Valery Gergiev in the Salle Pleyel in Paris.