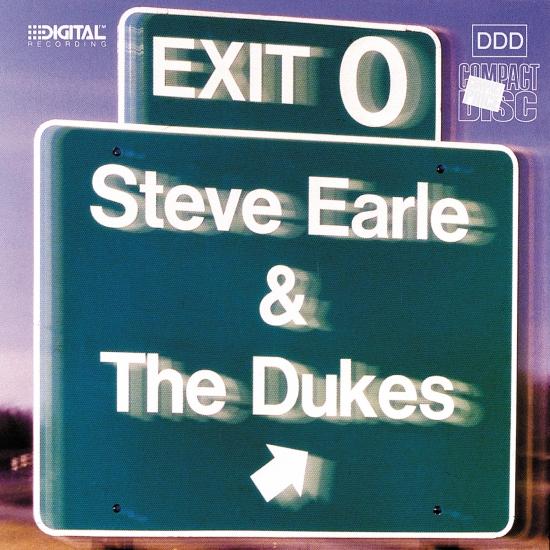 This is the 1987 follow-up to Steve Earle & The Dukes' debut, „Guitar Town“. Like its predecessor, „Exit 0“ mixes toughness with tang, grit with passion, and social consciousness with rowdy fun. The Dukes were the perfect compliment to Earle's songs, as they were able to roar as well as weep. 'The Rain Came Down' is a mid-tempo ballad that's suffused with the gorgeous wash of Ken Moore's organ playing on the choruses. The ensemble can also convincingly tackle a roadhouse rocker like 'The Week of Living Dangerously' with guts and aplomb. The 'woo-woo' vocals are a surprise out of the blue, and their contrast to the relentless of the surrounding playing can induce chills. Throughout, the sound is vivid and crystalline. Earle's vocals buzz through and around it all like crazy and elegant embroidery on an old blanket.
„Steve Earle once told a reporter that after listening to the final mix of 1987's Exit 0, he and his band hopped on their tour bus and played yet another gig that night, which is what they'd been doing during most of their time off from recording sessions. Exit 0 was recorded with Earle's road band, the Dukes, instead of the usual team of Nashville session pros, and as a consequence it boasts a leaner, tougher sound than his debut, Guitar Town, though the slightly slick cookie-cutter production by Tony Brown, Emory Gordy, Jr., and Richard Bennett saps a bit of the music's power. The album features a few great songs, including 'I Ain't Never Satisfied' (which could practically be Earle's theme song), 'The Week of Living Dangerously,' 'The Rain Came Down,' and 'Sweet Little '66,' but there's a faint hint of sophomore slump to Exit 0 -- 'No. 29' is far too sentimental for its own good, the Doug Sahm homage 'San Antonio Girl' isn't nearly as good as the songs that clearly inspired it, and 'Angry Young Man' feels like filler, something in short supply on most Steve Earle albums. Exit 0 is just uneven enough to qualify as a genuine disappointment, though that's within the context of Earle's body of work; this is still livelier stuff than nearly anyone in Nashville was cranking out at the time (short of Dwight Yoakam) and the high points confirm the guy who wrote 'Guitar Town' had more fine tunes where that came from.“ (Mark Deming, AMG)
Bucky Baxter, steel guitar, vocals
Steve Earle, lead vocals, acoustic guitar, electric guitar, harmonica
Reno Kling, bass
Mike McAdam, six and twelve string electric guitars, vocals
Ken Moore, organ, synthesizer, vocals
Harry Stinson, drums, vocals
Additional musicians:
John Jarvis, piano
Emory Gordy, Jr., mandolin
Richard Bennett, acoustic guitar, electric guitar, six string bass
K-Meaux Boudin, accordion
Recorded 1987 at Emerald Studios, Nashville, Tennessee
Engineered by Chuck Ainlay
Produced by Tony Brown, Emory Gordy, Jr., Richard Bennett
Digitally remastered