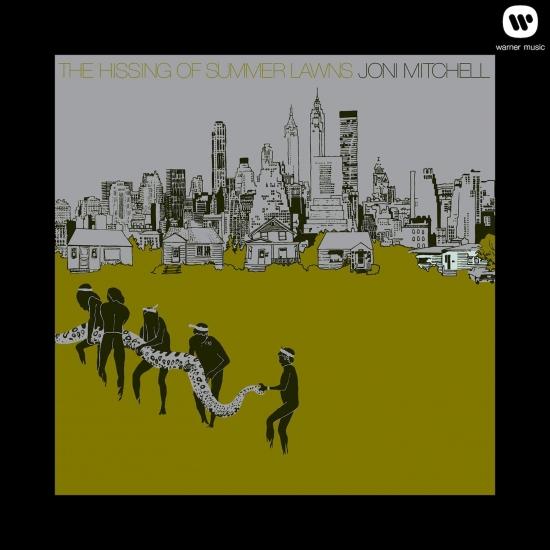 Info for The Hissing Of Summer Lawns (Remastered)

'Court and Spark had earned Joni Mitchell mainstream pop acceptance but its underlying spirit of discovery pushed her to risk new-found success with this edgier, experimental sequel released in 1975. Although the session crew is largely the same, and sleek jazz elements again abound, these songs find her introducing Burundi drums (on 'The Jungle Line'), layering magisterial but forbidding vocal harmonies ('Shadows and Light') and casting rueful shadows across the sun-dazed Southern California of the title song. Her daring promptly earned critical scorn and halted her commercial expansion, but the album's confident eclecticism and dark beauty have outlived that reception; from the safety of hindsight, Hissing was a promise to stay hungry and creatively adventurous, a promise kept then and now.' (Sam Sutherland)
'This record is a total work conceived graphically, musically, lyrically and accidentally - as a whole. The performances were guided by the given compositional structures and the audibly inspired beauty of every player. The whole unfolded like a mystery. It is not my intention to unravel that mystery for anyone, but rather to offer some additional clues: 'Centerpiece' is a Johnny Mandel-Jon Hendricks tune. John Guerin and I collaborated on 'The Hissing Of Summer Lawns.' 'The Boho Dance' is a Tom Wolfe-ism from the book, 'The Painted Word.' The poem, 'Don't Interrupt The Sorrow' was born around 4 a.m. in a New York loft. Larry Poons seeded it and Bobby Neuwirth was midwife here, but the child filtered thru Genesis at Jackson Lake, Saskatchewan, is rebellious and mystical and insists that its conception was immaculate. (Joni Mitchell)
Joni Mitchell, guitar, piano, synthesizer, vocals
Joe Sample, electric piano, keyboards
Victor Feldman, electric piano, vibes, conga
Larry Carlton, electric guitar
Robben Ford, electric guitar
Jeff Baxter, electric guitar
James Taylor, electric guitar, vocals
David Crosby, vocals
Graham Nash, vocals
Bud Shank, saxophone, flute
Chuck Findley, trumpet, flugelhorn
Max Bennett, bass
Wilton Felder, bass
John Guerin, drums, keyboards
The Warrior Drums Of Burundi
Dave Oehler (string arrangements)
Digitally remastered