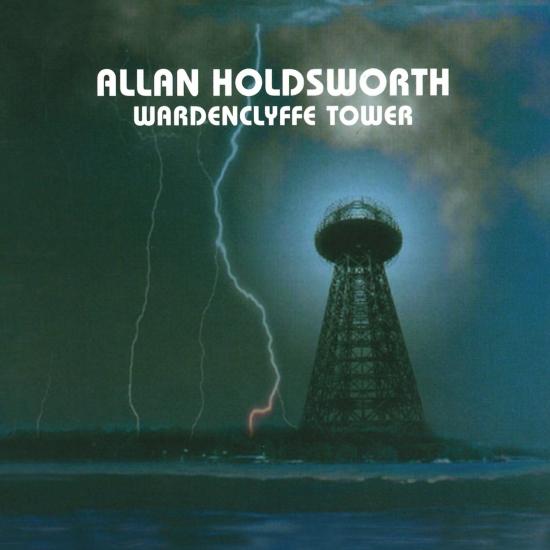 "Wardenclyffe Tower" opened a stunning new chapter in guitarist Allan Holdsworth's solo career that blossomed during the '80s. As a producer and composer, he explored an expanding galaxy of guitar-controlled synths blended with his famed legato-lead stylings and an ever evolving array of chordal colorings. "Wardenclyffe Tower" is stocked with further electric guitar innovations, including two tracks featuring Holdsworth's family of mutant, baritone guitars, which he affectionately describes as "exceedingly large and long, with manly tones." "Wardenclyffe Tower", like "Secrets", features contributions from world-class musical collaborators, including long-time bandmates like drummer Chad Wackerman (Frank Zappa, Andy Summers, Men At Work) bassist Jimmy Johnson (Flimm and the BBs, Dory Cayimi, etc.) drummer/keyboardist Gary Husband (Level 42), and keyboardist Steve Hunt (Stanley Clarke). Drummer Vinnie Colaiuta (Sting, Tom Scott, etc.) also contributes a whirlwind solo performance on the album's one vocal track, featuring vocalist Naomi Star. The sum of Holdsworth's production realizes an enchanting rhythmic and harmonic chemistry - or alchemy - potent with unexpected melodic twists and turns. The spontaneous, fiery dialogue of group live performance is framed in Holdsworth's meticulous, state-of-the-art production techniques.
This 1992 release features Holdsworth in conversation with usual compatriots Jimmy Johnson, Chad Wackerman, and Gary Husband. Keyboards are provided not only by Steve Hunt, but also by both Wackerman and Husband. Husband in particular demonstrates that his facility on the keyboards is equal to his skill on the drums. Despite the all-star cast of characters, there are certain peculiarities to Wardenclyffe Tower that prevent it from being numbered among Holdsworth's best work. One very obvious oddity is the strange and ill-advised ending to the opener, "5 to 10," which concludes with a toilet flushing and an annoying voice-over. Mistakes in judgment aside, there is something formless about this album, something that blurs the tracks together in a meaningless way. Holdsworth has always been more of a distinctive than a strong composer, and the batch of tunes that he contributes here is not very compelling. The title track, with its power-chord verse, and his collaboration with singer Naomi Star, "Against the Clock," are his strongest moments. The presence of Hunt's "Dodgy Boat" helps but it is not enough to elevate this album to the level of Holdsworth's past successes. This is not to say that there is not meaningful music on Wardenclyffe Tower, because there is. "Against the Clock," which features not only Star's voice but also the drums of Vinnie Colaiuta, is one such success. Holdsworth makes use of the SynthAxe guitar synthesizer on several tracks on Wardenclyffe Tower, the most effective use of which is here, where his solo emerges from empty space in a constantly accelerating fashion, like a boulder rolling down a hill (although Holdsworth's ascending line sets forth the impossible scenario of falling upwards). All in all, however, there is a lack of dynamic movement in the soloists and the compositions in general. Of value to Holdsworth completists, but not of much interest to casual fans.
Allan Holdsworth, guitar, SynthAxe (on tracks 1, 3, 6)
Joel Schnebelt, spoken vocals (on track 1)
Naomi Star, vocals (on track 6)
Steve Hunt, keyboards (on tracks 1, 2, 4, 5)
Jimmy Johnson, bass
Gary Husband, drums (on tracks 2, 4), keyboards (on track 3)
Chad Wackerman, drums (on tracks 1, 3, 5, 7), keyboards (on track7)
Vinnie Colaiuta, drums (6)
Digitally remastered
Please Note: We offer this album in its native sampling rate of 48 kHz, 24-bit. The provided 96 kHz version was up-sampled and offers no audible value!