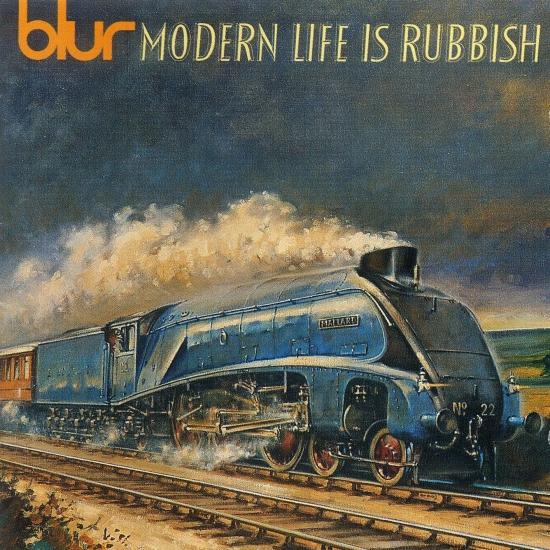 To celebrate the 21st anniversary of their debut release, Blur’s classic follow-up album Modern Life Is Rubbish has now been remastered from the original tapes by Frank Arkwright (The Smiths, Arcade Fire, New Order, Joy Division), with the remastering overseen by legendary original producer, Stephen Street.
Following „Leisure“, a debut featuring many exquisite moments of melody, Blur began their chameleonic artistic journey with „Modern Life Is Rubbish“, a record that eschewed massive sonic edifices and swirling harmonies for more basic guitar rock. However, there was little simple about the foursome's creations, as singer/chief-songwriter Damon Albarn fulfilled the promise he hinted at on the prior album: a Beatle-esque ability to pour an incredible amount of drama and adornment into small spaces and emerge with delectable pop.
Leadoff track "For Tomorrow," with its jangly guitar and "la la la la la" chorus sets the tone of the album as well as an opening song can. Its lyrics dance with a subtle complexity, examining optimism while mired in the repetition of modern life (and its rubbish) as renegade strings pop in at just the right points. It's the surprising little touches that really define the band and make Blur's concoctions soar above the rabble.
„Modern Life Is Rubbish“ is one of those records that improves with each listen, with the quiet brilliance of story-songs like "Colin Zeal," "Chemical World," and "Pop Scene" (a smart addition to the US release). „Modern Life Is Rubbish“ is a testament to Albarn's maturing songwriting gift and a tightly wrapped pop record simultaneously behind and ahead of its time.
"'Advert' and 'Pressure on Julian' anticipate the full-throttle indie-rock swerve on the '97 hit BLUR, with more Kinks and David Bowie in the clamor." (Rolling Stone)
"...[MODERN LIFE] looks great...it's a London odyssey crammed full of strange commuters, Peeping Thomases and lost dreams...you can put those idiot Suede comparisons away now..." (NME)
Damon Albarn, vocals, piano, keyboards
Graham Coxon, guitar, backing vocals
Alex James, bass
Dave Rowntree, drums
Additional musicians:
Kick Horns, brass (on „Sunday Sunday")
Kate St John, oboe (on “Star Shaped")
Recorded from October 1991 – March 1993 at various locations
Engineered by John Smith
Mixed by Simon Weinstock
Produced by Blur, John Smith, Steve Lovell, Stephen Street
Digitally remastered