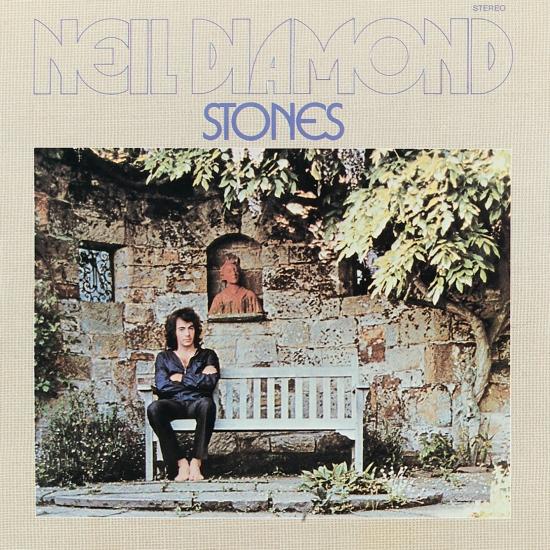 Neil Diamond put in plenty of hard yards to reach the superior status he enjoyed as an American songwriter and performer by the early 1970s. By then, a new album by the Brooklyn-born star was an event, and his seventh LP Stones, released in late 1971, was no exception. After debuting on the American chart on 13 November, and on its way to gold status for half a million sales, it hit the UK bestsellers on 11 December that year.
"Driven by the hit singles "I Am...I Said" and "Crunchy Granola Suite," Stones is a stronger album than most of Neil Diamond's late-'60s records. Instead of padding the album with mediocre originals, Diamond picked several fine covers to fill out the remainder of the album, including Roger Miller's "Husbands and Wives," Joni Mitchell's "Chelsea Morning," Leonard Cohen's "Suzanne," Randy Newman's "I Think It's Gonna Rain," Jacques Brel's "If You Go Away," and Tom Paxton's "The Last Thing on My Mind." There are still a few weak patches on Stones, but the record remains an engaging collection of mainstream pop." (Stephen Thomas Erlewine, AMG)
Stones was only Diamond’s third LP to make the UK countdown, but on both sides of the Atlantic, its success was fuelled by the powerful hit single ‘I Am…I Said,’ to this day one of the strongest entries in his entire songbook. It expressed the views of an artist who felt lost between the worlds of New York and Los Angeles.
“It was consciously an attempt on my part to express what my dreams were about, what my aspirations were about and what I was about,” Diamond later told Mojo magazine of ‘I Am…I Said.’ “And without any question, it came from my sessions with the analyst.”
When Stones arrived, it opened with that hit, which had reached No. 4 in both the US and UK. But unlike the album’s 1970 predecessor Tap Root Manuscript, on which he wrote all but song, this time he was only the composer of three of the ten selections. The others were the title track, which was simultaneously climbing the Hot 100 to reach No. 14 and listed as a double a-side with a third original, ‘Crunchy Granola Suite.’ A reprise of I Am…I Said’ rounded out the album.
Elsewhere, Neil chose to interpret his contemporaries and other favourites. He took Roger Miller’s 1966 hit ‘Husbands and Wives’ down to a reflective tempo and remade the work of such songwriting royalty as Joni Mitchell (‘Chelsea Morning’), Leonard Cohen (‘Suzanne’) and Randy Newman (‘I Think It’s Going To Rain Today’). The album also featured Diamond’s version of Jacques Brel and Rod McKuen’s much-covered and mournful ‘If You Go Away’ and folk figurehead Tom Paxton’s ‘The Last Thing On My Mind.’ (Source: www.udiscovermusic.com)
Produced by Tom Catalano
Digitally remastered