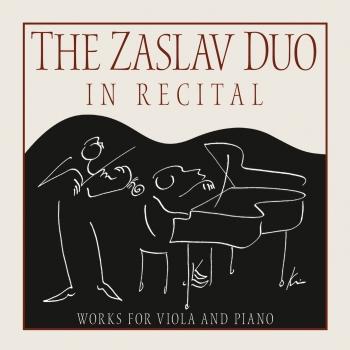 The Zaslav Duo
Bernard and Naomi Zaslav, performing as the Zaslav Duo, have attained a high level of recognition for their concerts and recordings of the viola/piano repertory. Since their Carnegie Recital Hall debut in 1962, they have been acknowledged as pioneers in their field in performances of the standard literature, transcriptions of such works as the Frank A Major Violin Sonata and an entire album of music by Dvorak, and premieres of new composition written for them.
Bernard Zaslav has performed as viola soloist and as a member of the Kohon, Composers, Fine Arts, Vermeer and the Stanford String Quartets. He has toured worldwide and has held faculty positions at New York University, Columbia University, Northern Illinois University, Stanford University and the University of Wisconsin-Milwaukee, where he was named Distinguished Professor. His discography currently includes 114 chamber works.
Naomi Zaslav, a pupil of Rosina Lhevinne at the Juilliard Graduate School, has appeared widely both as piano soloist and chamber-music artist. She has appeared frequently as guest artist with the Kohon, Composers, Fine Arts and Stanford String Quartets and with many other ensembles and artists, such as Barry Tuckwell. She was a faculty member at the University of Wisconsin-Milwaukee and Northern Illinois University (Assistant Professor-Piano and Accompanying). She has performed in many music festivals in Maine, California, Arizona and New Mexico and has given master classes on "The Heritage of Josef and Rosina Lhevinne" for the International Piano Workshop at the University of Hawaii. Her new solo album, entitled "The Intimate Brahms" (CD#1031, on the Music and Arts of America label) contains 19 of her favorites among the late shorter works, Intermezzi and Capriccios and Ballade.
In 1993, after departing from the Stanford music faculty and the Quartet, Mr. Zaslav became a Resident Artist at Stanford's Center for Computer Research in Music and Acoustics (CCRMA), using the digital editing and recording techniques learned there to produce a series of 5 CDs of viola/piano music by the Zaslav Duo for the Music & Arts Programs of America label.
The Zaslav Duo has given recitals in New York at The New School for Social Research, the Donnell Library, La Maison Francaise of New York University, the Village Gate, Brooklyn College, Carnegie Recital Hall, and Avery Fisher Hall at Lincoln Center. They have also performed at the Phillips Gallery in Washington, D.C., the June Music Festival in Albuquerque, New Mexico, UC-Davis, Stanford University, the College of Notre Dame in Belmont, California and at American Viola Congresses in Toronto, Canada and Redlands, California. They have recorded for Radio Freies, Berlin, Germany, WFMT, Chicago, University of Michigan at Ann Arbor, CRI and the Music & Arts Programs of America label.
Recordings by the Duo have received critical acclaim from Stereo Review ("Recording of Special Merit"), Devote magazine ("Debut Recording-Artist of the Year"), The STRAD, The New Records, The Los Angeles Times, American Record Guide,The New Records, Luister and Fanfare.