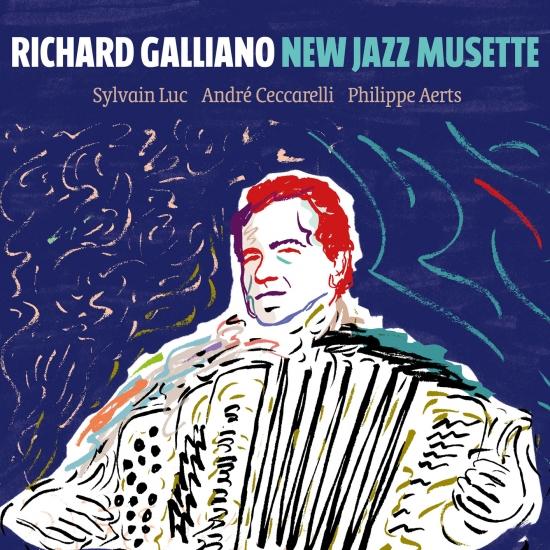 Already 30 years that his first album as a band leader, «Spleen», was released with the “New Musette” Quartet.
Already 30 years that he restored the image of a so called old fashioned instrument, bound to play for Saturday nights ballrooms!
Already 30 years that he is navigating in all kinds of musical styles, flirting with salsa, merging with tango, without losing his soul, deeply anchored in his French-Italian roots.
Only 5 years on the other hand that Richard Galliano started to express his incredible talent in the nest of classical music. One best-seller on the label Deutsche Grammophon with the ‘Bach Project’, then a tribute to Nino Rota and the Vivaldi “Four Seasons”, all titles released by the prestigious German label. Got even an award at the French “Victoires de la Musique” in 2014, as a composer.
Richard Galliano has chosen to celebrate his 30 years of career with his friends and gifted musicians: “I consider my record “Spleen” (1985) as my first “New Musette” project. 30 years after …it’s with that spirit that I feel like performing again my favourite compositions and introduce the “New Jazz Musette” The “Musette” is an old Italo/French style that makes Jazz musicians so ironically reluctant and afraid….
However the “Musette” (java, waltz …) in France, like the “Blues” in the States and the “Tango” in Argentina appeared all around the world at the same period of time, the beginning of the 20th Century. Those styles are all the fruits and the fusion of a human and cultural blend: Italians and French musicians for “Musette”, Italians and Argentinians for “Tango”, Africans and Americans for “Blues”. All those migrants, far from their motherland, cried through a new musical form, mixing rage and melancholia , so was the “Blues” in US, so was the “Milonga” in Argentina, so was the suburb complaints of the “Musette” in France.
“Piaf is the biggest Blues singer” said Louis Armstrong.
Nowadays, I create and recreate the “New Musette” because I feel that this music cannot be performed like in those years of the 30’s. I am playing this music now by joining in my strongest influences: PIAZZOLLA, COLTRANE, BILL EVANS, DEBUSSY…
Richard Galliano, acccorodion
Sylvain Luc, chitarra
Philippe Aerts, double bass 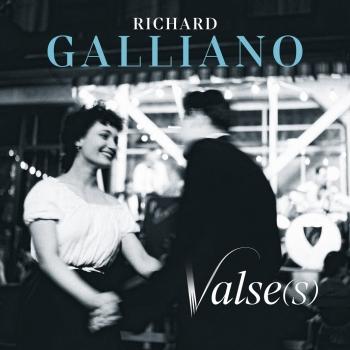 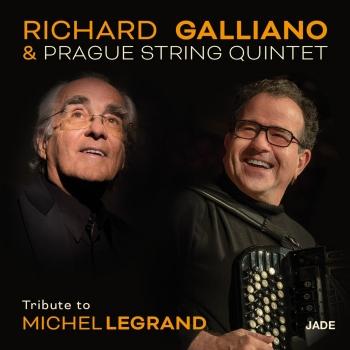 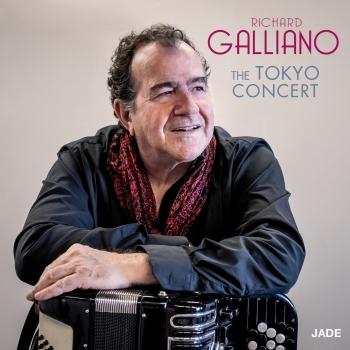 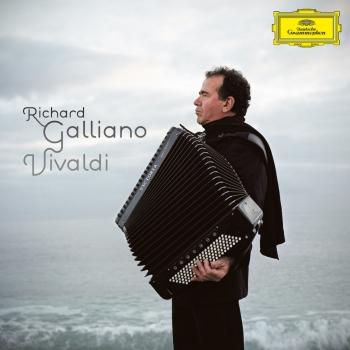 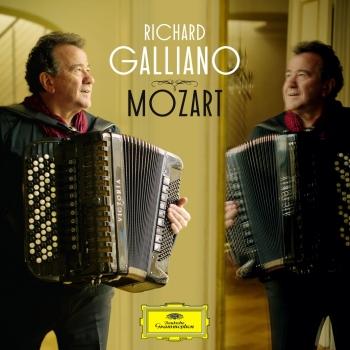 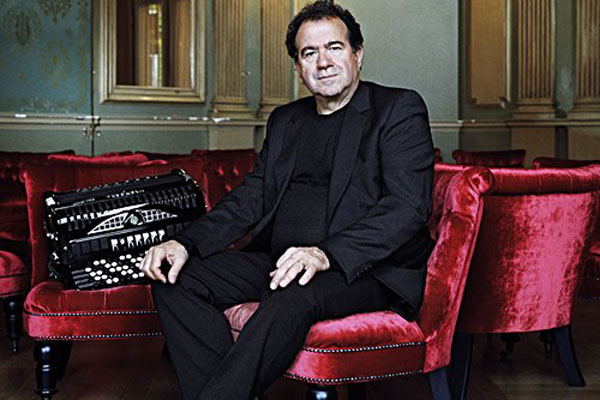 Richard Galliano
born 12 December 1950 in Cannes, in France. In the past, there never seemed to have been one great artist associated with the accordion, an instrument that, because of its connotations, seemed as far removed from swing as it is possible to be. Then along came Richard Galliano, fired by an unrivalled determination to share his conviction that the accordion was worthy to have a place at the heart of jazz alongside the saxophone and trumpet. Inspired by the admiration he felt for his friend Astor Piazzolla, creator of the Tango Nuevo, Galliano succeeded not just in doing this, but with his “new musette” style managed to breathe new life into a thoroughly French tradition that seemed to have got stuck. Son of the Italian-born accordion teacher Lucien Galliano, Richard started playing the instru¬ment at the age of four. At the same time as he was learning the accordion, he also studied harmony, counterpoint and trombone at the Nice Conservatoire. It was the discovery of the music of Clifford Brown that introduced him to jazz, at the age of 14, and while he picked up his style of playing choruses, he found, to his amazement, that the accordion was almost unknown in this type of music. Galliano then became interested in Brazilian accordionists like Sivuca and Dominguinhos, discovered the American specialists who approached jazz (Tommy Gumina, Ernie Felice and Art Van Damme), and the top Italian players, Felice Fugazza, Volpi and Fancelli, turning his back completely on the traditional style of playing that dominated in France. In 1973 Galliano moved up to Paris where he impressed Claude Nougaro. He spent three years as arranger and conductor as well as composer in a group where he found himself playing alongside real jazz musicians. He also played on countless recordings by popular French artists like Barbara, Serge Reggiani, Charles Aznavour and Juliette Gréco, and on film scores. From the beginning of the 1980s he was able to play much more often with jazz musicians from all backgrounds and improvise alongside them: these included Chet Baker (in Brazilian repertoire), Steve Potts, Jimmy Gourley, Toots Thielemans, the cellist Jean-Charles Capon, with whom he cut his first disc, and Ron Carter, whom he paired up with to make an album in 1990.
In 1991, following the advice of Astor Piazzolla, whom he had met in 1983 while working on incidental music for the Comédie Française, Galliano went back to his roots, and the traditional repertoire of Valses-Musette, Javas, Complaintes and Tangos that he had long disregarded. Taking a lead from the spirit of Gus Viseur and Tony Murena, he managed to rid the accordion of its old-fashioned image by working on the three-four rhythm, and introducing a whole new rhythmic concept and harmonic style to adapt it to jazz. He announced his new approach on the CD New Musette that he recorded with Aldo Romano, Pierre Michelot and Philip Catherine for Label bleu, and it won him the Académie du Jazz’s Django Reinhardt Prize for “French musician of the year” in 1993.
This led on to a whole series of albums where Galliano, playing his trademark Victoria accor¬dion, has shown his ease in adapting the instrument to the freedom of jazz. His assurance, mastery of phrasing, and ability to get a vast range of tone-colours from the accordion have meant that he has broken down musical barriers with an instrument that cuts across all genres. In 1996 he crossed the Atlantic to record his New York Tango with George Mraz, Al Foster and Biréli Lagrène, a disc that later won him a Victoire de la Musique prize. He started to gain an international reputation, and a host of new collaborations followed. He created some unusual instrumental pairings, getting together with artists ranging from Enrico Rava, Charlie Haden and Michel Portal (Portal’s 1997 disc Blow Up with him was a huge commercial success, selling more than 100,000 copies), to his fellow-accordionist Antonello Salis, in Italy, and the organist Eddy Louiss, in 2001. For years he played in a trio with Daniel Humair and Jean-François Jenny-Clarke (from 1993 until the death of the bass-player in 1998), and then returned to this format in 2004 with a “New York” rhythm, made up of Clarence Penn and Larry Grenadier. There have also been one-off collaborations with Jan Garbarek, Martial Solal, Hermeto Pascoal and Anouar Brahem, Paolo Fresu and Jan Lundgren, and Gary Burton, among others. In 1999 he presented his own compositions, with chamber orchestra accompaniment, together with pieces by Astor Piazzolla. This led to his 2003 homage Piazzolla Forever, in which he went back to playing the music of his mentor.
Galliano is an exceptionally versatile musician, able to make his mark in all kinds of musical contexts, from solo appearances (like the Paris Concert from the Châtelet, which came out in 2009), to playing with a big band like the Brussels Jazz Orchestra, in 2008. His exceptional abilities as a soloist are now well-recognized, and he continues to explore a vast range of music, without ever losing that lyrical quality that infuses the ballads on Love Day that he recorded with Gonzalo Rubalcaba, Charlie Haden and Mino Cinelu, or the “French touch” which allowed him to make the link between Billie Holiday and Edith Piaf, with the trumpeter Wynton Marsalis. Keen to pass on his wealth of experience, he is the author, together with his father Lucien, of an accordion method that won the SACEM prize for Best Pedagogical Work in 2009. (Vincent Bessières)