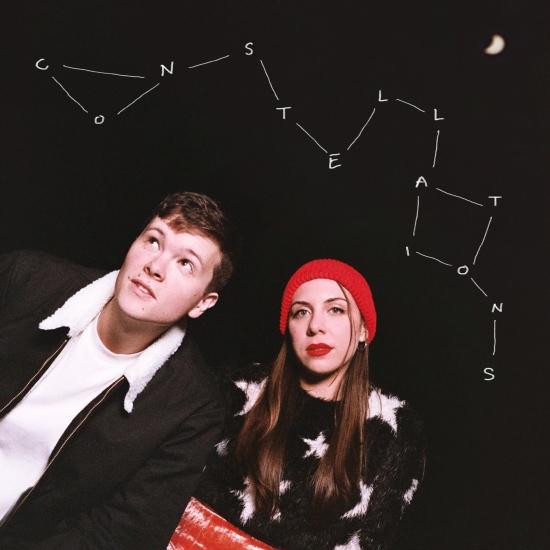 ChimyTina, the viral vocal-bass duo known for their innovative arrangements of jazz classics, remarkable interplay and creative DIY-approach return with their new full length album Constellations. Made up of New York-based vocalist Martina DaSilva (The Ladybugs) and much sought-after bassist Dan “Chimy” Chmielinski, ChimyTina first captured international attention in 2014 with the release of eye-catching duo performance videos, racking up thousands of views on social media. In 2019, the duo released their critically acclaimed debut A Very ChimyTina Christmas, which was praised by Rolling Stone and the New York Times for their “flexible chops and a gut-level creative connection”.
Constellations aims to expand ChimyTina’s already far-reaching musical sphere with notes of introspection and solitude paired with hopeful optimism. The duo introduces audiences to evocative arrangements of deeply swinging, soulful songs that span the decades of the jazz songbook to a pair of original compositions by DaSilva. Alongside the two charismatic bandleaders, Constellations features performances by a handful of very special guests including vibraphonist Joel Ross, trumpeter Marquis Hill, saxophonist Grace Kelly, guitarist Andrew Renfroe, saxophonist Lucas Pino, and cellist Ken Kubota.
“A good word for this album is trust,” reflects Chmielinski, thinking back to their recording sessions in April 2021. “We’re trusting that the world will return, that we’ll be able to do what we love again. It was a very visceral, raw reaction to what was happening to us.” Constellations is an LP that looks inward while also, befitting of its name, draws on an almost cosmic perspective of the human experience.
A jovial start to the record, Chmielinski and DaSilva both strongly identified with the optimism and upbeat nature of the familiar jazz standard “I Want To Be Happy”. Marquis Hill, with his buttery tone and phrasing perfection was an obvious choice for the track. The call and response section introduces the interplay and lyrical fun both DaSilva and Chmielinski enjoy including in their singular arrangements. Also featuring Hill is Chmielinski and Martina’s take on the Chaplin-penned classic “Smile”. A half time 6/8 feel is introduced by the bassline in this piece, which remains consistent throughout, followed by a double-time second half of each section, as if to state that the happier times always seem to move faster. Remembering to smile and be grateful for all that one has during times of strife is something that resonated with both musicians, and the sensitive stylings of Marquis Hill was yet again an obvious choice for the poignant song.
A common thread throughout the ChimyTina discography is the nod to Martina’s Brazilian heritage. Here, this is realized on “As Praias Desertas,” a lesser known Antônio Carlos Jobim composition. Augmenting this entrancingly beautiful arrangement is Ken Kubota whose versatility as both a classical cellist and accompanist, with his guitar-like strumming mastery, shaped the arrangement into a full-fledged spectacle that paints a vivid image of “deserted beaches”.
DaSilva’s original compositions “Twin Flame” and “My Universe” present an ethereal theme to the release, and demonstrate her stunning acuity for composition. “Twin Flame” has a classic sound and a fullness that comes from DaSilva’s warm vocals and the support of multi-tracked bass. DaSilva’s lyric reflect’s life’s search for answers, looking to the spirits, questioning the stars and searching for facts, stating that “science is her guiding light”; a principle she wished more people would have adopted throughout the pandemic. “My Universe” features renowned vibraphonist Joel Ross, and is a dark, emotional reflection of the New York experience. The piece, written many years ago by the vocalist, felt apropos in light of recent events. The magical stylings of Ross help solidify an emotional ballad that carries both the gravity and awe felt by both bandleaders during their time in the Big Apple.
“Deep Night” and “It’s All In Your Mind”, both featuring guitarist Andrew Renfroe, are reimagined jazz compositions from yesteryear that seem to delve into the inner world of the composer while “Deep Night” makes allusions to the night sky, fitting for the theme of this release. Renfroe fits into the duo’s sound with ease, supporting DaSilva’s soaring vocals and giving the pieces new life with the addition of his unique and melodic sound. Classic jazz standards “I’ll Never Be The Same” and “Nice Work If You Can Get It” are interpreted here with the addition of saxophonist Lucas Pino who offers shimmering countermelodies and virtuosic improvisation. Another highlight is the classic “Trouble in Mind”, delivered with saxophonist Grace Kelly. “Inspired by the Nina Simone rendition, this take is a reminder that music is one of the most cathartic expressions of joy in the face of strife. It is clear throughout that the joy and improvisatory nature of the song exudes an attitude of rolling with the punches and continuing to be grateful for the lives we live,” shares DaSilva.
The album finale features a triple-bass arrangement of a song near and dear to both Chmielinski and DaSilva: Billy Strayhorn’s “Lush Life”. Here, Chmielinski aims to invoke awe, reflection and elegance in a fresh take on a classic recorded so many times. Inspired by his upbringing around bass ensembles, the bassist demonstrates both accompaniment, lyrical bowing and a virtuosic solo aiming for nothing short of an authentic relationship that he has to this song.
Constellations is a welcomed return to ChimyTina’s musical ethos, with thoughtful arrangements and original compositions that, threaded with cosmic themes of the outer world, offer audiences a soulful journey through the inner world of this innovative, of-the-moment musical duo.
Martina DaSilva, voice
Dan "Chimy" Chmielinski, double bass
Joel Ross, vibraphone 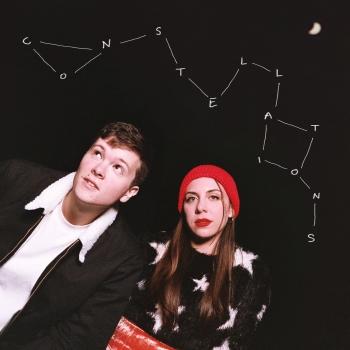 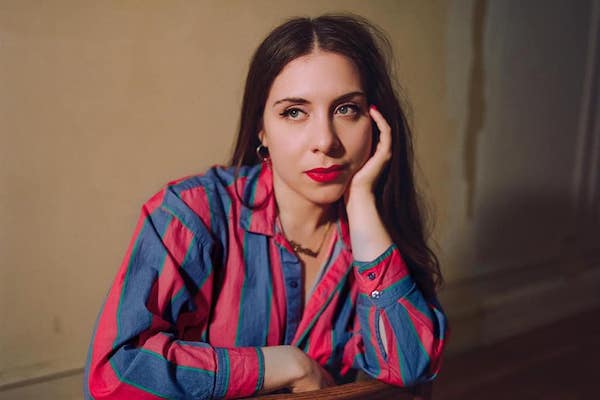 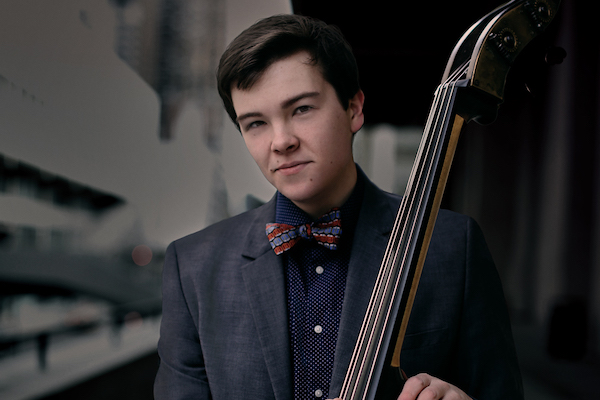 Martina DaSilva
Jazz vocalist Martina DaSilva, a New York City native, captivates audiences with her signature blend of daring technical virtuosity and expressive emotional sensitivity. Drawing equally from the styles of early jazz, opera, and chamber music, her musicality transcends conventional genre labelling. As a Brazilian-American, Martina also has a passion for performing the works of Brazilian composers. DaSilva actively performs with her own group in addition to leading the jazz vocal harmony group, The Ladybugs. Martina has received high praise for her performances at the Kennedy Center, the Bern International Jazz Festival, the Blue Note Jazz Festival, the NYC Hot Jazz Festival, Jazz At Lincoln Center’s Generations in Jazz Festival, and the NY Winter Jazzfest.
Dan “Chimy” Chmielinski
is a New York Times critically acclaimed, award winning bassist, composer, synthesist, sound designer and bandleader who consistently creates original projects under his own brand, Chimy Music. Currently based in Los Angeles, Dan maintains a bi-coastal schedule comprised of live performances, film scoring, and music production. His recent film scoring accolades include music composed for, “The Exiles,” a documentary produced by Steven Soderbergh and Chris Columbus, which garnered a Grand Jury win at the 2022 Sundance Film Festival. Dan founded and leads several groups of his own, including “Four by Four,” an octet innovatively showcasing jazz quartet alongside string quartet, and “Circuit Kisser,” an electronic ensemble consisting of five synthesizers, electric bass and drums, combining jazz harmonies and electronic music; both showcasing Dan’s original compositions.
Dan teamed up with vocalist Martina DaSilva to form the viral sensation, “ChimyTina,” a bass and vocal duo featuring tight-knit arrangements of classic jazz standards, folk tunes and popular music. In December 2019, ChimyTina released the winter holiday-inspired album A Very ChimyTina Christmas. The album received critical acclaim from Rolling Stone, NPR, The New York Times and more. Their upcoming album, Constellations, is set for release in June of 2022.
He began playing bass at age three, initially utilizing a toddler-sized acoustic bass his parents created using a half-size cello with bass guitar strings. Dan received his master's degree in jazz studies from The Juilliard School in 2017 where he also earned his bachelor's degree studying under the great Ron Carter. Wynton Marsalis once publicly referred to Dan as, "a young star of jazz," and considers him to be one of the most serious musicians of his generation. Proficient in many genres, Dan’s diverse background has allowed him to record and perform with country music sensation Kelsea Ballerini on national television, accompany the stars of Broadway’s, “Hamilton,” record on the soundtrack of Woody Allen’s, “Cafe Society” and perform for members of the royal family. Dan has traveled the world performing, collaborating and recording with world class musicians such as Wynton Marsalis, Joey Alexander, The Jazz at Lincoln Center Orchestra, Marc Cary, Billy Childs, Dianne Reeves, Veronica Swift, Brad Mehldau, Chase Baird, Jon Batiste, Beka Gochiashvili, Ulysses Owens Jr., Etienne Charles, Bryan Carter, and Eric Harland to name a few.
He has performed around the globe and has graced prestigious venues and festivals including The Hollywood Bowl, Chicago Symphony Center, The Newport Jazz Festival, The Monterrey Jazz Festival, The Umbria Jazz Festival and the Ravinia Festival. He has been continuously inspired and mentored by some of the world’s greatest musicians, including Richard Davis, Ben Wolfe, Jason Heath, Carlos Henriquez, Jay Anderson. Dan was one of 15 musicians selected to participate in Ravinia’s prestigious Steans Institute, where he collaborated with jazz masters David Baker, Nathan Davis, Curtis Fuller, and Rufus Reid. Dan plays and endorses Pirastro Eudoxa strings.
As a composer, prolific in both scoring for film as well as concert music, he was one of 8 composers selected to participate in BMI’s, “Composing for the Screen” film scoring mentorship, under the guidance of acclaimed media composer Rick Baitz. He has also studied with composers Philip Lasser, Kendall Briggs and Edward Bilous. Dan has gone on to score short films, features, and documentaries. In 2021, Dan’s arrangement of Laurin Talese’s, “This Love,” was performed by members of the Philadelphia Orchestra. His experiences in scoring and composition introduced him to the world of sound design and synthesizers. Dan currently owns over 30 analog synthesizers, new and old, and is a member of sampling company 8Dio’s sound design team. He regularly serves as an on-screen personality in their demos and tutorials for their revolutionary program, Soundpaint.