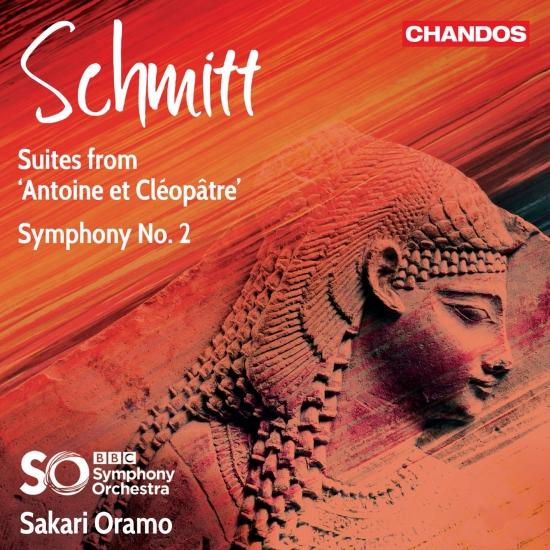 Making his debut on Chandos, Sakari Oramo, who with the BBC Symphony Orchestra this year has championed new and rarely performed works, presents in surround sound the extravagant musical world of Florent Schmitt.
The recording follows two exceptional Barbican performances with the same forces, a ‘sensuous and exotic’ Antoine et Cléopâtre, according to the Financial Times (2016), and the first performance for nearly a dozen years of Symphony No. 2 (2017).
The Second Symphony, the last major work by Schmitt, has nothing valedictory about it: as lavish and rhythmically sophisticated as his earlier music, emphatically bounding in fast passages and supple in slow, it also encompasses all the different musical expressions and styles that he had used over almost eight decades of composing. On the other hand, it is far from being an ‘old man’s piece’. ‘It is really exuberant — very, very inventive, and incredibly busy for everyone’, as Sakari Oramo explained in a BBC Radio 3 interview.
The symphony is paired with the two orchestral suites from Antoine et Cléopâtre, music written for Shakespeare’s play, premiered in 1920 at the Paris Opéra, and very rarely recorded since then.
"... music-lovers will be entranced by these colourful and fascinating scores, which are, moreover, supremely well-played and recorded, Sakari Oramo proving himself yet again a master-conductor in obtaining such outstanding playing." (Robert Matthew-Walker, ClassicalSource)
“… The recording can only be described as sumptuous, with this intricately scored music revealed in great detail without any hint of dryness in the acoustic. Not for nothing are Chandos renowned for their recording skills, and under the baton of their Chief Conductor, the orchestra play with the virtuosity necessary for the listener to be able to luxuriate in Schmitt’s orchestration…” (Jim Westhead, MusicWeb-International)
“… he’s [Oramo] is convincing and persuasive in this work [Symphony No. 2] too, and helped by superior playing and engineering – advantages that certainly pay dividends in these scores. Recommended.” (Hugo Shirley, Gramophone magazine)
BBC Symphony Orchestra
Sakari Oram, conductor