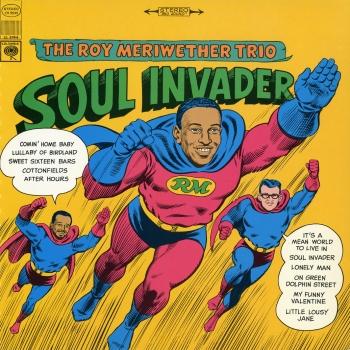 Roy Meriwether
A multi-dimensional and self-taught virtuoso, Roy Meriwether blends jazz, blues, and gospel with classical elements in a unique and innovative style that has drawn enthusiastic crowds to night clubs, colleges, and concert halls across the country.
Born in Dayton, Ohio, Mr. Meriwether started playing piano at the age of three and had composed two pieces before he was four. Shortly thereafter, he began playing in his father’s church, accompanying the family choir, and performing with gospel singers throughout the Midwest.
Mr. Meriwether turned professional with his own group at age 18 and has devoted himself to both composing and performing ever since. Reviewers are frequently impressed by his power. Critic Arnold Shaw once described him as a “two-fisted pianist who in this day of right-handed wizards has the sound of a champion, with thunder in his left hand and lightning in his right.”
As recently reported in the Scottsdale, Arizona Daily Progress: “Mr. Meriwether performs both standards and original compositions with a creativity that is nothing short of genius. Meriwether himself is the epitome of a ‘giving’ musician, at his best with a responsive, listening audience. He does not require it, but appreciates it and rewards it with dynamite delivered with the power his hands produce.”
In 1973, the National Endowment for the Arts bestowed on Mr. Meriwether a Jazz Composition Fellowship Grant for the purpose of writing a musical work tracing the history of the black experience in America. The scope and breadth of the project resulted in the 21-piece suite, BLACK SNOW, written and premiered for the United States Bicentennial Celebration, April, 1976, with the Howard Roberts Chorale and the Dayton Contemporary Dance Guild.
Living in New York City since 1976, Roy continually elicits standing ovations from his audiences. He is frequently called upon to compose specific works for special events such as the November, 1989 NAUBA Salute to Women Conference in the Bahamas, where he performed his piece, “A Tribute To You, My Lady.”
He has received numerous awards including Jamaica Queens New York Jazz Community Award, the New York Manhattan Association of Cabaret Award (MAC Award), and has been considered for a Grammy nomination. In March of 1999, Mr. Meriwether received a Lifetime Achievement to Music Award.
Mr. Meriwether's sound is unmistakable and his music is timeless! His latest releases “The Art Of The Groove”, "Inspiration", "Live at John Word's", and "Live at Gordy's", and he continues to tour regularly throughout the US and Europe.