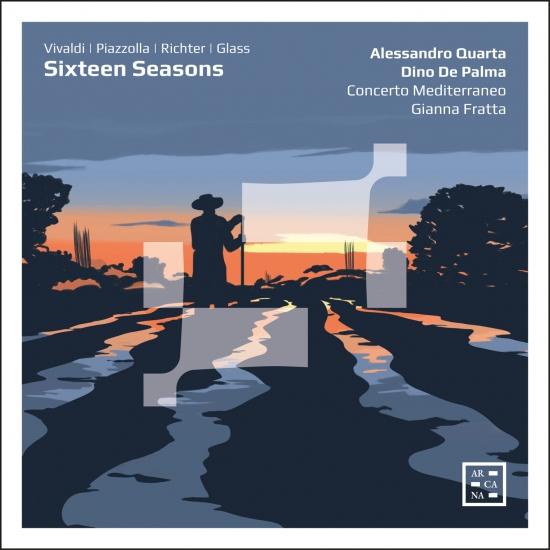 After its rediscovery in the second half of the 20th century, Vivaldi’s Four Seasons has become so popular that it has become a model of inspiration for similar collections that have the same subject matter, use similar instrumental forces and, often, are commissioned to be played alongside the original.
Issued in conjunction with the thirtieth anniversary of the death of Astor Piazzolla (4 July 1992), Sixteen Seasons brings together on disc for the first time the four most famous Four Seasons : hence alongside Vivaldi’s Italian concertos, also the Argentinian Cuatro Estaciones Porteñas of Piazzolla (in the version by Leonid Desyatnikov, a composer of Ukrainian origin), The American Four Seasons of Philip Glass, and the “Vivaldi recompositions” of British Max Richter. To guide us through these seasons – which are spread over different continents, climates and musical styles – is Concerto Mediterraneo, an ensemble made up of musicians from all over Italy and directed by Gianna Fratta, while the eclectic Alessandro Quarta shares the solo violin role with Dino De Palma.
The liner notes by historian Alessandro Vanoli and meteorologist Luca Mercalli complete a project that also stands as a reflection on the profound relationship between man and the alternation of the seasons and the role played by climate change from Vivaldi’s day to the present.
Alessandro Quarta, solo violin
Dino de Palma, solo violin
Concerto Mediterraneo
Gianna Fratta, conductor 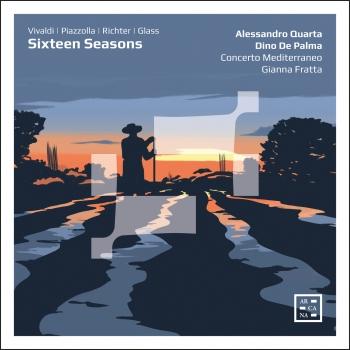 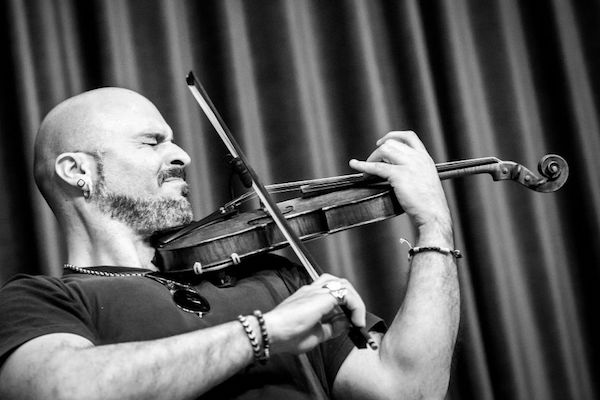 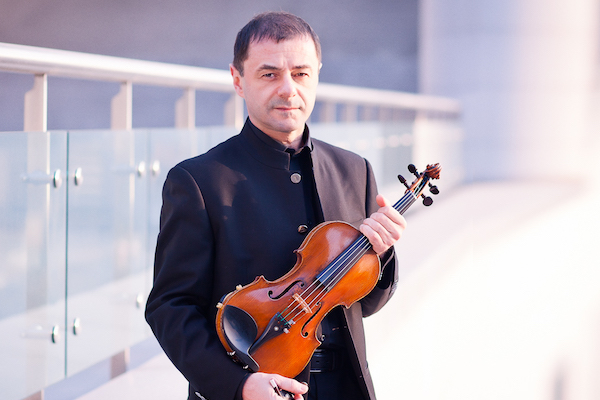 Alessandro Quarta
played the violin as a backing artist, soloist, jazz and arrangement violinist with various artists such as: Carlos Santana, Laura Pausini, Lucio Dalla, Mark Knopfler, Eros Ramazzotti, Antonello Venditti, Boy George, Dionne Warwick, Henri Salvador, Fiorella Mannoia, Francesco De Gregori, Adriano Celentano, Shakira, Riccardo Cocciante, Lionel Richie, Celine Dion, Gianni Morandi, Liza Minnelli, Renato Zero, Andrea Bocelli, Gianna Nannini, Zucchero, Joe Cocker, Tiziano Ferro, Lenny Kravitz, Jovanotti, Amy Stewart and Robbie Williams.
From 2005 to 2008 Alessandro Quarta played as the second and first violinist with the Toscanini Symphonic Orchestra under the direction of Lorin Maazel as well as in some of the most important theaters in the world under the direction of Maestri E. Inbal, C. Dutoit, M. Rostropovich, M.W. Chung, G. Pretre, Y. Temirkanov, K. Masur, Z. Metha.
The project which made Alessandro Quarta famous worldwide is his arrangement and performance on "Astor Piazzolla". He recorded "Alessandro Quarta plays Astor Piazzolla" with the german producers team of IAN-Productions who have already been involved in numerous surround productions, including Grammy nominations and prizes. They are among the best producers in the world regarding 3D immersive sound. The album is one of the first jazz albums in the world to be recorded in 3D immersive.
Alessandro Quarta plays a "Giovanni Battista Guadagnini" violin of 1761.
Dino de Palma
achieved the diploma in violin at the Frosinone Conservatory of music with full marks and honours (10/10 and lode), the diploma in viola at the Bari Conservatory of music with full marks (10/10) and he is graduated as bachelor of Arts with a major in fine art, music and drama from the Roma Tor Vergata University with full marks and honours (110/110 and lode).
First violin of the Solisti Dauni for over fifteen years, De Palma toured abroad and gave concerts in important Italian locations, as well as numerous records and premier performances worldwide. First violinist of the Petruzzelli Theatre Orchestra from Bari, the Marchigiana Philharmonic Orchestra, the Chamber Orchestra of Bologna, the Umberto Giordano symphonic Orchestra, the Daunia Philharmonic Orchestra, he also collaborated with the symphonic orchestras of RAI in Rome, Turin and Naples, Royal Theatre of Parma, the Fenice in Venice and with the chamber group “I Solisti Aquilani” with which he went on tours abroad (Germany, Spain, Turkey, Egypt, etc.) and he played numerous concerts during the four years of collaboration. He collaborates with the chamber group “The Philharmonics of Rome” already known as the “Chamber orchestra of Saint Cecilia” with which he performs many concerts with Uto Ughi in various tours in Italy and abroad (Spain, Malta, Japan, etc.) and he is a violinist of the group “I solisti di Pavia” directed by Enrico Dindo with which he went on important tours that brought him to perform in Moscow, St. Petersburg, Vilnius, New York and other capital cities.
At the same time De Palma carries out many activities as soloist and in this role he has played for important concert societies in Italy and abroad (Australis, Taiwan, Turkey, Sweden, Lithuania, India, France, Japan, Korea and other nations), playing with many orchestras all over the world the most important pieces of the repertoire for violin and orchestra. As soloist he performed in very important concerts halls such as Carnegie Hall in New York, Smethana Hall in Prague, Seoul Art Center in South Korea, Coliseum Theatre in Buenos Aires etc.
For cinema he collaborates with musicians such as Morricone, Bacalov, Piovani together with which he realised soundtracks for movies by Oliver Stone, Warren Beatty, the Taviani brothers, Adrian Lyne, Pupi Avati and many other film writers. He has toured with prestigious people such as Jerry Lewis, Bart Bacarach, Liza Minnelli, Andrea Bocelli, Placido Domingo and others. He also collaborated with the Festival di Umbria Jazz playing with Charlie Haden. He has recorded for BMG, Bongiovanni in Bologna, Velut Luna from Padua and many other Italian record companies. In the next future he will play in U.S.A., Europe, Japan and Korea as soloist with many orchestras.
De Palma is a violin professor at the Conservatory “U. Giordano” in Foggia and visiting professor at the University of Sungshin in Seoul (Korea) for master classes in violin and chamber music.