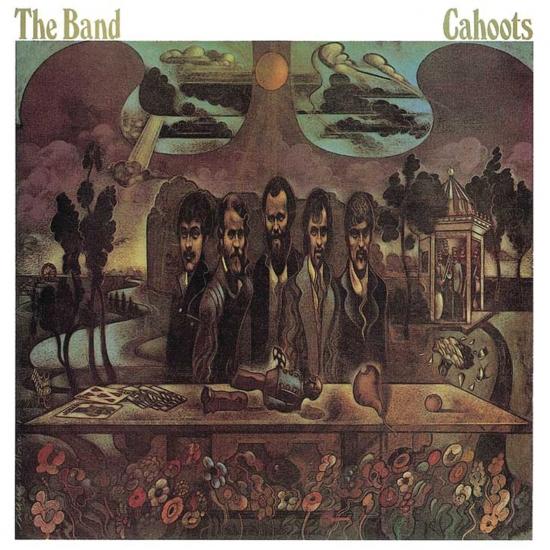 Cahoots is the fourth studio album by Canadian/American rock group the Band. It was released in 1971 to mixed reviews, and was their last album of original material for four years. The album's front cover was painted by New York artist/illustrator Gilbert Stone, while the back cover features a photograph portrait of the group by Richard Avedon. The album features guest vocals from Van Morrison. Libby Titus, Helm’s common-law wife at the time and mother of their daughter Amy Helm, also contributed uncredited backing vocals to "The River Hymn", the first time a woman appeared on a Band album.
"Cahoots was the first album recorded at Albert Grossman's Bearsville Studios in Woodstock. The sessions were difficult, as the studio was still having the bugs worked out and the Band was experiencing internal problems. Robertson's songs had become much more difficult; the structures, chord changes, and arrangements were increasingly complex. Despite these factors, the album has a number of gems, including "Life Is a Carnival" with its great Allen Toussaint horn arrangement, Dylan's "When I Paint My Masterpiece," a duet between Richard Manuel and Van Morrison entitled "4% Pantomime," "The River Hymn," and "Where Do We Go from Here." (Rob Bowman, AMG)
Rick Danko, bass, vocals
Levon Helm, drums, mandolin, guitar, vocals
Garth Hudson, organ, accordion, saxophones
Richard Manuel, piano, drums, vocals
Robbie Robertson, guitars, vocals
Digitally remastered