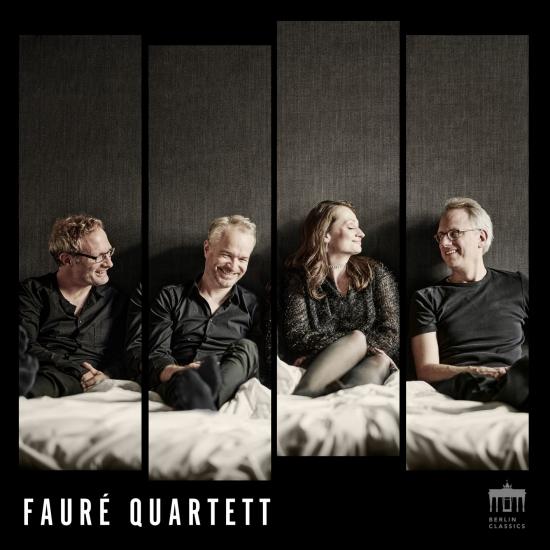 If a chamber music ensemble can stand together in the same lineup for 25 years, it must be doing something right. The Fauré Quartett can be assumed to be doing so: As one of the world's leading piano quartets, the for musicians are at the zenith of chamber music, touring the world's most important venues and breaking down musical boundaries with their recordings. Their Pop Songs album was followed by Mussorgsky’s Pictures at an Exhibition and Rachmaninov’s Études-Tableaux in 2018, which have never been heard so rousingly before. On the occasion of the 25th anniversary of its foundation, the quartet turns its attention to a composer who is at the same time both long overdue and right now perfectly fit to be recorded properly: Gabriel Fauré.
“The individual members of our group are really closely connected, and this carries a risk: maintaining just what music such as Fauré’s needs, the unpredictable, a sense of flight, of lightness of being, but also the depth that lies within it,” comments Dirk Mommertz as he prepares to re-engage with the composer’s piano quartets, works which at their core start from the beginning without actually ever being at the beginning. “One discovers much that is wonderful in Fauré’s music, from the darkest depths in the slow C minor movement, to the airiness and cheerfulness of some of the art songs we arranged and recorded”, says Mommertz, adding how he finds it “incredibly challenging to cope with such emotional fluctuations along with all the imponderables as a member of an ensemble that has been rehearsing this music for over twenty years now. But it is exactly this that has perhaps driven us to rethink just about everything as much as possible. You have to look for a truth that offers validity.”
The Fauré Quartet has fond memories of these phases of self-exploration and laying the foundations of a piece. The quartet was able to afford the luxury of independent maturity, and managed to transform the apparent shortcoming of such a fixed instrumentation into a quality. It is not a trio that treats itself to a pianist, neither is it a string quartet that gives one violin a temporary leave of absence, and nor is it a piano soloist who enhances inherent keyboard timbres by augmenting these with a few extra string players. It remains an ensemble that takes itself seriously in its particularity and benefits from the qualities of four characters who can stand up to each other even over long stretches of time. And it is a team that does not see itself as too superior not to practice the same thing over and over again until a point is reached at which an invisible boundary is crossed, one that leads from mere interpretation to actual embodiment. After a quarter of a century, this constellation of players has succeeded with Fauré. Which does not mean that the music performed on stage or encountered in the next musical melee will not sound different again. And why not, for this is all about the flow of sonic events.
Fauré Quartett 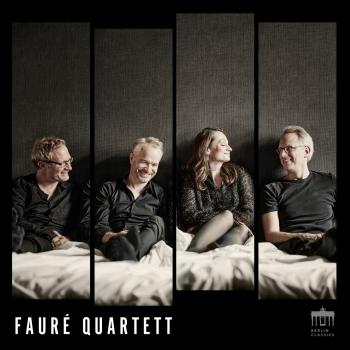 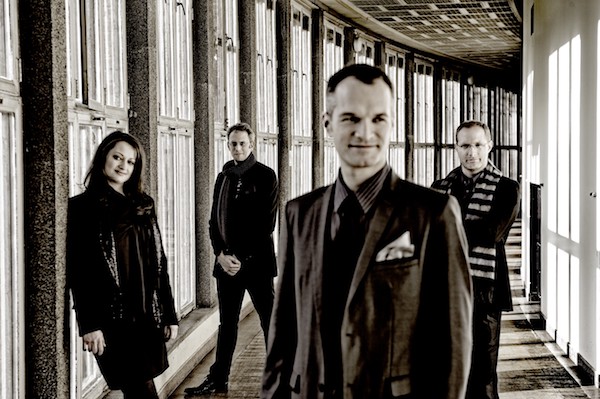 Fauré Quartett
The requirements have changed. Whoever is playing chamber music today can’t be limited to the rules from decades ago. The expectations regarding the diversity of repertoire have changed, which creates room for ensembles like the Faure Quartett, which has established itself as one of the world’s leading piano quartets within just a few years. Dirk Mommertz (piano), Erika Geldsetzer (violin), Sascha Frömbling (viola) and Konstantin Heidrich (cello) use the opportunities arising from these developments. They discover new sound fields in chamber music and perform compositions outside the mainstream repertoire.
They are visionary in their approach and highly regarded for their experiments and discoveries; be it performances with the NDR Big Band, collaborations with artists like Rufus Wainwright or Sven Helbig, appearances in clubs like the Berghain, Cocoon Club or “Le Poisson Rouge” in New York or TV shows in KIKA or “Rhapsody in School”, getting children excited in chamber music. When they released their album “Popsongs” in 2009, there was a great deal of buzz in the press and audience. In the following year, the ensemble was awarded the ECHO Classic for their album “classic beyond borders”, their second award after their recording of Brahms’ piano quartets (Chamber Music recording of the year, 2008). Other prizes include the German Music Competition, the ensemble prize from Festspiele Mecklenburg-Vorpommern, international competition and recording awards, Music Prize Duisburg and Brahms prize Schleswig Holstein.
The musicians of the Faure Quartett are pioneers in many ways. After they met during their studies in 1995 in Karlsruhe for the 150th anniversary of Gabriel Faure, they quickly realized, that this combination offered new insights into undiscovered repertoire. In 2006, they signed a contract with Deutsche Grammophon, promoting them to the Champions League of the classic music business. They made highly regarded benchmark-recordings with works by Mozart, Brahms, Mendelssohn and pop songs from Peter Gabriel and Steely Dan.
Worldwide tours raise their profile abroad and international masterclasses are part of their work with students. The members teach at the universities of Berlin and Essen. Moreover, they are Artistic Directors of “Festspielfrühling Rügen” as well as ‘Quartet in Residence’ at the University of Music Karlsruhe. During their tours, the musicians appear in the world’s most important chamber music venues; including Concertgebouw Amsterdam, Alte Oper Frankfurt, Berlin Philharmony, Teatro Colon Buenos Aires and Wigmore Hall London. All these mosaics form a unique profile for this defining chamber music ensemble.