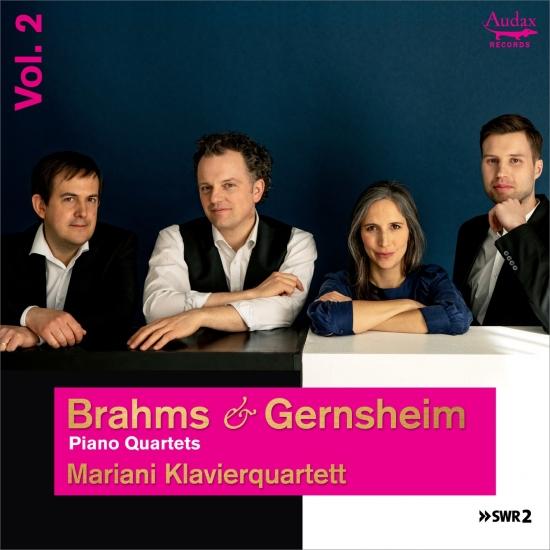 After the Diapason d'Or-winning first album, the Mariani Piano Quartet continues its journey of discovery, juxtaposing the piano quartets of Johannes Brahms with those of Friedrich Gernsheim. The ensemble is dedicated to the now almost forgotten friendship between the two composers. Although this second album is dominated by Brahms' light-flooded A major quartet - his longest - and although the friendship of the two composers is at the centre of this three-part project, Gernsheim's F major quartet in particular shows that not only Brahms was among his influences, but that he was also able to blend echoes of Beethoven, Mendelssohn and Schubert into a convincing personal style. In the hands of the Mariani Piano Quartet, the formal perfection of his urgent work shines with unimagined power.
Gernsheim, a Jewish child prodigy educated at the renowned Leipzig Conservatory, held important positions in Saarbrücken, Berlin, Cologne and Rotterdam after several years in Paris. Equally esteemed as Brahms during his lifetime, Gernsheim's musical legacy fell victim to the anti-Semitic climate in Europe after his death in 1916.
Johannes Brahms first met Friedrich Gernsheim in 1862 at the Cologne Music Festival. Some time later, in 1868, both composers had the opportunity to get to know each other better: Brahms spent that summer in Bonn, Gernsheim was at that time a teacher at the conservatory in Cologne and conductor of various choral societies - an occasion for both composers to visit each other to discuss their latest works and to get to know each other better.
"Brahms' piano quartets have been with us since the beginning of our careers," says violinist Philipp Bohnen, "we really wanted to record these three milestones of chamber music literature. But the question was, of course, in what form, when and also: why?" Not only Brahms' music should play a role in the recording, but also his life and his environment. In this search, the quartet came across Friedrich Gernsheim, who maintained a lively correspondence with Brahms and whose music the ensemble experiences as a "wonderful discovery". Born in Worms in 1839, he grew up in a world full of music. He became not only a composer, but also a conductor and pianist. Far too rarely are his works, which were lost under the National Socialist dictatorship, still brought to concert halls. His Piano Quartet in C minor op 20 demonstrates a balance between freshness and depth and clear instrumentation that wonderfully carries the listener along. Not only was Brahms a friend and enthusiastic supporter of Gernsheim, he was also highly regarded by the music world at large. Gernsheim is a master of the elegant, long melody", says Philipp Bohnen, "Brahms, however, gives his melodies another dimension that perhaps only he was able to compose in this way".
Brahms & Gernsheim - Piano Quartets is a rousing musical journey back in time to the Romantic era that takes you into the exciting world of inspiring friendships.
Mariani Klavierquartett 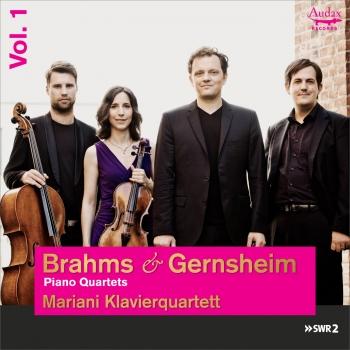 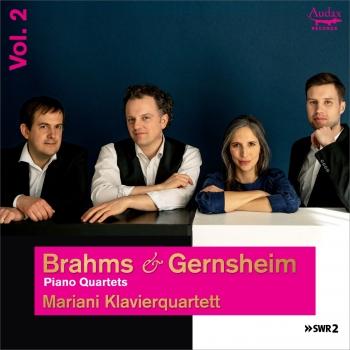 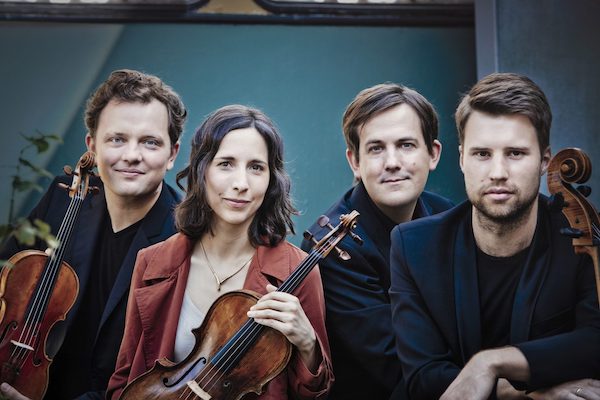 Mariani Klavierquartett
The four members of the Mariani Piano Quartet were still studying in Berlin when they first made each other’s acquaintance as chamber recitalists, and their first joint concert at the Hagnau Classical Music Fes- tival on Lake Constance persuaded them to continue to perform together . The Mariani Piano Quartet finally came into existence in the wake of an intensive period of working together at various chamber music festivals in the autumn and winter of 2009.
The Mariani Piano Quartet first came to the attention of a wider audience at the German Music Competition in the spring of 2011. Their first CD, Phantasy, featuring works by Bridge, Martin and Schumann, followed two years later.
The press praised the performers’ “spirit and passion”, their “vitality and delight in their playing” and their “urgent intensity”, adding that they had poured their “lifeblood into literally every note” and concluding that “although they are still young, they already perform with masterly maturity”. Among the venues and festivals where the Mariani Piano Quartet has already been invited to appear are the Ludwigsburg Castle Festival, the Schleswig-Holstein Music Festival, the Mecklenburg-Vorpommern Festival, the Luxembourg Philharmonie, Leipzig and the Beethovenhaus in Bonn, while their debut recital at the Berlin Philharmonie was broadcast live by the arts channel Deutschlandradio Kultur. Further recordings were made in connection with their concerts for North German Radio NDR and South-West Radio SWR.