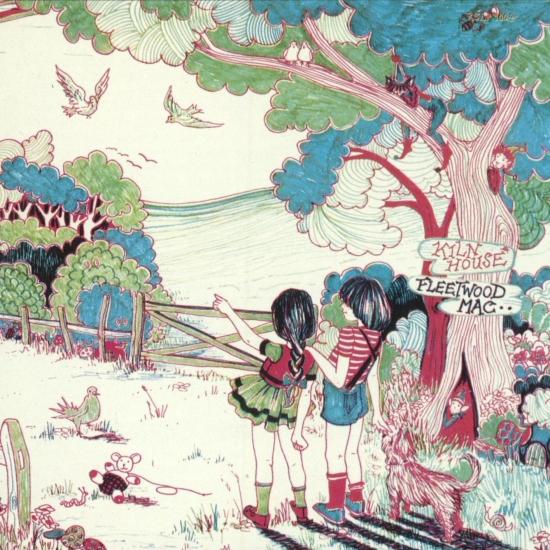 „Kiln House“ is the fourth album by British rock band Fleetwood Mac, released in 1970. This is the first of the post-Peter Green Fleetwood Mac albums, and their last album to feature Jeremy Spencer. Christine McVie was present at the recording sessions and contributed backing vocals and cover art, although she was not a full member of the band until shortly after the album's completion.
Spencer's retro 50s homages and parodies dominate the album, but Danny Kirwan's more sincere songs are almost equally prominent. "Buddy's Song" is credited to Buddy Holly's mother, but is basically the song "Peggy Sue Got Married" with new lyrics listing a number of Buddy Holly song titles.
The Fleetwood Mac of 1970, before Lindsay Buckingham and Stevie Nicks joined the group, was primarily a British blues band. Fleetwood Mac continues today as one of the most enduring and successful rock bands in history.
„Fleetwood Mac was still primarily a blues band on this, their first album after the departure of founder/nominal leader Peter Green. But the remaining members, Mick Fleetwood, John McVie, Jeremy Spencer, and Danny Kirwan (plus McVie's wife, Christine, not yet officially part of the group) started broadening the band's use of blues into other contexts, and adding new influences in the absence of Green's laser-like focus. Jeremy Spencer's fascination with American rock & roll manifests itself on the album opener, "This Is the Rock" (which crosses paths with Elvis Presley's Sun Records sides), whilst "Hi Ho Silver" is a higher-wattage shouter covering the same territory that Spencer explored with the band (sans Green) on "Someone's Gonna Get Their Head Kicked in Tonight," only with a little more subtlety and grace; and his tribute to Buddy Holly, "Buddy's Song," even outdoes the classic Joe Meek/Mike Berry "Tribute to Buddy Holly" as a memorial to the late rock & roll star -- and it was always too good and sincere to be mistaken for part of any oldies revival. "Jewel Eyed Judy" and "Earl Gray" are two superb showcases for Danny Kirwan, the former as a vocalist and player and the latter as a composer and guitarist in tandem with Spencer, in what was a pretty good successor to the Green-era instrumental hit "Albatross." "One Together" shows off a harmony-vocal side to this band that was something new in 1970, on one of the prettiest tunes they ever had to work with. And Kirwan gets the spotlight once again as a guitarist on the hard-rocking "Tell Me All the Things You Do." The album ends with the lyrical, relaxed McCartney-esque folky pop of "Mission Bell," which seemed to point the way toward their future direction. None of this may be as intense as the music they cut with Peter Green running the show, but in its relaxed way Kiln House represents the same virtuoso blues-rock outfit having a little fun while making a record -- think of it as roughly Fleetwood Mac's equivalent to the Rolling Stones' Between the Buttons.“ (Bruce Eder, AMG)
Jeremy Spencer, guitar, vocals, piano, lead vocals on "This is the Rock", "Blood on the Floor", "Hi Ho Silver", "Buddy's Song", "One Together" and "Mission Bell"
Danny Kirwan, guitar, vocals, lead vocals on "Station Man", "Jewel-Eyed Judy" and "Tell Me All the Things You Do"
John McVie, bass
Mick Fleetwood, drums, percussion
Additional musicians:
Christine McVie, backing vocals, keyboards
Recorded June–July 1970 at De Lane Lea Studios, London
Produced by Fleetwood Mac
Digitally remastered
Please Note: We offer this album in its native sampling rate of 44.1 kHz, 24-bit. The provided 192 kHz version was up-sampled and offers no audible value!