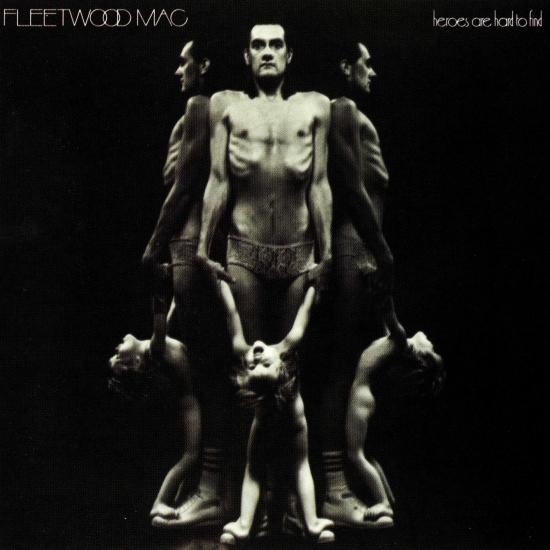 Info for Heroes Are Hard To Find (Remastered)

When Fleetwood Mac cut 1974's „Heroes Are Hard To Find“, the band had been winnowed down to a quartet. American singer-songwriter Bob Welch rounded out the British trio of John McVie, Mick Fleetwood and Christine McVie. Having just won a court battle with an old manager to keep the rights to the band's name, the Mac recorded eleven songs that took them far beyond their blues roots. Welch and Christine McVie split all the songwriting and the result was a record populated by murky songs (Welch's "Angel," and "Bermuda Triangle") with occasional shards of wry optimism shining through (the title track and "Come A Little Bit Closer," both penned by McVie).
McVie and Welch occasionally swapped places. Welch gives his normally drawling vocals a brighter, Beach Boyish tone on "She's Changing Me" and Christine McVie takes the mike for the sinister rumblings of "Bad Loser." „Heroes Are Hard To Find“ was Welch's last album with Fleetwood Mac, and the brooding style of singing and composing that he brought to the group helped redefine its sound, paving the way for Lindsey Buckingham and Stevie Nicks, who joined the Mac on their next album.
„Although this was Bob Welch's last album with the band he had worked with since 1971, it sounds like he's at his peak. Pared down to a foursome for the first and (as of 2002) only time since the addition of Danny Kirwan, both Welch and Christine McVie contribute some of their finest songs. Bolstered by sympathetic self-production and imaginative, often aggressive arrangements that include brassy horns on the title track (a blatant but failed attempt at a hit single), the album is one of their most cohesive yet diverse. Welch continues his fascination with UFOs in a sort of follow-up to Mystery to Me's "Hypnotized" called "Bermuda Triangle" and even heads into a spacy Hendrix "Third Stone From the Sun" groove on "Coming Home." Christine McVie is in wonderful voice on her own ballads like "Prove Your Love" but outdoes herself on the magnificent "Come a Little Bit Closer," a stunning track whose grandeur is heightened by strings and McVie's majestic piano. It's a hidden classic and pedal steel by the Flying Burrito Brothers' Sneaky Pete Kleinow is an unexpected and perfect addition to the album's most fully realized tune. Welch's folk-pop "She's Changing Me" is one of his most upbeat, memorable melodies, offset by the rocker "Silver Heels" and his closing "Safe Harbor," a knowing nod back to Peter Green's atmospheric work on "Albatross" and his contributions to Then Play On. McVie's haunting rocker "Bad Loser" is reinforced by the propulsive rhythm section of Mick Fleetwood and John McVie, both adding tense bite to even the most tender of ballads. Welch left soon after the album's release, and the group went on to bigger and better things, but Heroes is a minor gem that retains its effortless pop charms and contains some buried jewels in the extensive Fleetwood Mac catalog.“ (Hal Horowitz, AMG)
Bob Welch, vocals, guitar, vibraphone
Christine McVie, vocals, keyboards, Arp string synthesizer
John McVie, bass
Mick Fleetwood, drums, percussion
Additional musicians:
Pete Kleinow, pedal steel guitar
Recorded July 1974 at Angel City Sound, Los Angeles, California
Engineered by Bob Hughes
Produced by Fleetwood Mac, Bob Hughes
Digitally remastered