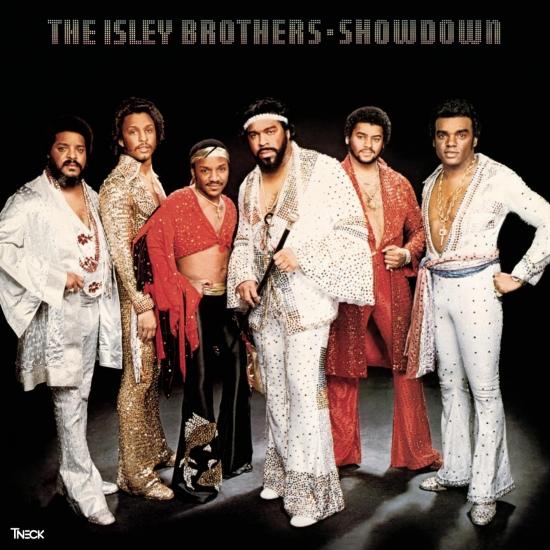 The Isley Brothers' 1978 album, „Showdown“, may have arrived towards the end of their initial (extremely long) run of hits, but it still finds them at the top of their game. "Take Me to the Next Phase" is one of the funkiest things they've ever done, with slap-happy bass and growling bass synth adding up to a ferocious bottom, while on the other side of the spectrum, "Groove With You" sports a smooth, tender sound that could rival any contemporaneous track by Smokey Robinson. „Showdown“ also wound up being sample fodder for many hip-hop artists years later.
„The Isley Brothers' 3 + 3 lineup only lasted about ten years, which isn't that long when you consider that the group was formed in 1954 (19 years before the 3 + 3 lineup was unveiled) and was still touring in the late '90s. By 1980, you were hearing more and more complaints about how formulaic the 3 + 3 lineup had become, but when Showdown came out in 1978, the lineup hadn't lost any of its freshness. Showdown, in fact, is generally excellent. The Isleys bring a great deal of passion to funk/rock scorchers like "Rockin' With Fire," "Love Fever," and the number one hit "Take Me to the Next Phase," and they are equally appealing on the smooth, caressing slow jam "Groove With You" (another major hit). Meanwhile, the slow-burning "Ain't Givin' Up No Love" is one of the most bluesy things that the 3 + 3 sextet recorded. 1977's Go for Your Guns, the album that preceded Showdown, was an incredibly tough act to follow. But even if Showdown isn't quite in a class with that treasure, it comes impressively close.“ (Alex Henderson, AMG)
Ronald Isley, lead and background vocals
O'Kelly Isley, Jr., background vocals
Rudolph Isley, background vocals
Chris Jasper, piano, keyboards, ARP synthesizers, Clavinet, tambourine, percussion
Marvin Isley, bass, woodblock, cowbell, percussion
Ernie Isley, guitar, drums, percussion, congas, timbales, maracas
Recorded 1978 at Bearsville Studios, Bearsville, New York
Engineered by John Holbrook, Thomas Mark
Produced by The Isley Brothers
Digitally remastered