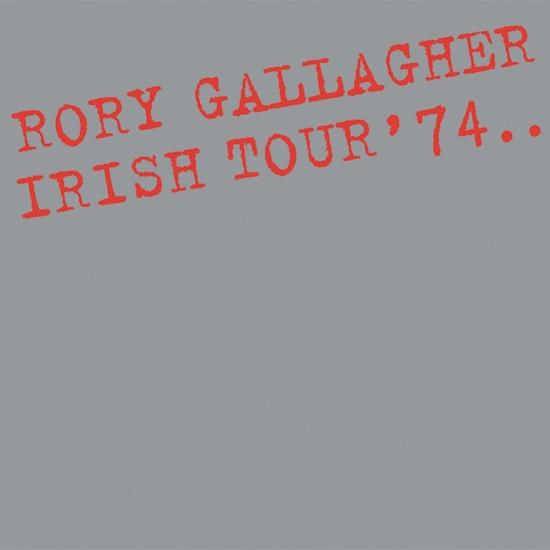 Irish Tour '74 is the sixth album by Rory Gallagher. It is a live album compiled from performances during Gallagher's Irish Tour in January 1974. The source concerts were recorded at Belfast Ulster Hall, Dublin Carlton Cinema and Cork City Hall using Ronnie Lane's Mobile Studio. "Back on My Stompin' Ground (After Hours)" was recorded from a jam session during the tour. Irish Tour '74 has sold in excess of two million copies worldwide. An article in a Belfast daily newspaper stated: "Rory Gallagher never forgot Northern Ireland, he returned throughout the '70s when few other artists of his calibre dared come near the place."
“Considered by blues rock guitarist, Joe Bonamassa, to be one of the most influential live albums of all time, “Irish Tour '74” was recorded at Belfast Ulster Hall, Dublin Carlton Cinema and Cork City Hall during the height of ‘The Troubles’. Released 21st July 1974. Irish Tour '74 has sold in excess of two million copies worldwide. Classic Rock Magazine hailed it as “easily among the best 10 live albums in the history of rock.” This 2012 remaster used the original vinyl artwork and 1/4" tapes so that they look and sound exactly as Rory intended. The reissue CD liner notes capture the excitement of the Belfast concert; "Two thousand people were overjoyed as Gallagher - a native of Cork, Southern Ireland - took to the Ulster Hall just 24 hours after the city had witnessed its biggest bomb blast during a night of at least 10 explosions."
Gallagher never enjoyed going into the studio to make records. Playing to a live audience was essential, he thought, to get the real energy needed for the kind of music he wanted to play. The members of his band felt the same way. Speaking about the Irish tour album keyboardist Lou Martin said "Albums were always done in a rush because we were on the road so much, and then we’d come back to London and it could be two weeks – like Blueprint was done in two weeks – and that is ridiculous,... but Irish Tour was an absolute highlight,... the band came to fruition in the Calling Card days, by that time we were well seasoned … everybody knew everybody else’s style of playing... The studio was not the best environment for recording. He wasn’t at his most comfortable or happiest, I mean a lot of people really adapted to it really well like The Allman Brothers or Little Feat. With Rory, if he didn’t have somebody to look at then he couldn’t feed off the energy. That’s why Irish Tour is such a good bloody album because it was recorded live, he got the crowd there with him singing along and sort of like urging him along… without the presence of an audience the recording process for Rory was a bit of a strain"
Gallagher's 1974 tour of Ireland coincided with one of the most tumultuous times in Belfast. Violence from IRA was erupting throughout the city even at rock concerts. As a result, most rock acts refused to play in the city.[5] The day before Gallagher's scheduled concert in Belfast ten bombs went off at various locations around the city. Everyone expected Gallagher to cancel as all the other big names had but he went on with the concert and was rewarded with one of his best shows. A local Belfast journalist writing to describe the concert and the feeling said:
I've never seen anything quite so wonderful, so stirring, so uplifting, so joyous as when Gallagher and the band walked on stage. The whole place erupted, they all stood and they cheered and they yelled, and screamed, and they put their arms up, and they embraced. Then as one unit they put their arms into the air and gave peace signs. Without being silly, or overemotional, it was one of the most memorable moments of my life. It all meant something, it meant more than just rock n' roll, it was something bigger, something more valid than just that.
"The companion piece to director Tony Palmer's documentary of the same name, Irish Tour was recorded in January 1974 in Belfast, Dublin, and Cork at a time when precious few performers -- Irish or otherwise -- were even dreaming of touring the trouble-torn island. Northern Ireland, in particular, was a rock & roll no-go area, but Gallagher never turned his back on the province and was rewarded with what history recalls as some of his best-ever gigs. Irish Tour, in turn, captures some of his finest known live recordings and, while it's impossible to tell which songs were recorded where, across nine in-concert recordings (plus one after-hours jam session, "Back on My Stompin' Ground"), the energy crackling from stage to stalls and back again packs an intensity that few live albums -- Gallagher's others among them -- can match. Highlights of a stunning set include dramatic takes on Muddy Waters' "I Wonder Who" and Tony Joe White's "As the Crow Flies," a raw acoustic rendering that is nevertheless totally electrifying. A frustratingly brief snip of the classic Shadows-style "Maritime" (aka "Just a Little Bit") plays the album out in anthemic style and then, of course, there's "Walk on Hot Coals," a marathon excursion that posterity has decreed Gallagher's most popular and accomplished statement -- a status that Irish Tour does nothing to contradict. It's foolish playing favorites, however. Even more than Gallagher's earlier Live in Europe album from 1972, Irish Tour confirms Gallagher not simply as the greatest bluesman Ireland ever knew, but as one of the island's greatest-ever performers." (Dave Thompson, AMG)
Rory Gallagher, vocals, guitar, harmonica
Gerry McAvoy, bass
Lou Martin, RMI Electra piano
Rod de'Ath, drums
Digitally remastered