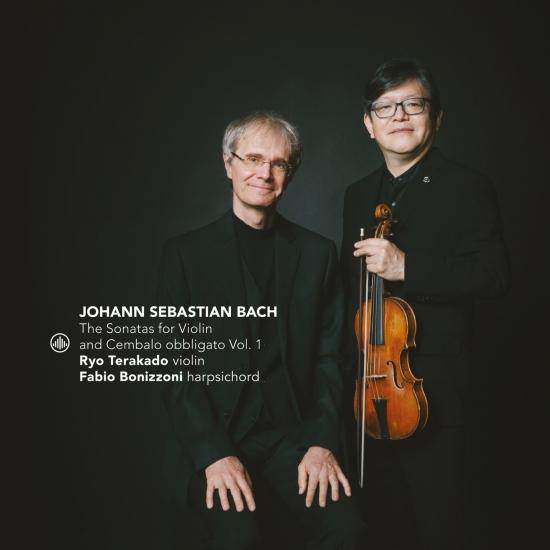 Info for Johann Sebastian Bach: The Sonatas for Violin and Cembalo Obbligato Vol. 1

A superb account of J.S. Bach's Sonatas for violin and harpsichord obbligato by Ryo Terakado and Fabio Bonizzoni.
Johann Sebastian Bach developed a new style, cembalo obbligato, where the right hand of the keyboard plays as a melody instrument and is given the same importance as the violin, flute or other solo instrument. His sonatas for melody instrument and keyboard instrument include works for flute, violin, and viola da gamba. It seems that the obbligato style interested him more than the traditional continuo role for the keyboard. As for the violin, there are two sonatas written with basso continuo and six with harpsichord obbligato. Among these works, the six sonatas in particular were conceived as a set, with a consistent style and a well-considered key distribution. This set is one of the highlights in the catalogue of Bach's chamber music. Bach's son Carl Philippe Emmanuel Bach writes to Bach's first biographer, Johann Nikolaus Forkel, in 1774: "The 6 clavier [and violin] trios...are amongst the best works of my dearly beloved father. Even now they sound very good and give me many delights, regardless of the fact that they are over fifty years old."
The key distribution is somewhat symmetric and this suggests that Bach intended these as a set of pieces for violin, comparable to his unaccompanied sonatas and partitas for violin. Additionally, with the exception of Sonata No. 6, this set of works all follow the church sonata style.
Ryo Terakado: My first performance with Fabio was in 2019. We had been colleagues at the Royal Conservatoire in The Hague for a long time, but we had never actually performed together in concert. We discovered immediately that we shared a common musical language and approached our music similarly, and the collaboration was tremendously successful and rewarding. We now feel that our ensemble as a duo is sufficiently mature that it is our pleasure to present to you these fruits of our collaboration. Bach is a delight in our life.
Ryo Terakado, violin
Fabio Bonizzoni, harpsichord 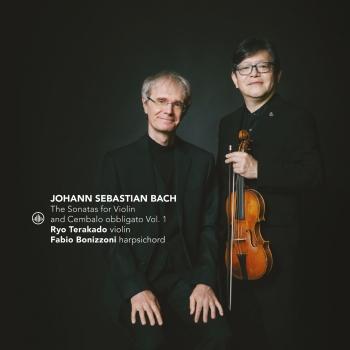 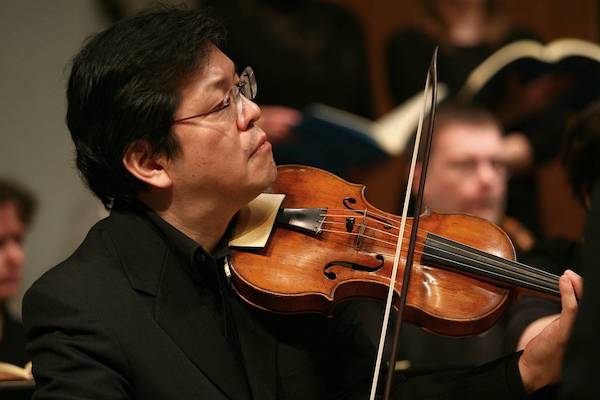 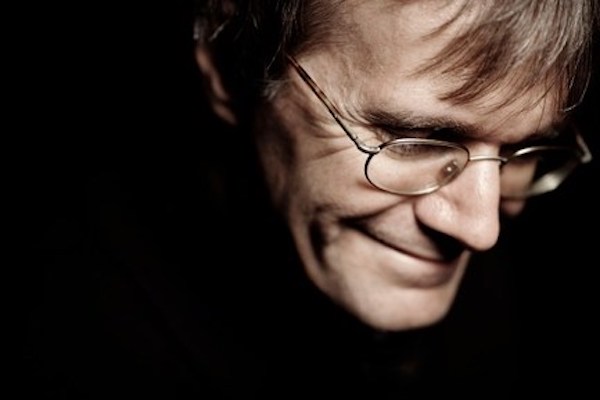 Ryo Terakado
The Bolivian-born Japanese violinist and conductor, Ryo Terakado, started to play violin at the age of 4. He won the 2nd prize in the All Japan Youth Musical Competition when he was 14 years old. He studied violin, chamber music and conducting at the Toho Gakuen School of Music. In 1983, he won the 3rd prize in the All Japan Music Competition. At the time when graduating at the Toho Gakuen, he was invited as a concertmaster of The Tokyo Philharmonic Orchestra, where he served for 2 years.
Ryo Terakado’s interest in Baroque music already started before: When he was 19, he started to play Baroque violin by himself. Some years later, he founded a Baroque ensemble Concert Spirituel together with Masahiro Arita (flute) and Hidemi Suzuki (cello). In 1985, he came to the Netherlands to study the Baroque violin at the Royal Conservatoire in The Hague under guidance of Sigiswald Kuijken.
Since 1987, Ryo Terakado played with many Baroque orchestras in Europe and Japan as a concertmaster: Les Arts Florissants, La Chapelle Royale, Collegium Vocale Gent, Tokyo Bach Mozart Orchestra etc. Presently he is the concertmaster of La Petite Bande and Bach Collegium Japan. He plays regularly concertos by i.e. J.S. Bach, Antonio Vivaldi, W.A. Mozart with the above-mentioned orchestras.
Fabio Bonizzoni
one of the leading Italian harpsichordists and organists of his generation, graduated in organ, organ composition and harpsichord at the Royal Conservatorium in The Hague in Ton Koopman’s class.
After having played for several years with some of the most important orchestras specializing in early music (Amsterdam Baroque, Le Concert des Nations, Europa Galante), from 2004 he exclusively devotes himself to his activities as soloist and director, in particular of his own orchestra “La Risonanza”.
Furthermore, he is harpsichord professor at the Royal Conservatory of The Hague (Holland) and in Italy at the Conservatory of Novara; he is founder and president of the “Associazione Hendel”, a society devoted to the studies of Handel’s music in Italy.
As a soloist he has been recording for many years for the Spanish label Glossa. His discography includes works by Claudio Merulo, Giovanni Salvatore, Giovanni Picchi, Francesco Geminiani, Bernardo Storace, Domenico Scarlatti and Johann Sebastian Bach (Goldberg Variations and the Art of Fugue). His last release as a soloist is devoted to the two books of toccatas by Girolamo Frescobaldi.
In 2010 he has completed with La Risonanza the project of recording the complete Italian Cantatas with instruments by G.F. Handel: this project has been defined by Gramophone magazine the most important of the decade, and 3 of the 7 CDs have been awarded the prestigious Handel Stanley Sadie Prize. The last disc issued, « Apollo e Dafne », is winner of a Gramphone Award in 2011.
His activity is also enriched by some commitments as guest conductor; in particular in April 2011 he conducted the orchestra of Teatro alla Scala in Milano in the new ballet “L’altro Casanova”.

Booklet for Johann Sebastian Bach: The Sonatas for Violin and Cembalo Obbligato Vol. 1