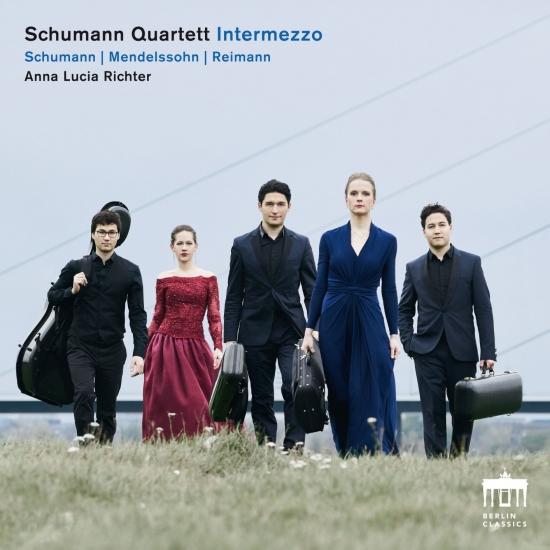 Their point of departure and focus is his String Quartet no. 1 in A minor. Robert Schumann always had difficulty with this particular genre, and in 1842 he brought his "attempts at writing quartets" to an end in a headlong burst of creativity that produced his opus 41, comprising three quartets. The Schumann Quartet musicians concentrate unconditionally on the vocal part-writing, and rather than merely overcoming the technical challenges choose to simply ignore them. The music of Felix Mendelssohn is suffused with what Schumann envied as "ease" or "facility".
The String Quartet no. 1 in E flat major was written in the late summer of 1829, when the younger composer was not yet 20. The correlations, corresponding references and tributes are all in evidence – Mendelssohn's string quartet is the perfect match for Schumann's equivalent work. There is a kind of cross-fertilization between the attention to detail and fresh approach taken by the Schumann Quartet and the modernity of the almost youthful Mendelssohn; the result is encapsulated in the unrestrained joy of music-making in the fourth movement. Schumann and Mendelssohn provide the framework into which Aribert Reimann then sets "his" Schumann. Reimann is one of today's most successful composers and is linked to the composer of the Romantic era born in Zwickau, Saxony, by more than music. He is in fact a direct descendant of the physician who treated Schumann at the psychiatric hospital in Endenich and has therefore had access to the patient file detailing the precarious balance of Schumann’s emotional state. His attitude to Schumann is therefore a reflection of those impressions. The Adagio zum Gedenken an Robert Schumann (adagio to the memory of Robert Schumann) based on two unfinished chorales without words was composed as a result of intensive and personal cooperation between the quartet and Reimann.
In Reimann's arrangement of the 6 Gesänge op. 109, the ensemble succeeds, in harmony with the soprano Anna Lucia Richter, in fulfilling Schumann’s wish for an "additional, fully-formed accompanying instrument". Reimann's skill in handling the original brings out the fine features and nuances of the lyrics. The quartet and singer complement each other so effortlessly that the unusual combination sounds like a quintet that has been working together for many years.
Schumann Quartett
Anna Lucia Richter, soprano 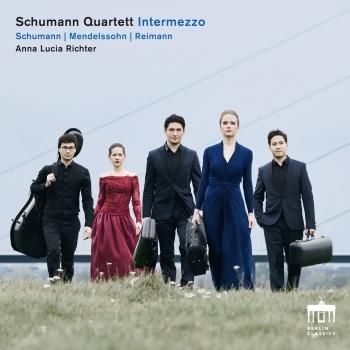 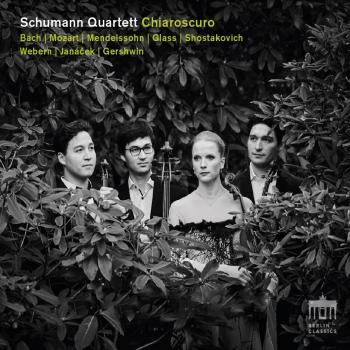 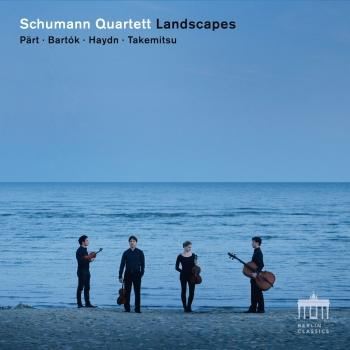