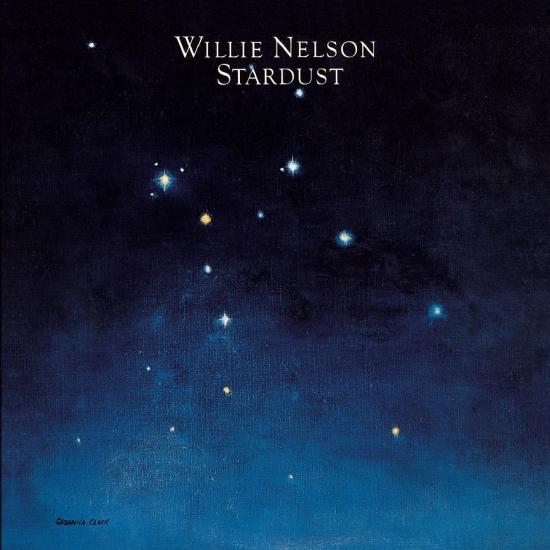 15 years before Tony Bennett made the Great American Songbook safe for the MTV generation, there was Willie Nelson's „Stardust“, one of the greatest 'crossover' albums in history. The concept was simple: Willie singing a select group of familiar standards by composers such as Carmichael, Berlin, Weill, Ellington, the Gershwins, all in his familiar and inimitable style. Yet the result is not a quite a country treatment of these tunes. For one thing, the great R&B organist Booker T. Jones produced the session in addition to performing with Nelson's superb band featuring the estimable Mickey Raphael on harmonica. One of the enduring pleasures of STARDUST is the interplay between hushed organ, keening harmonica and Nelson's own stately gut-string guitar as well as his beautifully measured, plaintive singing.
„At the height of outlaw country, Willie Nelson pulled off perhaps the riskiest move of the entire bunch. He set aside originals, country, and folk and recorded Stardust, a collection of pop standards produced by Booker T. Jones. Well, it's not entirely accurate to say that he put away country and folk, since these are highly idiosyncratic interpretations of 'Georgia on My Mind,' 'All of Me,' 'Moonlight in Vermont,' and 'Don't Get Around Much Anymore,' blending pop, country, jazz, and folk in equal measures. It's not that Willie makes these songs his own, it's that he reimagines these songs in a way that nobody else could, and with his trusty touring band, he makes these versions indelible. It may be strange to think that this album, containing no originals from one of America's greatest songwriters, is what made him a star, and it continues to be one of his most beloved records, but it's appropriate, actually. Stardust showcases Nelson's skills as a musician and his entire aesthetic -- where there is nothing separating classic American musical forms, it can all be played together -- perhaps better than any other album, which is why it was a sensation upon its release and grows stronger with each passing year.“ (Stephen Thomas Erlewine, AMG)
Willie Nelson, vocals, guitar
Bobbie Nelson, piano
Paul English, drums
Rex Ludwick, drums
Jody Payne, guitar
Bee Spears, bass
Chris Ethridge, bass
Mickey Raphael, harmonica
Booker T. Jones, organ, piano
Recorded December 3–12, 1977
Engineered by Donivan Cowart, Bradley Hartman
Produced by Booker T. Jones
Digitally remastered