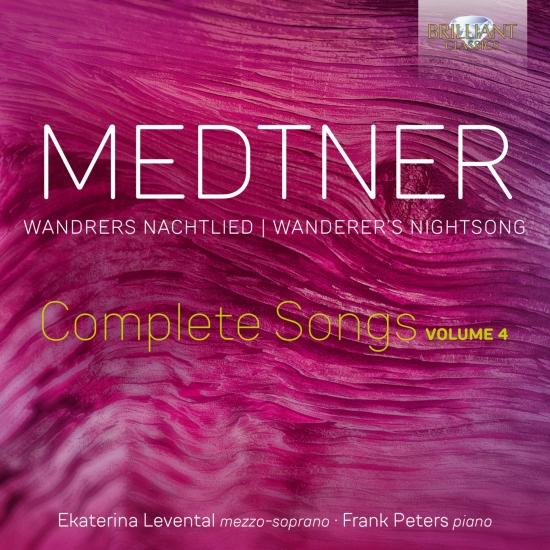 New recordings of Goethe and Heine settings by a master Russian song-writer, by performers thoroughly versed in the composer’s complex harmony and heritage.
While Nikolai Medtner only emigrated from Moscow to Berlin in 1921, eventually settling in London, the Russian composer traced a deep connection to German culture through the ancestry of his mother. He was familiar with the German language and culture from his childhood, and made his first visit to Berlin in the winter of 1904-5, then returned for most of 1907 and the summer of 1909.
It can be no coincidence that these original-language settings of two of Germany’s greatest poets date from this period in Medtner’s life. In his mid-20s at this point, Medtner had become internationally known as a pianist of formidable technical and interpretative gifts, but he continued to compose and to teach, taking up a post at the Moscow Conservatoire in 1909.
While Medtner’s pianism often lends the quicker songs a scintillating brilliance, such as the Elfenliedchen which is third in the Opus 6 collection of Goethe’s songs, the overall mood of the collection is imbued with the feelings of love and longing which are key-signatures of Romanticism (German or Russian). Medtner was always drawn towards musical contemplation of life’s deeper themes, and he accordingly sets both poets at their most philosophical and visionary, in the Wandrers Nachtlied of Goethe and the Bergstimme of Heine.
On this album, recorded in 2022, Ekaterina Levental and Frank Peters couple the Opp 6, 15 and 18 settings of Goethe with the three Op 12 settings of Heine: a unique but natural pairing on record. The booklet includes both original texts and English translations.
The 4th volume of this exciting new series, the recording of the complete songs by Medtner, bears the title Wandrers Nachtlied, referring to the dark and eternally longing character of some of the songs presented.
Nikolai Medtner was born in Moscow in 1880. After piano lessons with his mother he entered the Moscow Conservatory where he had lessons from Pavel Pabst and Sergey Taneyev. He won the prestigious Anton Rubinstein Prize at age 20. A younger contemporary of Scriabin and Rachmaninoff he was destined for a brilliant pianistic career but he chose to concentrate on composition. In 1936 he settled in London where he spent the rest of his life teaching and composing till 1951.
Medtner’s style is rooted in the 19th century, full-blooded romantic, with a highly personal harmonic and melodic language, often complex and dense, but hauntingly beautiful.
Ekaterina Levental was born in Uzbekistan. She settled in The Netherlands where she studied at the Conservatory of The Hague. She embarked on a successful career as singer, dramatist and theatre producer. Pianist Frank Peters is a highly respected Dutch pianist, both as soloist and chamber music partner. He is an indefatigable champion of the piano works of Medtner.
‘Levental’s soft high notes are truly exquisite, and she can do things with the voice that most modern singers cannot, such as to drain the voice of vibrato for expressive effect. All things considered, she is a virtuoso vocalist of the old school, and such artists are extremely rare nowadays… “We are very lucky to have a pianist like Peters, who fully understands this dichotomy, as the pianist on this album.” (Artmusiclounge.com). “Levental has a dark, rich voice, but her pure tone is never burdened by excess vibrato… She couldn’t ask for a more responsive partner than Peters, who reveals an astonishingly deft touch and an uncanny ear for detail.” Fanfare (Volume 1, 96056). “The phrasing is so perfect, the sense of line so keen, the rubato so natural sounding, that this seems the only way to sing them… this lucidity is due to the purity of Levental’s voice, which she employs with sure intonation and minimum vibrato, as well with an exquisite (but always controlled) play of colour… This is a major release.” Fanfare (Volume 2, 96061).
Ekaterina Levental, mezzo-soprano
Frank Peters, piano 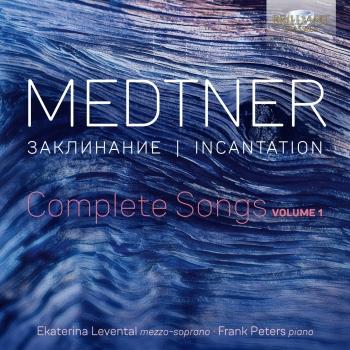 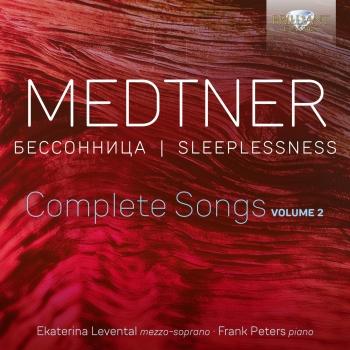 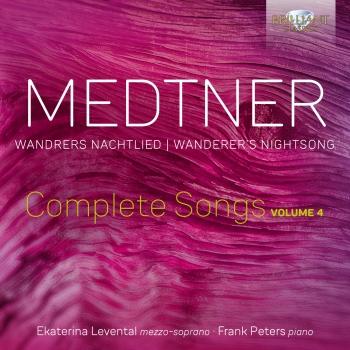 Ekaterina Levental
was born in Tashkent, the capital city of Uzbekistan, one of the republics of the former Soviet Union. Ekaterina moved to Holland in 1993 where she continued her studies on the harp at the Conservatories in Enschede, Rotterdam and Detmold (Germany) with teachers Alex Bonnet, Godelieve Schrama and Catherine Michel. Due to a scholarship granted her by the Prins Bernhard Cultuurfonds and the Fonds voor Podium- en Amateurkunsten she continued her studies with Germaine Lorenzini in Lyon (France). After graduating for her harp studies she followed her passion for singing and started a new study Classical Singing at the Royal Conservatory in The Hague. Ekaterina finished both studies Cum Laude. She studied singing with Rita Dams, Meinard Kraak, Barbara Pearson and Diane Forlano and followed workshops and master classes with Nelly Miricioiu, Jean Piland, Charlotte Margiono, Christoph Prégardien, Jard van Nes, Jean Philippe Lafont and Leontina Vaduva.
At this moment Ekaterina makes a career as an opera singer and theater performer. She worked as a soloist with companies as De Nationale Opera, Jan Fabre/Troubleyn (Belgium), LOD Gent (Belgium), Toneelhuis Antwerpen (Belgium), Muziektheater Hollands Diep Dordrecht, Opera Trionfo, Veenfabriek Leiden, Opera Spanga, Opera Nijetrijne, Holland Opera, Silbersee, LeineRoebana, Opera de Calais, Diamantfabriek and others.
Together with the harpist Eva Tebbe Ekaterina forms a successful duo called “Duo Bilitis”. The duo is the winner of several international prizes, performed during numerous chamber music series and music festivals in Holland and abroad and released their CD’s at the label Brilliant Classics/Foreign Media. A new CD ‘Rêveries de Bilitis’ based on work by Claude Debussy is released with big success in 2018.
Together with Chris Koolmees Ekaterina forms LEKS Compagnie and develops music theater projects as Pierrot Lunaire 2.0, La Voix Humaine FaceTime and the autobiographical trilogy The Path (De Weg) – The Border (De Grens) – Pique Dame (Schoppenvrouw).
Her recent engagements were amongst others the main role in the Opera Turan Dokht at Holland Festival (World Opera LAB), the role of Goneril in de the opera King Lear (Holland Opera) and the role of ‘Die Frau’ in the Opera ‘Menuet’ (LOD Gent).