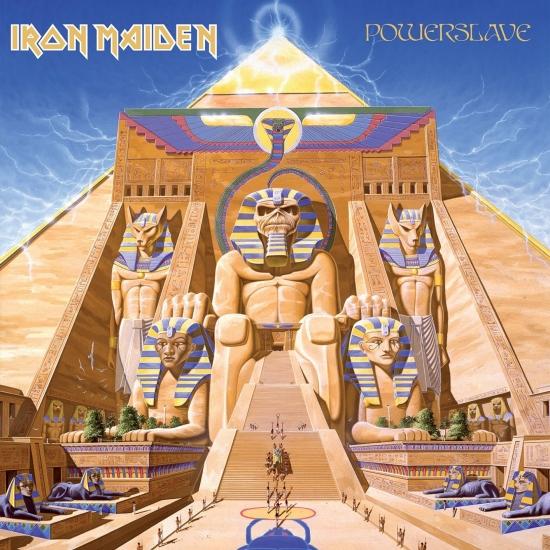 Iron Maiden issued its fifth release, „Powerslave“, in 1984. It was a time in which the band had become a worldwide arena-headlining sensation. The album was also the first to not have been marked by a lineup change, helping Maiden produce another metal classic.
While most other metal bands of the era were still singing about partying, Maiden continued to tackle some serious, thought-provoking subject matter. The band addresses the threat of nuclear war on '2 Minutes to Midnight,' World War II-era fighter pilots in the album-opening 'Aces High,' and the demise of an Egyptian king in the title track. But the true highlight is the long and winding 13-and-a-half-minute epic 'Rime of the Ancient Mariner,' a track that does a great job of recreating the haunting imagery of the Samuel Taylor Coleridge tale. Once „Powerslave“ was released, Maiden undertook one of the longest rock tours in history, playing from August 1984 through July 1985.
„The third in a trilogy of legendary Iron Maiden albums, Powerslave is frequently ranked as the fan favorite of the bunch, capping off a stellar run that sealed the band's genre-defining status. If The Number of the Beast was the all-time metal landmark, Powerslave is perhaps the quintessential Maiden album, capturing all the signature elements of the band's definitive era in one place. The album opens with Maiden at their catchiest, turning in a pair of metal classics right off the bat with the British hit singles 'Aces High' (a high-speed ode to a WWII air battle) and the apocalyptic '2 Minutes to Midnight.' Next we get an instrumental, 'Losfer Words (Big 'Orra),' of the sort that Maiden periodically deployed to keep fans in awe of their technical chops. A pair of their best and most overlooked album tracks follows; 'Flash of the Blade' and 'The Duellists' exemplify the glory-minded battle hymns that made up such an important part of their lyrical obsessions, even if both are about sword fighting rather than modern military history. By the end of the album, we're seeing Maiden at their most progressive and ambitious. The seven-minute title track builds on the previous album's 'To Tame a Land' with its use of Middle Eastern melodies, delving into Egyptian mythology for a rumination on power and mortality. This leads into the biggest, most grandiose epic in the Maiden catalog -- 'Rime of the Ancient Mariner,' a multi-sectioned, thirteen-and-a-minute prog-fest adapted from the Samuel Taylor Coleridge poem. Though it isn't exactly what you'd call hooky, its shifting moods and lofty intellectual aspirations made it a live favorite. This latter material helped ensure that Powerslave was the Maiden album with the biggest impact on the emerging progressive metal genre (which, in its earliest form, essentially fused Rush with this sort of Maiden material). In this context, 'Back in the Village' gets somewhat lost in the shuffle; it's a thematic sequel to 'The Prisoner,' though not quite as memorable. So even though we don't hear the punk influences of old, Powerslave catalogs every major facet of the band's personality during the Dickinson years, and does so while firing on all cylinders. Perhaps that's in part because Powerslave is the first Maiden album to feature the same lineup as its predecessor, creating a definite continuity and comfort level. Or perhaps it's simply that we're witnessing a great band in its creative prime. Whatever the case, it's entirely arguable that Powerslave summarizes why Iron Maiden was so important and influential even more effectively than The Number of the Beast, at least on a purely musical level. It may not be quite as accessible, but it's every bit as classic and essential.“ (Steve Huey, AMG)
Bruce Dickinson, vocals
Dave Murray, guitar
Adrian Smith, guitar
Steve Harris, bass
Nicko McBrain, drums

The Book of Souls

The Book Of Souls: Live Chapter

Iron Maiden
was formed in the year 1976 by bassist Steve Harris. They released their first album in 1980 as a five piece band with Paul Di’Anno on vocals. Later, Bruce Dickinson replaced him in 1981. With several line-up changes Steve Harris would remain the only original member never to have had a hiatus. When Bruce Dickinson quit in 1994 and was replaced by Wolfsbane’s Blaze Bayley, the band lost a lot of their fanbase. They recorded two albums with Blaze before Bruce Dickinson and Adrian Smith returned to the fold for 2000’s “Brave New World”, and 2003’s “Dance of Death”, making them a six-piece. As of 1999 the line-up hasn’t changed. Here’s the biography of this popular band.
Known for such powerful hits as “Two Minutes to Midnight” and “The Trooper,” Iron Maiden were and are one of the most influential bands of the heavy metal genre. The often-imitated band has existed for over nearly four decades, pumping out wild rock similar to Judas Priest. Iron Maiden have always been an underground attraction; although failing to ever obtain any real media attention in the U.S. (critics claimed them to be Satanists due to their dark musical themes and their use of grim mascot “Eddie”), they still became well-known throughout the world and have remained consistently popular throughout their career. Iron Maiden were one of the first groups to be classified as “British metal,” and, along with Black Sabbath, Led Zeppelin, and a host of other bands, set the rock scene for the ’80s.
Band Members:
Vocals:
Paul Mario Day (1975-1976)
Dennis Wilcock (1976-1977)
Paul Di’Anno (1978-1981)
Blaze Bayley (1994-1998)
Bruce Dickinson (1981-1993 and 1999-present)
Drums:
Barry “Thunderstick” Purkis (1977)
Doug Sampson (1977-1979)
Clive Burr (1980-1982)
Nicko McBrain (1982-present)
Guitar:
Dave Murray (2) (1976-present)
Dennis Stratton (1979-1980)
Adrian Smith (2) (1980-1990 and 1999-present)
Janick Gers (1990-present)
Bass:
Steve Harris (1975-present)
Keyboards:
Michael Kenny (1986-present) (Live performances only, not a full member)