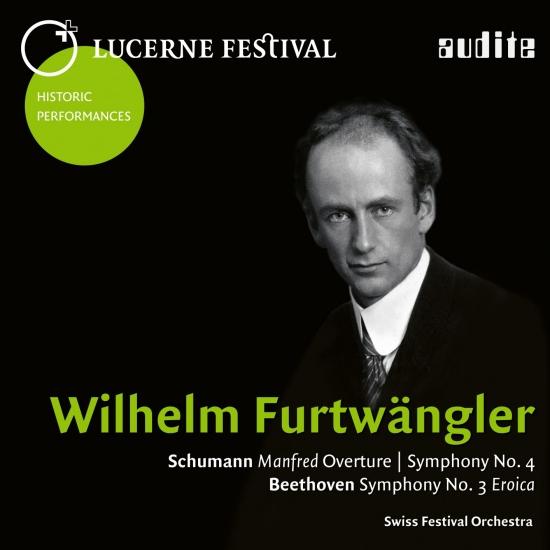 Furtwängler: Lost Manfred Overture now released for the very first time. Volume 12 of the LUCERNE FESTIVAL editionpresents a sensational archive discovery: a live recording of the Manfred Overture from the 1953 festival, until recently presumed lost, and now released for the very first time. In 1953, Furtwängler also conducted two of his all-time favourites, Beethoven's Eroica and Schumann's Fourth Symphonies. Until now, these exciting interpretations were only available in technically flawed recordings made by enthusiasts. For this edition, the newly rediscovered original tapes from the archives of the SRF Swiss Radio and Television were made available.
Wilhelm Furtwängler, invited to Lucerne for the first time in 1944, was one of the defining artists of the LUCERNE FESTIVAL's first decades. From 1947, he performed in Lucerne each summer (with the exception of 1952, when he had to cancel due to illness) until his final concert in August 1954, a few months before his death (recording also available in the "Historic Performances" series: audite 95.641). In total, Furtwängler conducted eighteen of the festival's concerts, sixteen of which with the Swiss Festival Orchestra who also played on 26 August 1953.
Furtwängler's motto was to be "faithful to the spirit" rather than "faithful to each note". This Lucerne recording demonstrates his methodical approach, especially by means of a precisely calculated tempo architecture: Furtwängler's seemingly arbitrary tempo modifications hold structural significance, dynamising the musical form. Illustrated with numerous photos from the festival's archive, the 32-page booklet in three languages discusses this approach, whilst also referring to other famous recordings, such as Furtwängler's studio recording of Schumann's Fourth Symphony with the Berlin Philharmonic, made only a few months earlier.
In cooperation with audite, LUCERNE FESTIVAL presents outstanding concert recordings of artists who have shaped the festival throughout its history. The aim of this CD edition is to rediscover treasures - most of which have not been released previously - from the first six decades of the festival, which was founded in 1938 with a special gala concert conducted by Arturo Toscanini.These recordings have been made available by the archives of SRF Swiss Radio and Television, which has broadcast the Lucerne concerts from the outset. Carefully re-mastered and supplemented with photos and materials from the LUCERNE FESTIVAL archive, they represent a sonic history of the festival.
Schweizerisches Festspielorchester
Wilhelm Furtwängler, conductor 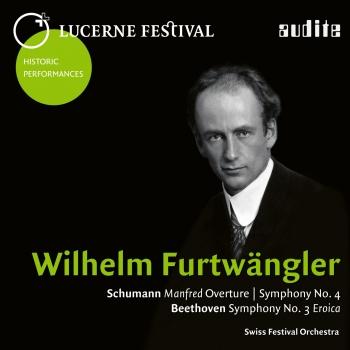 Wilhelm Furtwängler
was born in Berlin, in 1886, into a prominent family. His father Adolf was an archaeologist, his mother a painter and his brother, Philipp, a mathematician. Most of his childhood was spent in Munich, where his father taught at the university. He was given a musical education from an early age and developed an early love of Beethoven, a composer he remained closely associated with throughout his life.
By the time of Furtwängler's conducting debut at the age of twenty, he had written several pieces of music. However, they were not well received and that, combined with the financial insecurity that a career as a composer would provide, led him to concentrate on conducting. At his first concert he led the Kaim Orchestra (now the Munich Philharmonic) in Anton Bruckner's Ninth Symphony. He subsequently held posts at Munich, Lübeck, Mannheim, Frankfurt, and Vienna, before securing a job at the Berlin Staatskapelle in 1920 and, in 1922, at the Leipzig Gewandhaus Orchestra (where he succeeded Arthur Nikisch) and concurrently at the prestigious Berlin Philharmonic Orchestra. Later he became music director of the Vienna Philharmonic Orchestra, the Salzburg Festival and the Bayreuth Festival, which was regarded as the greatest post a conductor could hold in Germany at the time.
Towards the end of the war, under extreme pressure from the Nazi Party, Furtwängler fled to Switzerland. He resumed performing and recording following the war and remained a popular conductor in Europe, although he was always under somewhat of a shadow. He died in 1954 in Baden-Baden.
Furtwängler is most famous for his performances of Beethoven, Brahms, Bruckner and Wagner. However, he was also a champion of modern music and gave performances of contemporary composers such as Bartók, Hindemith, Schoenberg, Stravinsky and Bloch.