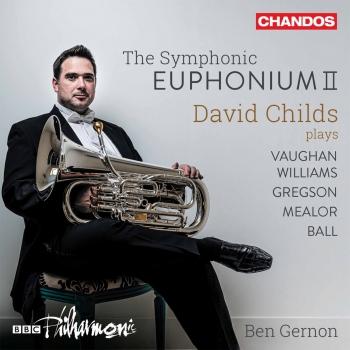 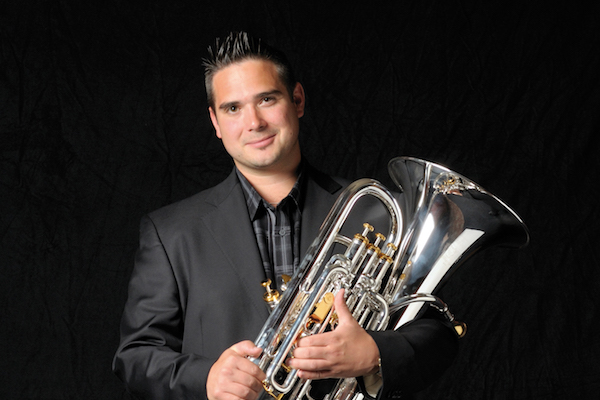 David Childs
King Edward III once said: "If you want to train a longbowman, start with his grandfather." This adage holds just as true for British euphonium soloist David Childs, born in 1981, to a family whose name had been synonymous with brass for the last two generations. His grandfather John was a well-respected euphonium player from the Welsh Valleys who inspired his sons, Robert & Nicholas to take up euphonium. Robert began teaching his son David from an early age and in recent years David has emerged as one of the finest brass soloists of his generation.
In the year 2000 he broke new ground for the euphonium becoming the first euphonium soloist to win the brass final of the televised 'BBC Young Musician of the Year’ which led to David’s highly acclaimed première performance of Philip Wilby’s Concerto for Euphonium with the BBC Philharmonic under Yan Pascal Totelier. In the same year David was awarded the coveted ‘Euphonium Player of the Year’ title, a title he won again in 2004 and still holds today. Since that time David has been instrumental in raising the euphonium’s profile in the classical world of music and has not ceased to wow audiences with his astonishing technique, extrovert musicality and engaging stage presence.
Still in the early stages of his career, David has already toured extensively performing as a soloist in Australia, New Zealand, the Middle East, Japan, Hong Kong, Europe and the U.S.A. He is a keen advocate of new music and has premièred ten concerti for euphonium including a Royal Albert Hall BBC Proms broadcast of Alun Hoddinott's, 'Sunne Rising - The King Will Ride’, a Carnegie Hall US première of Karl Jenkins’ Concerto for Euphonium & Orchestra, and a UK première of Christian Lindberg’s Concerto for Euphonium & Orchestra directed by the composer. He has also been featured in the Classic fm, Gramophone, Classical Music, and MUSO magazines.
David has appeared as soloist with the BBC National Orchestra of Wales, Royal Philharmonic, BBC Concert Orchestra, RTE Concert Orchestra, BBC Philharmonic, Sinfonia Cymru, Welsh Chamber Orchestra and DCINY Symphony; made solo appearances at the Singapore International Festival, Welsh Proms, Harrogate International Festival, Cheltenham Festival, Melbourne International Festival, BBC Proms and New York Festival; performed solo recitals at the Wigmore Hall, Purcell Room and Bridgewater Hall; given Concerto performances at the Concertgebouw, Carnegie Hall, Queen Elizabeth Hall, Symphony Hall, New York’s Lincoln Center and London’s Royal Albert Hall; and regularly records as a solo artist for radio, television and commercial disc.
Having already achieved a great deal as a euphonium soloist David has received many awards in recognition: a Silver Medal from the Worshipful Company of Musicians; a Star Award from the Countess of Munster; the Musicians Benevolent’ Sir Charles Leggett Award; the Welsh Music Guild’s Leo Abse & Cohen Award; the BBC Radio Wales Soloist Award and the Harry Mortimer Award for Outstanding Achievement amongst others. Having studied at both the Royal Northern College of Music and the Royal Welsh College of Music David is now an Associate of the Royal College of Music London; a Professor at both the Royal Welsh College of Music & Drama, and the Birmingham Conservatoire; an Artist for the Buffet Group Besson, Alliance and Reunion Blues; and a Director of Prima Vista Musikk publishing.
A proud product of the British brass band movement David has performed with many of the world’s premiere brass bands including Brighouse & Rastrick, Black Dyke and Cory with whom he was principal euphonium for 10 years. He is a founder member of the highly successful brass quartet Eminence Brass and Artistic Director of Wales’ premiere wind orchestra Cardiff Symphonic Winds.
David is undoubtedly leading the way for euphonium players worldwide. Through his own performances he continues to showcase the euphonium as a serious solo vehicle within the world of classical music.