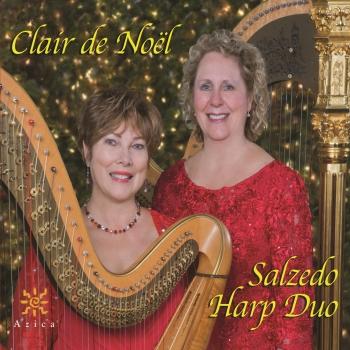 Nancy Lendrim
has been Principal Harpist of the Toledo Symphony Orchestra since 1980. A graduate of the Oberlin Conservatory of Music and the Cleveland Institute of Music, Nancy was a student of renowned harpist Alice Chalifoux. Her studies included twelve summers with Chalifoux at the Salzedo School in Camden, Maine.
A native of Williamsburg, Virginia, Nancy has participated in several summer music festivals, including those in Breckenridge and Evergreen, Colorado; Madison, Wisconsin and Graz, Austria.
She has appeared frequently as a soloist with The Toledo Symphony on their Chamber, Mainly Mozart and Neighborhood Concert series. She has also performed with the Cleveland Orchestra, Atlanta Symphony and the Erous world premiere performances. As a member of the Salzedo Harp Duo with Jody Guinn, she released in 2004 a CD of Salzedo's music.
Teaching has always been an important part of Nancy's career. She is a member of the music faculty at the University of Toledo and at Heidelberg College and was formerly on the faculty of the National Music Camp in Interlochen, Michigan and the Toledo School for the Arts. She has appeared as a performer, presenter and clinician at both regional and national harp conferences, and in 2002, performed at the World Harp Congress in Geneva, Switzerland as a member of both the Salzedo Harp Ensemble and the Salzedo Harp Duo.
Offstage, Nancy maintains an active roster of private students, is President of the Northwest Ohio Chapter of the American Harp Society, and is a regular contributor to The Harp Column magazine. She lives in Sylvania, Ohio with husband Roger Grieve and sons Elliot and Oliver.
Jody Guinn
has been the principal harpist of the Akron Symphony Orchestra since 1984. Additionally, she played principal harp for the Cleveland Opera from 1984 until 2010 and the Cleveland Ballet and the Ohio Chamber Orchestra for 17 years while both organizations were in existence in Cleveland. She has been substituting or playing extra harp with the Cleveland Orchestra since 1986 including numerous tours to Europe, New York City’s Carnegie Hall, Lincoln Center’s Avery Fisher Hall and Washington D.C.’s Kennedy Center. With the Cleveland Orchestra, she has recorded numerous works, most notably two Wagner operas, on the Decca label. She continues to join the Cleveland Orchestra on their domestic, European and Asian tours, including residency programs in Bloomington, Indiana; Miami, Florida; Vienna and Salzburg, Austria; and Lucerne, Switzerland. For many years, Jody also played with the Cincinnati Symphony Orchestra, touring Japan, California and New York, and recorded several orchestral works on the Telarc label. She has been privileged to work under the batons of several maestros, including composer/conductor John Adams, Pierre Boulez, Christoph von Dohnanyi, Paavo Jarvi, Jahja Ling and Franz Welser-Most, current conductor of the Cleveland Orchestra. Other orchestras in which Jody has appeared include the Florida Orchestra, the Houston Symphony, the Baltimore Symphony and the Philadelphia Orchestra. Other artists with which Jody has performed include the Three Tenors, Barry Manilow, Ray Charles, singer Josh Groban, Clay Aiken, Wynona Judd and Jackie Evancho. Currently, she is serving as second harp in the Cleveland Orchestra.
Jody received an undergraduate degree from Colorado State University where she was a pupil of Mrs. Suzann Davids. She received a Master of Music degree in harp performance from the Cleveland Institute of Music studying with world renowned harpist Alice Chalifoux. She also attended numerous summer study programs at the former Salzedo School in Camden, Maine.
In 2002, Jody was honored to have performed, along with six of her colleagues, at the Eighth World Harp Congress held in Geneva, Switzerland. Currently, she is a member of the Salzedo Harp Duo along with colleague Nancy Lendrim, principal harpist of the Toledo Symphony. Together, they have presented many duo-harp concerts and master classes across the country since the release on the Azica label of their CD titled “Short Stories” in June 2004. In February 2006, the duo’s recording of Debussy’s “Clair de Lune” was featured on the CBS daytime drama “The Young and the Restless.” The duo appeared at the American Harp Society National Conference in June 2008 in Detroit playing on a concert honoring the 100th Birthday of their mentor and teacher, Alice Chalifoux. In July 2008, they traveled to Amsterdam where they performed works by Salzedo on a concert at the Tenth World Harp Congress.
Jody shares her love of the instrument with about 30 students, ages 6 to 79, and is on the faculty of Baldwin Wallace University Conservatory of Music, Case Western Reserve University, the Preparatory Department of the Cleveland Institute of Music, Cleveland State University and Westminster College in New Wilmington, Pennsylvania and has taught at Malone College in Canton, Ohio. Jody plays a Lyon and Healy Style 23 Concert Grand harp.