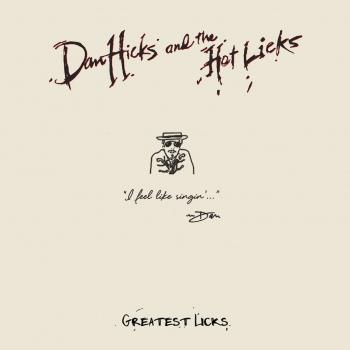 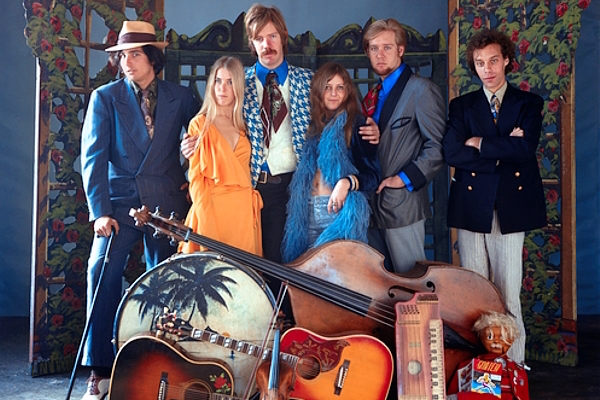 Dan Hicks
was born December 9, 1941 in Little Rock, Arkansas, the son of a career military man. The family moved to California when Dan was about five, eventually settling in what was then the small city of Santa Rosa, some 50 miles north of San Francisco.
Musically, Dan started out as a drummer, beginning while still in grade school. He played the snare drum in his school marching band, and by the age of 14 was playing gigs with area dance bands.
In High School, Dan developed an interest in broadcasting, and had a rotating spot on a daily 15-minute local radio program called "Time Out for Teens". He entered San Francisco State College in 1959, eventually earning a degree in Broadcasting. He took up the guitar around '59, and became part of the San Francisco folk music scene, playing and singing in local coffeehouses.
In the spring of 1965, Dan became the drummer for a nascent San Francisco folk-rock group called The Charlatans, who at that time were more of a concept than an actual working band. They did, however, find employment that summer as the house band at the newly opened Red Dog Saloon in Virginia City, Nevada. The popular hallucinogen-fueled dances held at the Red Dog were the direct inspiration for the legendary psychedelic San Francisco dancehall scene that blossomed shortly thereafter.
In addition to drumming, Dan also played guitar and sang with The Charlatans, performing some of his original songs. The Charlatans played for several years at all the noted San Francisco halls, but never achieved the commercial success enjoyed by other groups that came on the scene after them, such as Jefferson Airplane, The Grateful Dead and Quicksilver Messenger Service. As Dan explains it, "The Charlatans were kind of dysfunctional anyway. There was no real management, and it was just kind of some loose guys".
Dan had other ideas about the kind of music he wanted to make, and began putting together an acoustic combo which included two female backup singers, who were dubbed "Lickettes". Billed as Dan Hicks And His Hot Licks, the group began as an opening act for The Charlatans. However, Dan soon left the Charlatans and focused his energy on the Hot Licks.
Their efforts resulted in a recording contract with Epic Records. "Original Recordings" was released in 1969, but Epic's promotion of the album and the group was lackluster, and it was not a commercial success.
After some personnel changes, and a deal with Blue Thumb Records, what had then become the "classic" Hot Licks ensemble went on to produce the critically acclaimed and commercially successful albums "Where's The Money?” "Striking It Rich" and "Last Train To Hicksville". But, owing to pressures both internal and external, Dan broke up the Hot Licks in 1973, at the height of the band's popularity.
Dan then began a low-key solo career of acoustic performances. He wrote music for commercials, television, and movies-- including the music for a never released Ralph Bakshi animated film. That music was eventually packaged and released in 1978 by Warner Bros. Records as "It Happened One Bite", with cover artwork by Dan.
In the 1980s, he formed The Acoustic Warriors, a male combo with whom he toured. In 1994, they recorded the superb (and now out-of-print) live CD "Shootin' Straight", for the Private Music label.
Dan signed with Surfdog Records in 1998. "Beatin' The Heat", Dan's first studio opus since 1978, was released in August of 2000. It featured a return to the Hot Licks name and format - complete with new Lickettes. It garnered rave reviews, and was chosen by Time.Com as one of the Top Ten CDs of 2000. A live CD ("Alive & Lickin'") soon followed.
In September of 2003, Surfdog released a DVD/CD package featuring much of Dan's 60th Birthday Bash concert, as well as interviews with musicians of note speaking about Dan's influence.
2004 saw the release of "Selected Shorts", a dynamic and critically acclaimed studio CD, featuring contributions from such stars as Jimmy Buffett, Jim Keltner, Gibby Haynes, Van Dyke Parks and Willie Nelson.
"Tangled Tales", also on the Surfdog label, was released in 2009 to glowing reviews.
2010 saw the long-anticipated release of a Dan Hicks & The Hot Licks Christmas CD, and it was all Hicks fans had hoped for - and more! "Crazy For Christmas" was lauded by NPR's Fresh Air, the NY and LA Times, and The Washington Post. Called one of the Best of 2010 by the Village Voice, "Crazy For Christmas" also landed on Billboard's Heatseekers Chart.
In 2012, there was a huge concert event to celebrate Dan's 70th birthday. It was an amazing evening featuring guest appearances by Ricki Lee Jones, Harry Shearer, Maria Muldaur, Roy Rogers, Tuck and Patti, Sid Page, Ramblin' Jack Elliott, and many others! The night resulted in Dan’s latest release “Live at Davies” which has several of Dan's biggest hits as well as some never before released live!
Today, Dan tours worldwide with an updated version of the Hot Licks, and occasionally gigs at various jazz venues in the San Francisco Bay Area, as a vocalist with his swingin' combo Bayside Jazz.
Not only does Dan Hicks continue to delight his long-time fans, he has earned the attention of a whole new generation of music lovers.