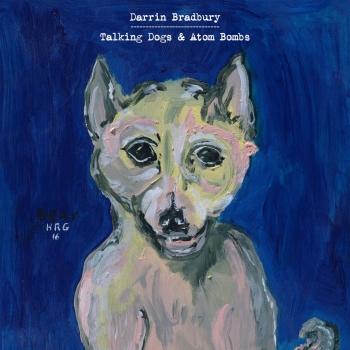 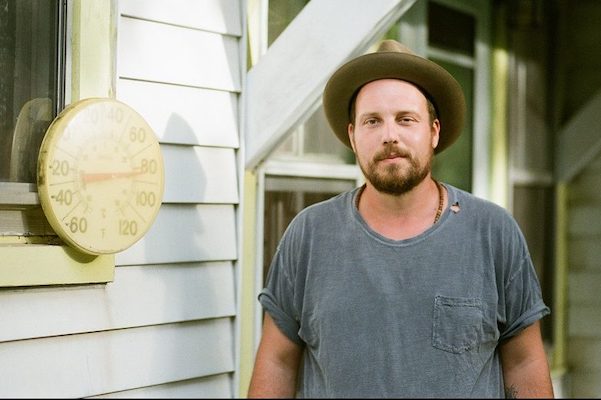 Darrin Bradbury
writes about the way things really are in America – a singular perspective shaped by a natural gift for storytelling, a lingering battle with depression, and a sly sense of humor. A self-described folk satirist who has toured the country for more than a decade, Bradbury collects his oddball observations in Talking Dogs & Atom Bombs, his first album for ANTI- Records.
“To be able to see the humor in the hard things in life has always been my goal,” he says. “I think the point of the songs is to make you feel better. Hopefully it’s the kind of record that if things are going really wrong in your life, it would be there for you in a way that you’re like, ‘Man, I’m glad this thing exists because it gets me.’”
Bradbury recorded Talking Dogs & Atom Bombs in just two days in Nashville with producer Kenneth Pattengale of the Milk Carton Kids and backed by musicians Jeremy Ivey, Alex Munoz, and Dillon Napier. Margo Price, a close friend and one of Bradbury’s biggest champions, sings harmony on “The Trouble With Time,” which captures the sadness, beauty, and wit found throughout the album.
“When I write, there are things that I want to get away with,” Bradbury says. “I want to get away with the line, ‘I woke up this morning and I got out of bed / Tripped on my pants and fell on my head.’ If I can get you to take that seriously, and not skip a beat when you listen to it, that's what I want.”
Bradbury grew up in New Jersey with an early interest in performing, partly because of his mother’s career as a circus clown. At the age of 7, he felt certain that he would either become a songwriter or a cartoonist. (He is quick to cite Billy Joel and Calvin & Hobbes as early influences.) He says he learned to play guitar as a vessel to tell his stories -- and because his handwriting and grammar steered him away from being a novelist. By the age of 18, he’d discovered Bob Dylan, Jack Kerouac, and Paul Simon, and decided to hit the road. Within a year, he’d seen 38 states.
At 25, he moved from Charlottesville, Virginia, to Nashville, to try making it as a songwriter. For three months in the dead of winter, he slept in his Ford Focus in a Walmart parking lot, with his bass player in the passenger seat. At every opportunity they’d play open mic nights, sometimes five or six nights a week. Eventually Bradbury moved into a sketchy duplex, and then into a friend’s Airstream trailer. By the time he played his first show at the 5 Spot – perhaps the nexus of East Nashville’s music scene – he’d developed enough of a following around town that he drew a sizable crowd.
With a handful of self-funded EPs and albums, Bradbury steadily cultivated a national audience by touring constantly. After being introduced to Pattengale at a Nashville gig, the two musicians stayed in touch. That led to a mentoring friendship, an invitation to open shows for the Milk Carton Kids, and Pattengale’s offer to produce Talking Dogs & Atom Bombs.
Speaking about the title track, Bradbury says, “I think the takeaway from that song is that nobody really knows anything. I don’t know when it will stop raining. It’s a song about being let down by life. All of our dreams are silly and nobody knows what’s going to happen.”
Indeed, a dark humor is woven through many of the songs on Talking Dogs & Atom Bombs. “It’s an album trying to combat depression, to laugh your way out of depression, and to be honest and accurate with that depression,” Bradbury believes. However, the album is also surprisingly upbeat due to his wry sense of humor. For example, “Breakfast” begins with a real-life observation of seeing two squirrels seemingly involved in a romantic relationship, when suddenly a hawk swoops down and carries one away. And that’s just within the first minute.
“I try to write things that make me chuckle, and that chuckling is usually making peace with the existential dilemma of both the times and life in general,” Bradbury says. “A lot of times, it’s like a challenge. It’s like, ‘All right, I’m starting this song off about squirrels, comparing them to Romeo and Juliet. Can I bring this sucker home? Can I make that idea work?’”
While performing, he’s seen the audience wondering the exact same thing – Is this guy going to pull this off? Bradbury compares the on-stage experience to standup comedy, where he carries the audience through to the relief point. Delivered in an almost conversational tone, “This Too Shall Pass” is laugh-out-loud funny, while “Nothing Much” (written by Jeremy Ivey) is well-suited to Bradbury’s own self-deprecating humor. “Motel Room, Motel Room” finds universality in an unexpected place (namely, the bed on the other side of the wall), and “So Many Ways to Die (Frozen Pizza)” is essentially a suicide manual with dinner thrown in. The album concludes with “Dallas 1963,” a short dream sequence that positions Bradbury as JFK’s assassin.
The payoff in Talking Dogs & Atom Bombs comes from listening closely to someone who’s been paying attention. “The American Life” is brutally honest in its assessment, down to politicized fried chicken and stadium-like churches. “Hell’s More or Less the Same” conveys Bradbury’s expert comic timing, while the very short “Strange Bird” is true to its title. In fact, all but two of the album’s 10 songs are under three minutes long -- and that’s by design.
“In the writing of this album, what was important to me was that the song was over when the thought was over. It wasn't about having to fill a certain amount of space,” Bradbury says. “If I'm not motivated to say anything more about this particular thing, I won't force it. I would rather have a minute-and-a-half song that I felt conveyed something unique.”