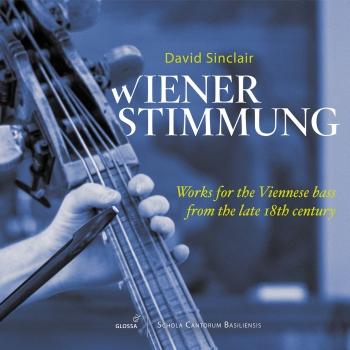 Wiener Stimmung: Works for the Viennese Bass from the Late 18th Century

David Sinclair
Canadian bassist David Sinclair received his initial training in Toronto from Nanci-Carole Davis, later worked with Joel Quarrington und finished his bachelor’s degree in Boston under Lawrence Wolfe und Edwin Barker. As recipient of Boston University’s Kahn Award and with the support of the Canada Council and the Chalmers Fund, he was subsequently able to study for two years with Ludwig Streicher in Vienna. In 1987 he was appointed principal bass of the Camerata Salzburg under Sandor Vegh. Since 1992 he has lived in Paris and has pursued an intensive career as a freelance bassist, performing orchestral, chamber and solo repertoire, which has brought him together with a large number of ensembles on both historical as well as modern instruments. He has participated in over 160 CD recordings. As a soloist, David Sinclair is known for his pioneer - ing work with the Viennese double bass, on which he has already made a number of CDs. In 2011 he received the “Special Recognition Award” of the International Society of Bassists (ISB) for his contributions to historical performance practice. David Sinclair has taught since 1996 at the Schola Cantorum Basiliensis FHNW and since 2012 at the Bern University of the Arts. He plays a Viennese double bass by Johann Christoph Leidolff from 1729. The ensemble on this recording is made up of teachers and former students of the Schola Cantorum Basiliensis. They all share the ideals of the Basel training institution and a common understanding of ensemble playing. Since its creation in 1933, the Schola Cantorum Basiliensis (SCB) and its working philosophy have lost nothing of their topicality. Founded by Paul Sacher and close colleagues in Basel, Switzerland, this School of Early Music (since 2008 part of the University of Applied Sciences and Arts North - western Switzerland) remains to this day unique in numerous respects. From the very beginning, musicians gathered here who decisively influenced the course of historical performance practice. The scope of activities at the SCB ranges from the early Middle Ages to the 19th century. And as a result of the close co-operation between performers and scholars, a dynamic interaction exists between research, professional training, concerts, and publications. In all of this, the SCB operates with a broad definition of music. This arises from a particular approach which explores the historical context of past musical production to create musical interpretations that inspire the listener today – often combined with a fascination for the previously unknown. The CD productions play their part in bringing important projects and performers at the SCB to a wider audience. Around 80 such recordings have been produced on different labels since 1980. From 2010 the CD productions of the SCB have appeared on Glossa.