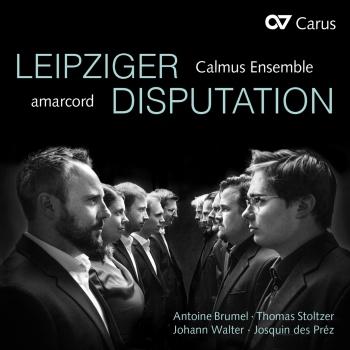 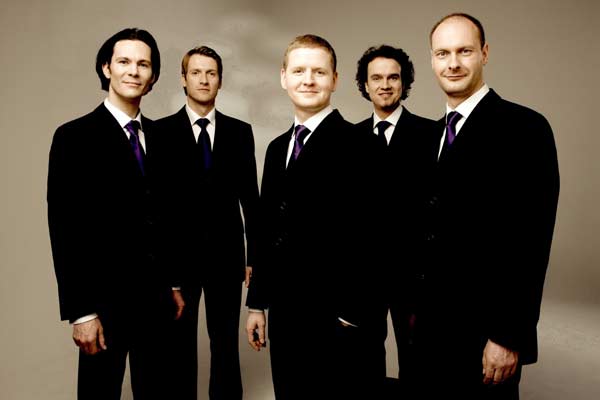 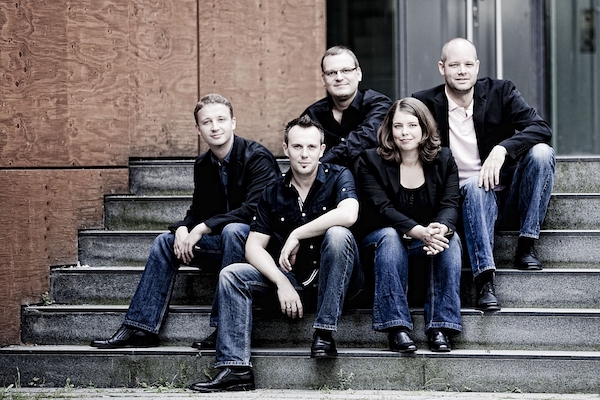 Amarcord
Founded in 1992 by erstwhile members of St. Thomas’s Boys Choir in Leipzig, amarcord has since become one of the world’s leading vocal ensembles. amarcord’s hallmarks include a unique tone, breathtaking homogeneity, musical authenticity, and a good dose of charm and humor. amarcord performs a vast and highly diverse repertoire of music, from medieval plainsong to madrigals and Renaissance Masses, to compositions and cycles of works of the European Romantic period and the 20th century, arrangements of a cappella folksongs collected from all over the world, all the way to soul and jazz charts.
Alongside the Gewandhaus Orchestra and St. Thomas’s Boys Choir, amarcord is now one of the leading representatives of Leipzig’s music scene in Germany and abroad. amarcord regularly appears at important music festivals. Numerous concert tours have taken the singers to more than 50 countries and nearly every corner of the globe. In cooperation with the Goethe Institute, the ensemble has made guest appearances in Australia, Southeast Asia, the Near East, Russia and Central America.
Founded by amarcord in 1997 under the artistic direction of the group, the International Festival of Vocal Music “a cappella” (www.a-cappella-festival.de) has established itself as one of the most important festivals of its kind. Held in Leipzig in spring each year, premier vocal formations such as The Real Group, The King’s Singers or Take 6 can be heard at the festival.
Numerous CD recordings document impressively the many facets of amarcord’s repertoire and won many important prizes. In 2014 amarcord won its sixth Contemporary A Cappella Recording Award, also called the “a cappella Oscar,” for the CD Folks & Tales. The recording Zu S Thomas, containing two Gregorian Masses from the Thomas Gradual of St. Thomas Church, was awarded the International Classical Music Award (ICMA), the most important European Record Critics’ Prize, in 2013. One year earlier the singers received the prestigious ECHO-Klassik Award in the category for “Ensemble of the year/vocal” for the recording Das Lieben bringt groß’ Freud!.
Calmus Ensemble
A perfect blend of sound, precision, lightness and wit. These are the hallmarks of Calmus, now one of the most successful vocal groups in Germany. The ensemble has forged a refined sound which few groups achieve. The wide range of sound colors, the joy in performing that the musicians convey on the concert platform, and their varied and imaginative programs are praised by the press time and time again. These five Leipzig musicians have won a whole string of international prizes and competitions, including the ECHO Klassik and Supersonic Award, and the reach of their activities is constantly expanding, taking them throughout Europe as well as to North and South America. In 2010 the quintet made its debut at Carnegie Hall, New York.
The musicians are tireless in their quest to discover new repertoire. Shaped by the centuries-old tradition of great German boys’ choirs, they are naturally at home in the vocal music of the Renaissance, the Baroque and the Romantic. The music of our own time is also a real passion. In all their ventures, there are frequently interesting partnerships with musicians such as the Lautten Compagney Berlin, the Raschèr Saxophone Quartet, Hamburger Ratsmusik and the Frankfurt Radio Bigband. As this often means totally new repertoire in the area of contemporary music, over the years Calmus has commissioned numerous new works from composers including Bernd Franke, Steffen Schleiermacher, Wolfram Buchenberg, Mathew Rosenblum, Bill Dobbins, Michael Denhoff and Harald Banter, and the group has given many world premieres. It goes without saying that they revel in singing pop, folk and jazz, as well as chansons and evergreens from the 1920s.
Part of their work is devoted to encouraging the up-and-coming generation, so teaching and workshops are part of their regular schedule, both at home in Leipzig and on their travels. It’s no wonder that Calmus, with its unique line-up of soprano, countertenor, tenor, baritone and bass, is gaining more and more fans worldwide.