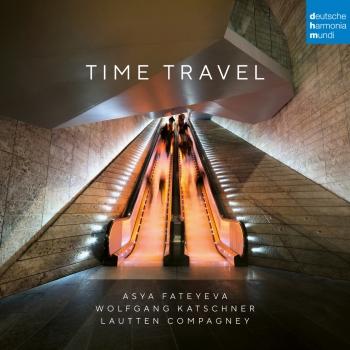 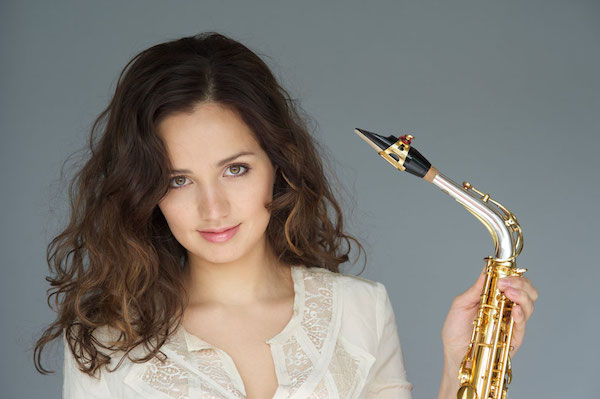 Asya Fateyeva
“A sensation for the music world” the Frankfurter Allgemeine Zeitung raved after one of Asya Fateyeva’s concerts. The young classical saxophonist, winner of the Best Newcomer ECHO Klassik 2016, is an outstanding representative in her field. In 2014 she was the first woman to reach the final of the prestigious Adolphe Sax International Competition in Belgium, where she played herself into third place. That same year the musicologist Dr Harald Eggebrecht wrote about her in the Süddeutsche Zeitung: “[She] plays the alto saxophone so elegantly and effortlessly that the beauty of the sound she conjures up in Debussy’s Rhapsody for Saxophone and Piano beguiles her listeners.”
Asya Fateyeva, born on the Crimean peninsula in 1990, has a wide repertoire which includes original works written for her instrument, as well as Baroque, Classical and Romantic pieces which she often arranges herself. Fateyeva has set herself the goal of seeing the classical saxophone gain its rightful place in the music world. Now a resident of Hamburg, she began teaching Classical Saxophone at the Musikhochschule Münster in 2014.
The list of Asya Fateyeva’s awards and scholarships is long. As well as coming third in the Adolphe Sax International Competition in 2014, she won numerous first prizes in international competitions in Russia, France and Germany. She also won the German Music Competition in 2012 and, among other awards, received the ZEIT Foundation’s Gerd Bucerius Scholarship and an award from the Orpheum Foundation. In 2015 Asya Fateyeva received the Berenberg Culture Award, endowed with 10,000 euros. Professor Hermann Rauhe, a Member of the Board of Trustees, praised her, saying: “Asya Fateyeva has exceptional talent and stands out from other musicians on account of her warm, elegant playing.”
In the 2015/16 season alone Asya Fateyeva was invited to play concerts in numerous famous concert halls, including in the Gewandhaus in Leipzig (together with the MDR Symphony Orchestra conducted by Kristjan Järvi), in the Berliner Philharmonie, the Konzerthaus Berlin and the Mariinsky Theatre in St Petersburg. She also played at the Lucerne Festival.
Further highlights have included performances with the Vienna Symphony Orchestra conducted by Vladimir Fedoseyev in the Musikverein Vienna, with the Tchaikovsky Radio Symphony Orchestra, the Ukrainian National Philharmonic, the Istanbul State Symphony Orchestra and the Giuseppe Verdi Symphony Orchestra of Milan. She has also played with orchestras from Bochum, Bonn, Frankfurt an der Oder and Kassel. Her concerts at festivals in Colmar, Fermo, Cologne, Moscow and St Petersburg, at the Mecklenburg-Western Pomeranian Festival and the Music Festival Spannungen in Heimbach struck a chord with many.
As winner of the first prize at the German Music Competition in 2012, Asya Fateyeva recorded her debut album of works by Mishat, Ibert (for alto saxophone and orchestra), Albright and Decruck (for alto saxophone and piano) in 2015. The project was funded by the German Music Council in cooperation with Deutschlandradio. She won the Best Newcomer ECHO Klassik 2016 award for this CD, which was released under the Genuin classics label.
Asya Fateyeva went on to record the CD Fantasia in 2016 together with the clarinettist Sabine Meyer and the Alliage Quintet. It was released by Sony Classic.
The daughter of a professional footballer, Asya Fateyeva began taking piano lessons with Valentina Nikishina at the age of six. It was Lilija Russanova, her teacher from the age of ten in Simferopol, who gave her an understanding of the French saxophone tradition. Later, she was taught by Professor Margarita Shaposhnikova at the famous Gnessin Institute in Moscow, and took master classes in Gap, France. Asya Fateyeva moved to Germany in 2004. At the Hochschule für Musik und Tanz Köln she was first taught as a junior student by Professor Daniel Gauthier for two years before progressing to her regular course of studies in the French Canadian’s class. Study trips to France, where she was taught by Claude Delangle in Paris and Jean-Denis Michat in Lyons, provided crucial creative inspiration. In 2016 she successfully completed a postgraduate degree in chamber music with her duo partner, the pianist Valeriya Myrosh, at the Hamburg School of Music and Theatre, where her teacher was Professor Niklas Schmidt.
lautten compagney BERLIN
is one of the most renowned and creative baroque instrument ensembles in Germany. Their concerts, under the artistic direction of Wolfgang Katschner, have fascinated audiences for three decades. With their infectious joy in performing and their innovative concepts, these ‘early musicians’ effortlessly translate the musical language of the Baroque to the present. Whether it’s as a solo chamber ensemble or an opera orchestra, the ensemble is continually crossing boundaries and seeking out encounters with new sounds and other art forms. The ensemble has received numerous awards for its exciting musical collaborations. For its CD recording of the programme “Timeless”, combining early Baroque music with works by Philip Glass, it received an ECHO Klassik award in 2010. And their winning the Rheingau Music Prize 2012 was in recognition of the lautten compagney’s creative concert programming. The lautten compagney is a regular guest at leading national and international concert halls and festivals, including Concertgebouw Amsterdam, Vienna Musikverein, Rheingau Musik Festival, Handel Festival Halle, Mosel Musikfestival and Oude Muziek Festival Utrecht.