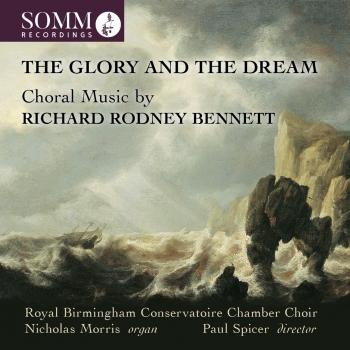 The Glory and the Dream: Choral Music by Richard Rodney Bennett 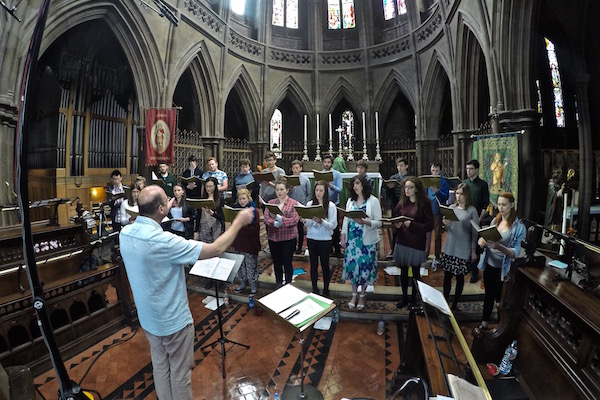 Birmingham Conservatoire Chamber Choir
is conducted by Paul Spicer and is a group of twenty four auditioned student singers who form an expert and flexible group. They perform with sensitivity, energy and panache and are gathering an enviable reputation for their musicianship partly through their increasing recording presence which reflects their conductor's specialist interest in 20th and 21st century British music
Their first CD called To Music was an Anthology of English 20th century choral music and was CD Review Recording of the month (MusicWeb International) and the review commented. "...This is one of the finest discs to have come my way in some time". Their disc of music by Ireland and Delius partsongs on SOMM was also awarded 5-star reviews and their recording of the first ever disc to be devoted to Stanford's partsongs (also on SOMM), was chosen as 13th out of 24 discs considered the best releases of 2013 on Classic FM. The Observer commented that the music was dressed in the richly jewelled sound of the Birmingham Conservatoire Chamber Choir and that 'many a choir could learn from these singers.' Their SOMM disc When first thine eies unveil by Herbert Howells was chosen as Editor's choice in Gramophone in December 2014 and received 5 stars again in Choir and Organ.
Paul Spicer
was a chorister at New College, Oxford. He studied with Herbert Howells and Richard Popplewell (organ) at the Royal College of Music. Paul is best known as a choral conductor, partly through the many CDs he made with the Finzi Singers. He conducted Bach Choirs in Chester and Leicester before moving to conduct the Bach Choir in Birmingham in 1992. He taught at the Royal College of Music in London between 1995 and 2008. He now teaches choral conducting at the Birmingham Conservatoire, where he also directs the chamber choir which has an increasing reputation through its regular recordings of British music, and at Oxford and Durham Universities.
Until July 2001 Paul Spicer was Artistic Director of the Lichfield International Arts Festival and the Abbotsholme Arts Society, posts he relinquished in order to pursue a freelance musical career. He was Senior Producer for BBC Radio 3 in the Midlands until 1990 and today is in considerable demand as a composer. He has also been a much sought-after recording producer.
Paul Spicer's highly-acclaimed biography of his composition teacher, Herbert Howells, published in 1998, has been reprinted twice and his large-scale biography of Sir George Dyson was published in 2014 and he is now writing a biography of Sir Arthur Bliss. He was commissioned by the Britten-Pears Foundation and Boosey & Hawkes to write the first practical guide to all Benjamin Britten's choral music for the Britten centenary in 2013, something he continues to do for all James McMillan's growing choral output.
As a composer his Easter Oratorio was hailed as 'the best of its kind to have appeared.. since Howell's Hymnus Paradisi. It was also chosen as an Editor's Choice in the same magazine. His choral symphony Unfinished Remembering to a text by Euan Tait commemorating the centenary of the First World War was premiered in Symphony Hall, Birmingham in September 2014.
Nicholas Morris
spent his early musical years as a chorister at Westminster Abbey under the direction of James O'Donnell. He was subsequently a Music and Academic Scholar at Uppingham School. Between 2011 and 2014, Nicholas held the Organ Scholarship at Queen's College, Cambridge, where he also read for a degree in music. After graduation, he moved to the West Midlands and took up the post of Assistant Organist at Birmingham Cathedral. In September 2016, he joined the Choir of Clare College, Cambridge as Assistant Organist, acting as principal accompanist.
Nicholas has performed extensively as a soloist both in the UK and abroad. International engagements have included performances in Norway, the United States and in the opening concert of the 2012 of Münster Orgelsommer. UK recital venues have included St. Paul's Westminster, and Southwark Cathedrals in London, the Cathedrals in Wells, Ely and Truro and Wesminster Abbey.