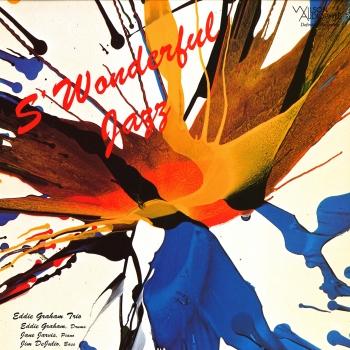 Eddie Graham
Inspired by his father who played the "bones", Ed Graham acquired an early interest in rhythm which prompted him to begin the study of drums at age nine. After moving with his family from New York to Florida at 14, Ed had a continuing television series on WTVJ, Miami, with his "Swing Kings". During this time his interest in Dixieland Jazz was fostered by an acquaintance with drummer "Preacher" Rollo Laylan who frequently imported jazz names to Miami.
Ed attended the University of Miami and performed for several seasons with the Miami Symphony before migrating to California to accompany such diverse luminaries as Jack Jones, Elvis Presley, and Anita O'Day. He toured as accompanist \ conductor for Roberta Sherwood, Vic Dana and Kay Stevens during the sixties and settled in Las Vegas on a long term contract with Latin concert pianist, Esquivel! Other jazz appearances during this period included a highly successful concert tour of Japan with the Village Stompers and several television appearances with ragtime pianist Big Tiny Little. As a percussionist in the Nevada showrooms, he accompanied Rich Little, Sammy Davis, Elvis, Johnny Mathis, and Mack Davis, and appeared with his own jazz group.
In the early seventies he was summoned to Hawaii by jazz trombonist Trummy Young and while performing there met the legendary Earl "Fatha" Hines with whom he was a featured artist from 1975 to 1980. On concert tours in Europe, Australia, South America and Japan, Ed has appeared with such artists as Benny Carter, Joe Venuti, Bobby Hackett, Red Norvo, Dorothy Donegan, Barney Bigard, and Stan Getz.
Ed's solo album for M & K Records is called "Hot Stix" and was critically acclaimed for it's sonic and inventive qualities. He recorded a live concert for Arbors (ARCD 2910) featuring an All-Star line-up including legendary bassist Bob Haggart. A Wilson Audio release titled "S' Wonderful Jazz" (WA8418) features Ed and his trio swinging Gershwin standards.
Ed can also be heard with Earl Hines on Tony Bennet's record label; Improv (Live in Buffalo) and with Marva Josie on Chiaroscuro Records (Jazz Is His Old Lady and My Old Man). A collaboration with trumpeter Billy Butterfield (Just Friends) is available on the Jazzology label.
He can be seen as percussionist in Elvis' movie "That's The Way It Is" (a concert film) and heard on Elvis' "Live From Las Vegas" albums on RCA. American Public Broadcasting and British Broadcasting Corporation documentaries showcase Ed in the context of the Earl Hines Quartet. The November 1977 issue of Downbeat magazine contains a personal profile, and a short biographical sketch of Ed is included in Leonard Feathers' Encyclopedia of Jazz in the Seventies.
In the 80's, he was musical director and featured soloist with the musical productions "Bloopers" and "Skintight" in Las Vegas and in 1983 wintered in Palm Springs as a member of the Peanuts Hucko Quartet. In 1984 he was selected to perform at the 1st L.A. Classic Jazz Festival with the Bud Freeman Quartet and the Dick Cary Allstars. He was invited back the following year to accompany Red Norvo, Norma Teegarden, and the Dick Cary group. Other major jazz festivals coast to coast range from "Newport" in New York with Earl Hines to "Monterey" in California with The Abalone Stompers. As a member of The Abalone Stompers, he has appeared at numerous west coast jazz festivals including "Jubilee" in Sacramento. With his quartet he has recorded and performed in the "King of France" jazz club in Annapolis, MD and as guest soloist for the Sacramento Traditional Jazz Society.
In 1989 Ed was a founding member of the 21 piece Monterey Peninsula Jazz Orchestra as percussionist and soloist at Clint Eastwood's Mission Ranch in Carmel. For five successive years he has been an invited artist at the annual Betty Ford Clinic fund raiser in Palm Springs, and has given educational clinics under the auspices of the Monterey Jazz Festival, and as a clinician for Slingerland and Camco drum companies.
As an Arbors Jazz Recording Artist, Ed appears on “Glendena Forever” with Rick Fay and Jackie Coon (Arbors 19004) and was featured on (Arbors 29101) in a live recording from the Friday Harbor, Washington Jazz Festival. In 1992, Arbors released the critically acclaimed “Live at the State Theatre” (Arbors 29102) featuring Ed with Rick Fay, Bob Haggart, Dan Barrett, Chuck Folds, Chuck Hedges and Jon-Erick Kellso. Since 1992, he has been a perennial guest artist at the Suncoast Classic Jazz Festival in Clearwater, Florida. The recently released boxed 4CD set "Elvis, Live In Las Vegas" shows him as percussionist.
Currently residing in the Tampa Bay Area of Florida, he continues to express his love for jazz with touring, teaching and recording. Ed has his own groups “The World’s Greatest Sub Band” and the "Hot Jazz Ensemble" and he is featured with Tampa's "42nd Street Big Band". As a member of the "Dixie Chaps" Ed performs frequently for the Sarasota and Suncoast Jazz Societies. At the annual Suncoast Classic Jazz Festival in Clearwater, Florida, Ed hosts an All-Star Jam (Eddie Graham and Friends) that gathers national and international musicians in an informal relaxed club atmosphere.
In 2005 Ed took his "Hot Jazz Ensemble" to the mountains of North Carolina and presented Jazz concerts in the heart of Appalachia at The Orchard At Altapass and the Burnsville Town Center. These concerts have become an annual event for the past five years and have broadened his music to incorporate Country and Bluegrass in a traditional Jazz style.