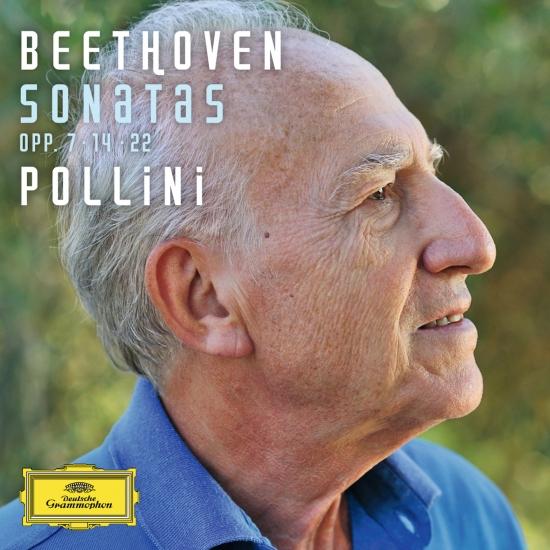 Maurizio Pollini continues to complete his cycle of recordings of all of the Beethoven Piano Sonatas. This is the second to last disc before Pollini completes the Beethoven Sonatas Cycle.
One of the greatest pianists of our time presents his own unique and individual survey of giants of the piano repertoire.
Recorded at the KKL Luzern and the Herkulessaal (Residence) in Munich.
A special album from a special pianist – and one with appeal beyond the world of piano aficionados.
Maurizio Pollini is one of Deutsche Grammophon’s icons, having been exclusively with the company for over four decades.
“a curious mix of the magisterial and the severe...But sometimes the overbearing element can vanish altogether, as it does in Pollini's delicate, quicksilver account of the first of the Op 14 pair...No one who has followed this cycle will think twice about hearing this latest batch of performances” (The Guardian)
“In Beethoven Op. 7 Sonata, Maurizio Pollini pounces on the composer's Allegro molto e con brio directive with joyful momentum...the pianist's superb articulation of the G major's central Andante's detached chords and cross-rhythmic accentuation the music's proximity to Haydn” (Gramophone Magazine)
“Needless to say, there's some dazzling pianism on display but Pollini's fondness for lightning-quick tempos all to often denies the music breathing space.” (BBC Music Magazine)
“The hallmarks of Pollini's musical and pianistic style are everywhere in evidence here: his powerful technique, the elegance and delicacy of his fingerwork even when the music is dramatic or forceful” (International Record Review)
Maurizio Pollini, piano

Maurizio Pollini
was born in 1942 and studied with Carlo Lonati and Carlo Vidusso. After winning First Prize at the 1960 Warsaw Chopin Competition, he went on to establish an international career of the greatest importance, performing in the world’s major concert halls and working with the most distinguished orchestras and conductors including Karl Boehm, Herbert von Karajan, Claudio Abbado, Pierre Boulez, and Riccardo Muti. He was awarded the Vienna Philharmonic Ehrenring in 1987 after performing the Beethoven concertos in New York, the Ernst-von-Siemens Music Prize in Munich in 1966, the ‘A Life for Music – Arthur Rubinstein’ Prize in Venice in 1999 and the Arturo Benedetti Michelangeli Prize in Milan in 2000.
In 1995 Maurizio Pollini opened the Festival that Tokyo dedicated to Pierre Boulez and, in the same year, he devised and performed in his own concert series at the Salzburg Festival. He gave similar concert series in New York at Carnegie Hall, in Paris for la Cité de la Musique,Tokyo, and in Rome at the Parco della Musica. The programmes included both chamber and orchestral performances and mirrored his wide musical tastes from Gesualdo and Monteverdi to the present. In summer 2004 he was the ‘Artist Etoile’ at the International Festival Lucerne, performing a recital and concerts with orchestra conducted by Claudio Abbado and Pierre Boulez.
Maurizio Pollini’s repertoire ranges from Bach to contemporary composers (including première performances of Manzoni, Nono and Sciarrino) and includes the complete Beethoven Sonatas, which he has performed in Berlin, Munich, Milan, New York, London, Vienna and Paris. He has recorded works from the classical, romantic and contemporary repertoire to worldwide critical acclaim. His recordings of the complete works for piano by Schoenberg, and of works by Berg, Webern, Manzoni, Nono, Boulez and Stockhausen, are a testament to his great passion for music of the 20th century. Most recently Maurizio Pollini was responsible for the commissioning of the expansion of the original Grido (String Quartet No.3) by Helmut Lachenmann - a pupil of Nono - into Double (Grido II) for a 48-strong string orchestra.
In 2007 Pollini was awarded a Grammy for best Instrumental Soloist Performance and the Disco d’Oro; he received the 2006 Echo Award in Germany, and the Choc de la Musique, Victoires de la Musique and Diapason d’Or de l’Année in France. Most recently he won the Echo Klassik award in the Best Concerto category for his recording of the Brahms First Piano Concerto with Christian Thielemann and the Staatskapelle Dresden.
In 2010 Pollini performed the Chopin Birthday Recital on the anniversary of the composer’s birth in the International Piano Series in London as part of the Chopin 200 celebrations and last season he played a highly successful series of five recitals in the Piano Series at the Royal Festival Hall - The Pollini Project – charting the development of piano music from Bach to Boulez, for which he won the prestigious Royal Philharmonic Society Instrumentalist award.