Adams: The Gospel According To The Other Mary Los Angeles Philharmonic Orchestra 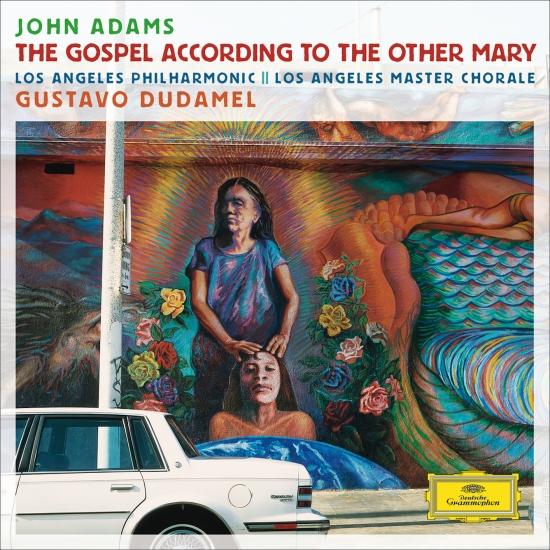 Info for Adams: The Gospel According To The Other Mary

World Premiere Recording Of John Adams’ ‘21st Century Masterpiece’. A timely, controversial work of grand proportions, The Gospel According To The Other Mary is a new, full-scale reimagining of the Bach oratorio from composer John Adams and iconoclast writer/director Peter Sellars.
Adams and Sellars’ previous collaborations included Nixon In China, the most-performed American opera since Gershwin’s Porgy and Bess, and Dr. Atomic, an opera about the invention of the atomic bomb.
Focusing on the often marginalised perspectives of Mary Magdalene and Martha, ‘The Gospel According To The Other Mary’ sets Biblical characters and events, including the resurrection of Lazarus and the passion of Christ, in a powerfully political, contemporary light.
As with the nativity oratorio El Niño (a response to Handel’s Messiah), and the opera Dr. Atomic, the libretto hsd been assembled by Peter Sellars, who has interwoven events from the New and Old Testaments with poetry reflecting themes of faith and liberation from the 12th Century mystic Hildegard von Bingen, to the 20th Century Mexican feminist poet Rosario Castellanos.
This World Premiere recording, featuring the original cast, was made in Disney Hall, Los Angeles, at performances staged by Peter Sellars - with soloists, the Los Angeles Master Chorale and the Los Angeles Philharmonic conducted by Gustavo Dudamel.
A champion of contemporary music and social engagement through art, Gustavo Dudamel commissioned ‘The Gospel…’, together with the LA Phil, as part of a long-standing creative relationship with John Adams.
This important DG release marks the 5th Anniversary of Gustavo Dudamel’s appointment as Music Director of the Los Angeles Philharmonic and the 10th Anniversary of the LA Phil’s home, Walt Disney Concert Hall.
Packaging: the 2 CD set will come in a digisleeve with a booklet of c. 100 pages. It will contain an introduction by the composer and a synopsis by Peter Sellars in English; plus the libretto in the original languages (English and Spanish) with English translations of the Spanish texts.
„Miracles are violent and terrifying, with the resurrection of Lazarus (heroic Russell Thomas) a rehearsal for Christ's resurrection. Mezzosoprano Kelley O'Connor is an impactful Magdalene -- unruly, extravagantly passionate. Contralto Tamara Mumford has mesmerising beauty and depth of tone. Under Gustavo Dudamel, the Los Angeles Philharmonic play with blistering force . . .“ (Anna Picard, BBC Music Magazine)
„. . . one of the most striking of his recent works . . . the strengths of the score emerge powerfully. With a trio of countertenors delivering the narrative like evangelists, and a scattering of solo arias and choruses, the parallels with Bach's passions are clear, but [Adams has created his own synthesis] . . . unlike anything else in the choral repertoire.“ (Andrew Clements, The Guardian)
Los Angeles Master Chorale
Los Angeles Philharmonic
Gustavo Dudamel, conductor
Recorded in Los Angeles, Walt Disney Concert Hall, 3/2013
Engineered by Enno Mäemets
Editing by Alexander Feucht, Friedemann Engelbrecht
Mix and Mastering by Wolfgang Schiefermair
Produced by Friedemann Engelbrecht (Teldex Studio Berlin)

Booklet for Adams: The Gospel According To The Other Mary