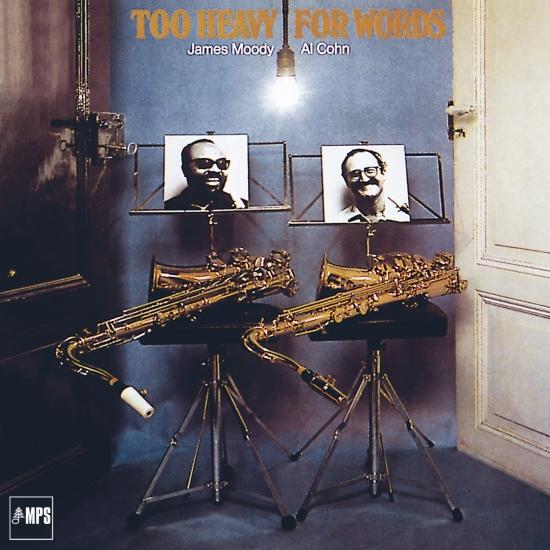 Info for Too Heavy for Words (Remastered)

Tenor sax battles have been an indelible part of jazz, as witnessed by the legendary Coleman Hawkins/Lester Young battles, the classic Dexter Gordon/Wardell Gray albums, and the Rollins/Coltrane "Tenor Madness". Add this 1971 skirmish between James Moody and Al Cohn to the list. A mainstay in Gillespie's big band and quintet, Moody worked with many of the music’s greats. His solo on I'm in the Mood for Love is a jazz classic. Cohn is recognized for his part in Woody Herman’s famous Four Brothers tenor sax section, as well as his quintet with fellow tenor great Zoot Sims.
Moody and Cohn grew out of many of the same influences, and the two speak the same language: bop. They are backed by the exceptional rhythm section of legendary pianist Barry Harris, bassist Sam Jones, and drummer Billy Brooks. Harris takes a Monkish intro on East of the Sun, with Moody's aggressive solo style set in congenial contrast to Cohn's more relaxed behind-the-beat play. After Harris’ solo, James and Al trade fours. Moody is featured on his charming ballad Vezzioso; a sense of Strayhorn runs through the piece, as Moody triple-times through the changes, while Harris keeps it slow and lovely. The two tenors are back together having fun on Tad Dameron’s jazz classic Good Bait; Moody takes off, while Cohn keeps it low-down and easy.
J.J. Johnson's blues We Dot is played at a bopping up-tempo; Al takes the first solo followed by James. There’s an extended Harris solo before Moody begins trading choruses with Cohn. With his laid-back, bluesy rendition of The Underdog, Cohn contributes a ballad of his own. On his relaxed-and-swinging Mr. George, Cohn takes the first solo, followed by Moody and Harris. The tenors then take turns trading eights with the drums, with Al taking first dibs. It’s a harmonious clash between like-minded tenor sax giants who are too heavy for words!
James Moody, tenor saxophone
Al Cohn, tenor saxophone
Roy Brooks, drums
Barry Harris, piano
Recorded August 12th, 1971
Engineered by Paul Goodman
Produced by Don Schlitten
Digitally remastered 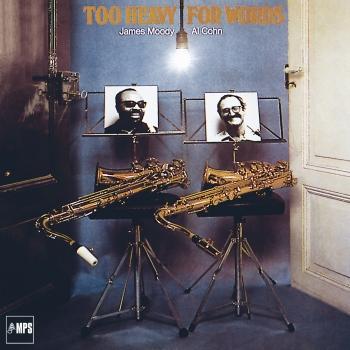 Too Heavy for Words (Remastered)

James Moody
was born in Savannah, Georgia. Growing up in New Jersey, he was attracted to the saxophone after hearing George Holmes Tate, Don Byas, and various saxophonists who played with Count Basie, and later also took up the flute. He joined the US Army Air Corps in 1943 and played in the "negro band" on the segregated base. Following his discharge from the military in 1946 he played bebop with Dizzy Gillespie for two years. Moody later played with Gillespie in 1964, where his colleagues in the Gillespie group, pianist Kenny Barron and guitarist Les Spann, would be musical collaborators in the coming decades.
In 1948 he recorded his first session for Blue Note Records, the first in a long recording career playing both saxophone and flute. That same year he relocated to Europe, where he stayed for three years, saying he had been "scarred by racism" in the U.S.[1] His European work, including the first recording of "Moody's Mood for Love", which became a hit in 1952,[3] saw him add the alto saxophone to his repertoire and helped to establish him as recording artist in his own right, and formed part of the growth of European jazz. Then in 1952, he returned to the U.S. to a recording career with Prestige Records and others, playing flute and saxophone in bands that included musicians such as Pee Wee Moore and others. In the 1960s, he rejoined Dizzy Gillespie. He later worked also with Mike Longo.
In a 1998 interview with Bob Bernotas, Moody stated that he believed jazz has definite spiritual resonance.
The James Moody Quartet (with pianist Renee Rosnes, bassist Todd Coolman, and drummer Adam Nussbaum) was Moody's vehicle later in his career. Moody played regularly with Dizzy Gillespie Alumni All-Stars and the Dizzy Gillespie Alumni All-Stars Big Band and also often collaborated with former Gillespie alumnus, the trumpeter-composer-conductor Jon Faddis; Faddis and Moody worked in 2007 with the WDR Big Band in Cologne, Germany under the direction of Michael Abene. And along with Faddis, toured in 1986 with the Philip Morris Superband hosting artists like Hammond organist Jimmy Smith, Kenny Burrell, Grady Tate and Barbara Morrison. Included in this line-up were Niels-Henning Orsted Pedersen, Jimmy Heath, Kenny Washington, Slide Hampton and Monty Alexander on a four country, fourteen city one month tour of eighteen concerts notably Australia, Canada, Japan and the Philippines, starting on September 3, 1986 with its first concert in Perth, Australia. The Philip Morris Superband concept started a year previous in 1985.
On November 3, 2009, Moody appeared live in an interview conducted in both Italian and English (Moody spoke Italian) with the jazz aficionado, Nick "The Nightfly", on Radio Monte Carlo's late-night "Monte Carlo Nights" program. The chat featured an amiable Moody talking about his career.
Moody was married to Linda Moody; they resided in San Diego. He was an active member of the Bahá'í Faith. In 2005, the Moodys established the Moody Scholarship Fund[5] at the Conservatory of Music at Purchase College-State University of New York (SUNY Purchase); the first Moody Scholars, named in 2007, are saxophonist Andrew Gould and trumpeter Maxilmilien Darche. Moody was an NEA Jazz Master and often participated in educational programming and outreach, including with the International Association for Jazz Education, or IAJE.
On November 2, 2010, Moody's wife announced on his behalf that he had pancreatic cancer, and had chosen not to have it treated aggressively. Moody died in San Diego, on December 9, 2010, of complications from pancreatic cancer.
He was divorced twice, and is survived by his wife of 21 years, the former Linda Petersen McGowan; three sons, Regan, Danny and Patrick McGowan; a daughter, Michelle Moody Bagdanove; a brother, Louis Watters; four grandchildren; and one great-grandson.
Two months after his death, Moody won the Grammy Award posthumously for Best Jazz Instrumental Album for his album Moody 4B. Named in his honor, the New Jersey Performing Arts Center hosts the James Moody Democracy of Jazz Festival.
Alvin Gilbert Cohn
was born in Brooklyn, New York. He was initially known in the 1940s for playing in Woody Herman's Second Herd as one of the Four Brothers, along with Zoot Sims, Stan Getz, and Serge Chaloff. Unlike the better-known tenors Sims and Getz, Cohn contributed arrangements to the Herman band. Cohn had a reputation as a lyrical flowing soloist.
After leaving the Herman group Cohn went on to play with a variety of other musicians, but his best-known association was his long-term partnership with fellow Herman veteran tenor player Sims, beginning with the quintet they co-led in 1956. They continued to play together sporadically until the death of Sims. The high point of their recorded output can be found on You 'n' Me, a collection of standards and original compositions released on Mercury Records in 1960. The two also played on some of author Jack Kerouac's recordings. The rhythm section on their 1950s recordings included Mose Allison on piano.
In addition to his work as a jazz tenor saxophonist, Cohn was an arranger. His work included the Broadway productions of Raisin' and Sophisticated Ladies. Also, Cohn did arrangements for unreleased Linda Ronstadt recordings from the 1980s.
Cohn also appeared on stage with Elvis Presley in June, 1972, as a member of the Joe Malin Orchestra at Madison Square Garden.
Al Cohn died of liver cancer in Stroudsburg, Pennsylvania in 1988.
Cohn's first wife was singer Marilyn Moore. His son, Joe Cohn, is a jazz guitar player. Granddaughter Shaye Cohn, Joe's daughter, is a musician who plays cornet with her band Tuba Skinny in New Orleans and at jazz festivals in Italy and Australia and elsewhere. Shaye also plays accordion, violin and piano. Al Cohn was also briefly married to singer Mary Ann McCall.