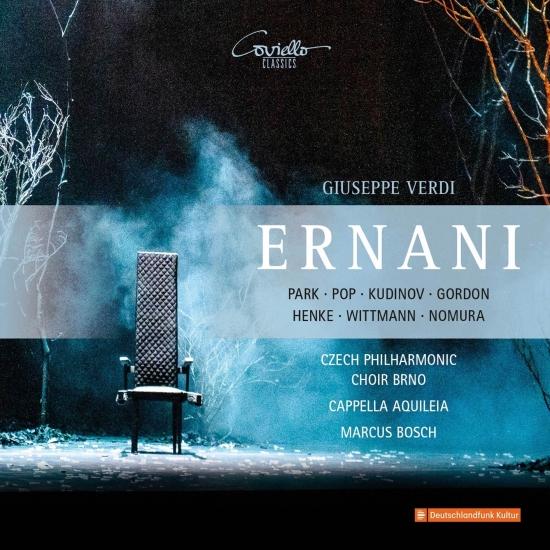 Intense music drama: Verdi wanted to put a “grandiose and yet passionate libretto” into music. His first setting to a drama by Victor Hugo (Hernani ou l’honneur castillan), was composed in 1843, fascinated by the close integration of the formerly individual “numbers” into a structural unit and the further perfected depth of the figure drawing – including its relentless destruction at the end. However, Ernani is not one of the really big hits like Nabucco or La Traviata – like the other three early Verdi operas published by Marcus Bosch and the Cappella Aquileia in recent years. There is a method behind it: Bosch shows that even the supposedly somewhat weaker works by the great opera genius have their own special charms. In the case of Ernani, this is again extremely convincing: Marcus Bosch, the Czech Philharmonic Choir Brno and the Cappella Aquileia, together with a handpicked ensemble of singers, turn the first large piece of world-famous music by Verdi’s pen into an intense music-drama experience with proven precision.
"Marcus Bosch, the Czech Philharmonic Choir Brno and the Cappella Aquileia, together with a hand-picked ensemble of singers, make the first great piece of world literature set to music by Verdi's pen an intense musical-dramatic experience" [CLASS GROANS]
Sung Kyu Park, tenor
Marian Pop, baritone
Pavel Kudinov, bass
Leah Gordon, soprano
Stephanie Henke, soprano
Christoph Wittmann, tenor
Lancelot Nomura, bass
Czech Philharmonic Choir of Brno
Cappella Aquileia
Marcus Bosch, conductor 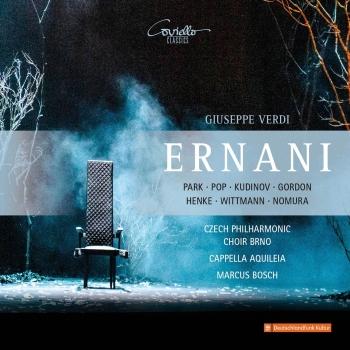 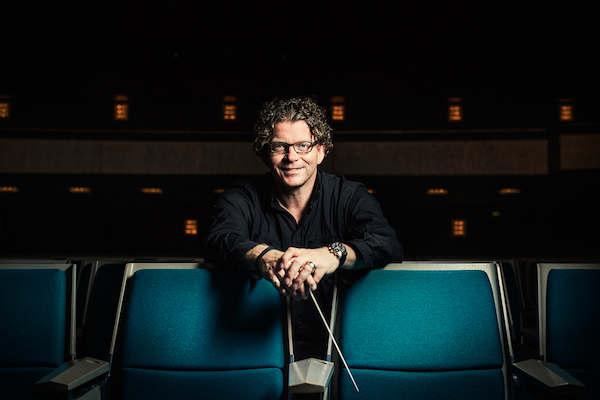 Marcus Bosch
is one of the most prominent figures in the German conducting scene – and a much-sought-after guest conductor across the world. This German artist of Brazilian-Italian descent decided early on to embark on the kapellmeister career path followed by many conductors in Germany: after positions at the state theatres in Wiesbaden and Saarbrücken and with the Staatsorchester Halle, he was general music director (GMD) of the City of Aachen from 2002 to 2012 and at the Staatstheater and Staatsphilharmonie in Nuremberg from 2011 to 2018. His operatic repertoire now includes more than 90 works of music theatre, among them large-scale projects such as Wagner's Ring cycle and Berlioz's Les Troyens. He succeeded in putting the Sinfonieorchester Aachen – once led by conducting greats such as Herbert von Karajan and Wolfgang Sawallisch – back on the international classical music map with live CD recordings of symphonies by Anton Bruckner. “An exciting listening experience” was the opinion of the Kulturspiegel magazine, while broadcaster WDR noted that the Aachen cycle did not need “to fear any prominent names”. The Brahms recordings with the Aachen orchestra also bear witness to the outstanding quality Bosch achieved with the ensemble.
Bosch succeeded in pulling off a similar feat in Nuremberg with a recording of the nine symphonies and the symphonic poems of Dvorák. This cycle was hailed by critics as displaying a “wonderful storytelling approach”. Klassik.com even spoke of a “lucky find for all Dvorák fans”.
In 2010, Marcus Bosch took over as artistic director of the time-honoured Heidenheim Opera Festival. Under his leadership, the event evolved into an internationally renowned operatic showcase, not least because of the orchestra of the Heidenheim Opera Festival, the Cappella Aquileia, an ensemble of top-flight musicians that was founded at Marcus Bosch's initiative.
This “aural seducer”, as the radio station Deutschlandfunk Kultur has called him, tends anyway to take new, innovative paths and to come up with novel formats for concerts and events. In 2008, he conducted the first internationally freely accessible live internet broadcast (“Salome” in Aachen) and the first operatic première to ever be shown as a live broadcast in cinemas (“Tristan und Isolde” in Nuremberg). He also conducted the biggest classical music event in Europe, Klassik Open Air in Nuremberg, several times.
In 2016, a new phase of his career began. As a full professor at the University of Music and Performing Arts Munich (HMTM), he passes on his knowledge and experience to aspiring young conductors. But Marcus Bosch is still nonetheless active as a guest conductor, recently performing with the Leipzig Gewandhausorchester, at the Deutsche Oper Berlin, at the Cologne Opera and at the Hamburg State Opera, among other venues. He has now conducted more than 100 orchestras across the world. This season will take him to places including Vienna, Milan, Parma, Palermo and Qatar. Curious and open-minded, he cultivates a very wide range of symphonic and operatic repertoire. He has been in charge of numerous premières and worked together with such influential directors as Peter Konwitschny, Calixto Bieito and Stéphane Braunschweig.
In 2018, he also took on artistic responsibility for the Norddeutsche Philharmonie Rostock as conductor-in-residence. He holds the position of principal guest conductor with the Südwestdeutsche Philharmonie in Konstanz.
His credentials as a team player are also shown by his initiative in creating an exchange forum for German general music directors: Marcus Bosch is the chair of the German GMD-Konferenz.