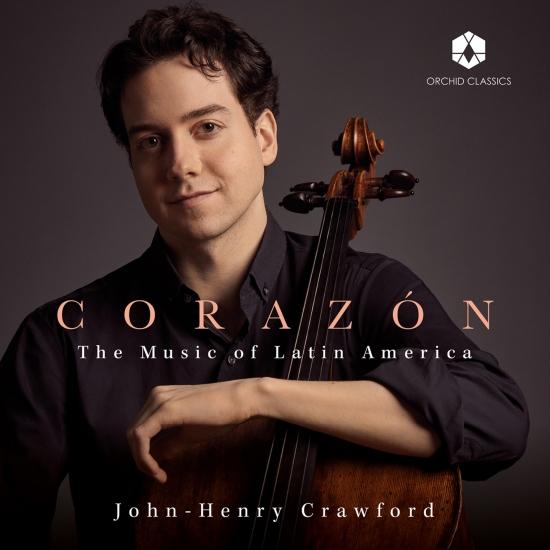 The American cellist John-Henry Crawford releases his second album, entitled "CORAZÓN: The Music of Latin America." Released by Orchid Classics, it travels through 140 years' worth of Latin-American music, highlighting works from Argentina, Cuba, Brazil, and Mexico. Composers featured include Leo Brouwer, Heitor Villa-Lobos, Carlos Guastavino, Manuel Ponce, Egberto Gismonti, and Astor Piazzolla.
The album follows Crawford's first album, "Dialogo", which was also recorded with pianist Victor Santiago Asunción. While that disc focused on more standard cello repertoire (featuring sonatas by Brahms, Ligeti, and Shostakovich), on "CORAZÓN" Crawford has clearly become at home with Latin-American repertoire. Alongside the cello-piano works, he also explores music for cello and guitar with the South Korean guitarist Jiji.
"In the summer of 2019, I traveled to Mexico to compete in the IX International Carlos Prieto Cello Competition, and little did I know, the trip would transform my life musically," writes Crawford of the inspiration behind the album.
"At the time I was very well acquainted with Latin American music, but after having the great fortune of winning first prize and returning to Mexico multiple times for performances, I fell in love with the music of Latin America, the culture, the history, and the Spanish language. As the [album's] title suggests, this music pulls at the heartstrings and exudes romance and passion."
John-Henry Crawford, cello
Victor Santiago Asuncion, piano 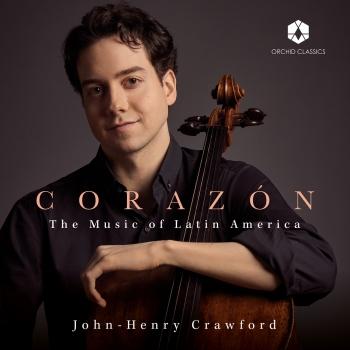 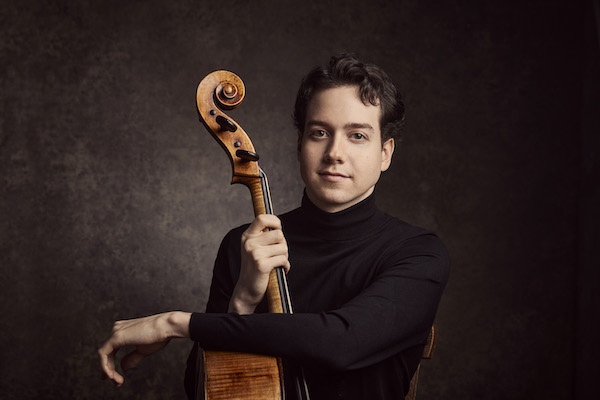 John-Henry Crawford
Born in the small Louisiana city of Shreveport, cellist John-Henry Crawford has been lauded for his “polished charisma” and “singing sound” (Philadelphia Inquirer) and in 2019 was First Prize Winner of the IX International Carlos Prieto Cello Competition and named Young Artist of the Year by the Classical Recording Foundation.
At age 15, Crawford was accepted into the legendary Curtis Institute of Music to study with Peter Wiley and Carter Brey and went on to complete an Artist Diploma at the Manhattan School of Music with Philippe Muller, a Master of Music at The Juilliard School with Joel Krosnick, and pursue further study in Chicago with Hans Jørgen Jensen. He has given concerts in 25 states as well as Brazil, Canada, Costa Rica, France, Germany, Mexico, and Switzerland at venues such as The International Concert Series of the Louvre in Paris, Volkswagen’s Die Gläsern Manufaktur in Dresden, and the inaugural season of the Tippet Rise Arts Center in Montana. Crawford gave his solo debut with the Philadelphia Orchestra as First Prize Winner of the orchestra’s Greenfield Competition and has performed Beethoven Triple Concerto with the Memphis Symphony, Dvorak and Gulda Cello Concertos with the Shreveport Symphony, and Haydn’s C Major Cello Concerto with the Highland Park Strings.
While in Chicago, Crawford appeared on WFMT’s Impromptu series and toured extensively with Steinway artist and pianist Victor Santiago Asuncion. He has appeared twice with Christopher O’Riley on National Public Radio’s From the Top. An advocate for the importance of social media, Crawford commands a strong Instagram presence, attracting tens of thousands of viewers to his project #The1000DayJourney, where he films artistic cinematic videos daily from his practice and performances for over 55,000 followers (@cellocrawford) to give a glimpse into the working process of a musician, recently passing the 1000-day mark.
Crawford’s numerous competition prizes also include Grand Prize and First Prize Cellist at the 2015 American String Teachers National Solo Competition, the Lynn Harrell Competition of the Dallas Symphony, the Hudson Valley Competition, and the Kingsville International Competition. He has competed in the Tchaikovsky and Queen Elisabeth competitions and was accepted at the prestigious Verbier Academy in Switzerland for study under the tutelage of Ralph Kirshbaum and Torleif Thedeen.
Crawford has been a fellow at Music from Angel Fire in New Mexico, the National Arts Centre’s Zukerman Young Artist Program in Canada, The Fontainebleau School in France, and the Perlman Chamber Music Program. He was invited to perform at Boston’s French Cultural Museum in a chamber music concert with Boston Symphony concertmaster Malcolm Lowe, Curtis President Roberto Diaz, and members of the Borromeo Quartet, and was the only student performer on a tour series to Costa Rica, Mexico, and Brazil, collaborating with artists Soovin Kim, Roberto Diaz, and Jason Vieaux as part of Curtis on Tour. While a student at Curtis, Crawford’s recital performances were broadcast on WHYY public television in Philadelphia. He was interviewed for the recently released documentary Maestro about conductor Paavo Järvi, and is also interviewed and quoted in Dan Coyle’s The Talent Code by Dan Coyle, a best-selling book about the science and neurology behind skill development.
Crawford is from a musical family and performs on a rare 200-year old European cello smuggled out of Austria by his grandfather, Dr. Robert Popper, who evaded Kristallnacht in 1938. He also performs on a fine French bow by the revolutionary bowmaker Tourte “L’Ainé” from 1790. Before attending Curtis, Crawford studied with concert cellist Andres Diaz of Southern Methodist University. In addition to music, he enjoys reading about astrophysics, running, performing magic tricks, and photography.