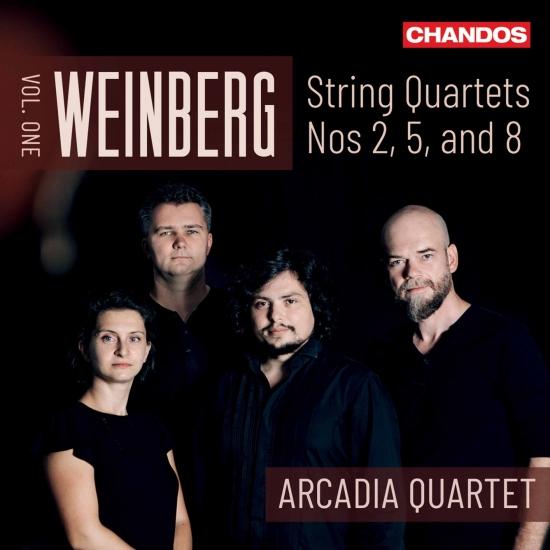 The seventeen string quartets of Weinberg span nearly half a century, from his student days in Warsaw to the end of his career in Moscow, and show his development as a composer more clearly than his work in any other genre. The Second Quartet, composed in 1939 – 40 whilst studying in Minsk, was dedicated to his mother and sister, who he would later learn had not survived the German invasion of Poland. Quartet No. 5, of 1945, was the first in which he added titles to each movement, and reflects the influence of Shostakovich over the young composer. The final quartet in this programme – No. 8 – was written in 1959 and dedicated to the Borodin Quartet. For many years the best-known of Weinberg’s quartets in the west, this single-movement work is divided into three sections with a coda. The Arcadia Quartet is a passionate advocate for these quartets, writing: ‘[Weinberg’s] music is like a glow of light surrounded by the darkness of the unknown, and it quickly became a goal of ours to attempt to dilute these shadows. With every recording and every live performance of his music, we intend to shine some light on this wide-ranging, profound phenomenon, which has remained overlooked for so long, and we hope that, with time, Mieczysław Weinberg will take his rightful place in the history of music.’
Arcadia Quartet 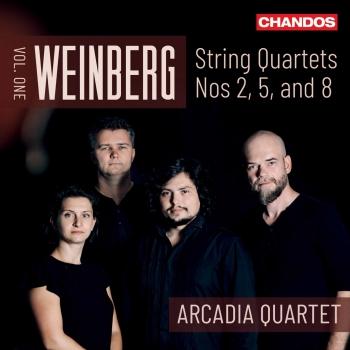 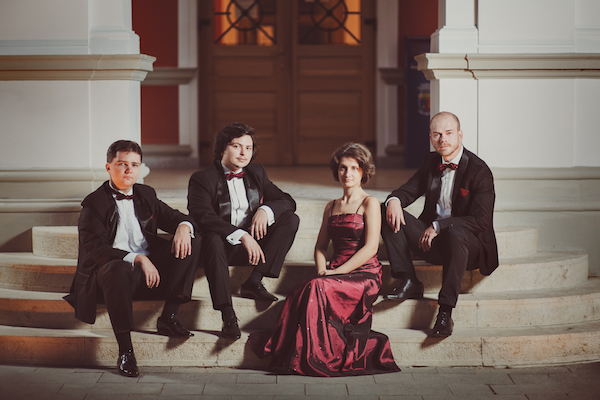 Arcadia Quartet
Winners of the 2014 Osaka International Chamber Music Competition, the 2012 Wigmore Hall London International String Quartet Competition, the 2011 Almere International Chamber Music Competition in 2011 and the International Chamber Music Competition Hamburg in 2009, the Arcadia Quartet is rapidly establishing itself as one of the most exciting string quartets of their generation.
Formed in 2006 while students at the Gheorghe Dima Music Academy in Romania, the quartet finished their postgraduate studies at the University of Music and Performing Arts Vienna, and became the Alumni members of the European Chamber Music Academy, while they have performed across the world including performances at the Budapest Spring Festival, the International George Enescu Festival (Bucharest), Cité international des arts (Paris), Alte Oper Frankfurt, Pollack Hall (Montreal), The Royal Concertgebouw (Amsterdam), Wigmore Hall (London), Suntory Hall (Tokyo), Izumi Hall (Osaka), Musikverein (Vienna), Aldeburgh Festival, Konzerthaus Berlin, North Norfolk Music Festival, Romanian Athenaeum, Q’arto Mondi Festival (Poznań), Salle Gaveau (Paris), Festspiele Mecklenburg-Vorpommern, Kammermusiktage Mettlach, Zeist Music Days Festival in The Netherlands, throughout the United Kingdom, in Portugal, in Tel-Aviv and in Beijing. The Quartet made their BBC Radio 3 debut with a broadcast concert from the Wigmore Hall in March 2015, and in April 2015 were invited to become the Quartet-in-Residence at the prestigious Tinerimea Română National Art Centre in Bucharest, playing six concerts a year broadcast by the Romanian Broadcasting Company. Over the years the Quartet have collaborated with many internationally renown artists such as Marin Cazacu, Diana Ligeti, Amit Peled, Remus Azoiței, Sarah Chang, Robert Levin, János Bálint, Seiya Ueno, Ad Libitum Quartet, Con Tempo Quartet, Belcea Quartet, etc.
The Arcadia Quartet’s debut disc of works by Mendelssohn and Brahms was released by Fontenay Classics in 2009 attracting critical acclaim. Ensemble Magazin wrote of ‘their intimate performance’, ‘their exceptional sonority’ and their ‘expressive power which leaves a deep impression on the listener’. Their recording of Janáček Quartet No. 1 and No. 2 was released on the label Orchid Classics in October 2013. The Sunday Times wrote of ‘a beauty that pierces the heart’, and that ‘both works are played with searing intensity by the fine young Romanian quartet’. The Financial Times wrote that the quartet ‘create a mood of edgy expressionism that, in its violent swings and chromatic stresses, is shockingly direct and dramatic, like an opera – or a nightmare’, that ‘the result is an assault on the senses, piercing the heart of this unsettling music’.
The Arcadia Quartet started collaborating with Chandos Records in September 2017, launching an album containing the complete Bartók string quartets. This double CD comes with commendatory reviews from the most esteemed professional publications of the world and with 5 star reviews in the magazines Diapason and Classica. The album was named Disc of the Week by BBC Radio 3, one of the best albums of October 2018 by WQXR-FM in New York, and Disc of the Month by Classica magazine in January 2019.
An extraordinary new project is on the way with Chandos Records: the recording of all 17 string quartets of Mieczysław Weinberg. This set of 6 CDs will be launched in the following 5 years.
"The Romanian ensemble lives through the emotional eruptions in Janáček’s music with heart and soul ... every accent is a stich into the heart." Marcus Stäbler, Fono Forum, April 2014
“the playing has such intensity....The result is an assault on the senses, piercing the heart of this unsettling music” The Financial Times, September 2013