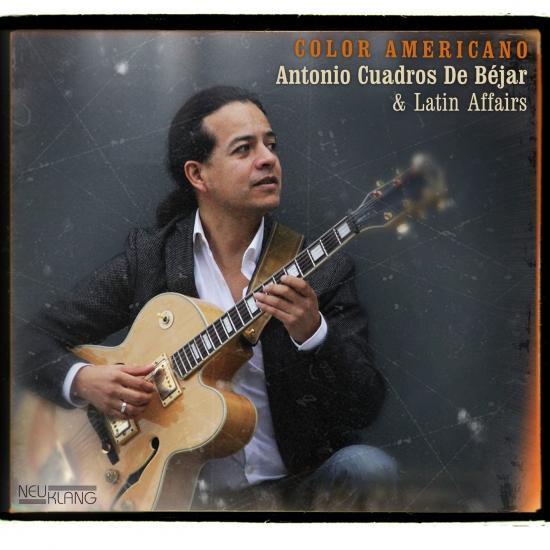 „Color Americano“ tells about Antonio Cuadros de Béjar‘s journey, which led him across the American continent and further to the Europe. A journey on which the most precious and valuable thing he was carrying with him was an antique, musical heritage. A musical, artistic journey which enriched him with so many different styles and traditions. While giving rhythms, melodies and poems from the Andes to listeners from a dozen different countries Antonio Cuadros De Béjar was enchanted by the musical forms of expression which broaden his musical vocabulary and the tunes from the Andes’ Altiplano. This way he was able to overwhelmingly extend his artistic universe without neglecting his cultural heritage. With Latin Affairs he has found first-class musicians to accompany him on this musical journey the biggest commitment and passion possible.
„A formidable 4tet surrounds Antonio Cuadros De Bejar as he delivers the cultural by product of his own experience with Color Americano. Latin flair with the contemporary colors and straight ahead swing. Antonio's instrumental style is that harmonic sweet spot somewhere between George Benson and Pat Martino. Smoldering Latin rhythms move effortless below the surface as an A list selection of guests including vocalist Barbara Burkle enhance the texture of a truly unique release. Antonio's cultural heritage if from the Andes' Altiplano or high plain of Bolivia which is a rarity for most western aficionados. This seldom heard yet incredibly significant portion of Latin music is transformed thanks to the forward thinking vision of Antonio with an end result that is fresh, vibrant and loaded with endless crossover possibilities.
Antonio Cuadros De Bejar found his artistic road less traveled take him to Europe, Color Americano may just bring him to the American audience! Part of the new breed of Latin players embracing a global audience.
The perfect fusion of Latin, contemporary and straight ahead jazz, Antonio Cuadros de Bejar has found the perfect hybrid! (Brent Black, www.criticaljazz.com)
Antonio Cuadros De Béjar, guitar, charango, vocals
Hector Martignon, piano, accordion
Markus Braun, double bass
Daniel Messina, drums, bombo
Guests:
Joe Gallardo, trombone
Arno Haas, saxophone
Lothar Schmitz, guitar
Barbara Bürkle, vocals
Rolando Daza, quena, zampoña flute
Christos Rafalides, vibraphone
John Walsh, trumpet
Mauricio Herrera, percussion

Antonio Cuadros De Béjar
Folk music stands at the beginning of the Bolivian jazz guitarist’s career. He is playing numerous concerts with experienced musicians of his home country before leaving for a five-year long tour throughout Europe.
Antonio Cuadros de Béjar is travelling through Germany, the Czech Republic, Belgium, Italy, France, Luxemburg and the Netherlands. During many concerts, radio and TV appearances he is gaining a lot of experience.
In 1995 he settles down in Germany.
Here he starts playing jazz concerts and engages himself entirely in jazz and Latin jazz. 1999 he finishes his studies with specialisation in arrangement in Munich. He plays more and more self-compositions and loves to arrange pieces for international artists.
2004 he is combining jazz with his native rhythms. Since this time he is regularly inviting Latin American artists to tour Europe together with local artists.
Since 2005 Cuadros de Béjar is giving workshops in harmonics, ear training and arrangement throughout Germany.
Besides his Engagements as a jazz musician he is also organising concerts to present known artists as well as newcomer.