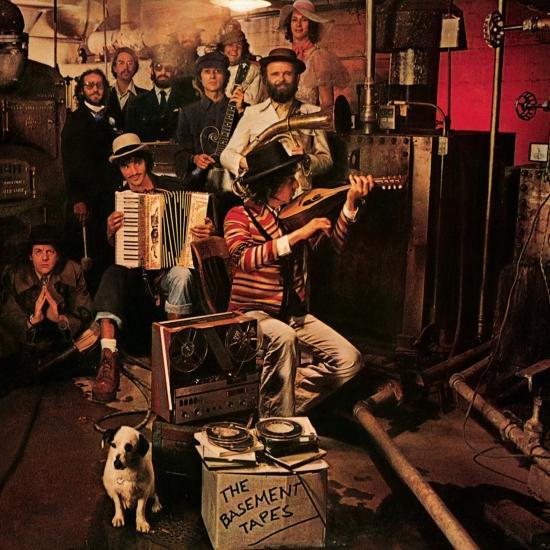 Info for The Basement Tapes

In 1967 Bob Dylan was recovering from his much-publicized motorcycle crash. To emphasize Dylan's startling fecundity, he laid down dozens of rudimentary demo recordings with backing from the fledgling Band. Eventually gaining an official release eight years later (with several delightful songs from a later Band session added), „The Basement Tapes“ is a ragbag collection of alternately playful and serious acoustic-based songs that draw on a deep well of American tradition for their inspiration. Songs of the calibre of 'Tears Of Rage', 'Nothing Was Delivered' and 'This Wheel's On Fire' on this ostensibly tossed-off masterpiece only serve to further underline Dylan's importance as a writer.
„The official release of The Basement Tapes -- which were first heard on a 1968 bootleg called The Great White Wonder -- plays with history somewhat, as Robbie Robertson overemphasizes the Band's status in the sessions, making them out to be equally active to Dylan, adding in demos not cut at the sessions and overdubbing their recordings to flesh them out. As many bootlegs (most notably the complete five-disc series) reveal, this isn't entirely true and the Band were nowhere near as active as Dylan, but that ultimately is a bit like nitpicking, since the music here (including the Band's) is astonishingly good. The party line on The Basement Tapes is that it is Americana, as Dylan and the Band pick up the weirdness inherent in old folk, country, and blues tunes, but it transcends mere historical arcana through its lively, humorous, full-bodied performances. Dylan never sounded as loose, nor was he ever as funny as he is here, and this positively revels in its weird, wild character. For all the apparent antecedents -- and the allusions are sly and obvious in equal measure -- this is truly Dylan's show, as he majestically evokes old myths and creates new ones, resulting in a crazy quilt of blues, humor, folk, tall tales, inside jokes, and rock. The Band pretty much pick up where Dylan left off, even singing a couple of his tunes, but they play it a little straight, on both their rockers and ballads. Not a bad thing at all, since this actually winds up providing context for the wild, mercurial brilliance of Dylan's work -- and, taken together, the results (especially in this judiciously compiled form with its expert song selection, even if there's a bit too much Band) rank among the greatest American music ever made.“ (Stephen Thomas Erlewine, AMG)
Bob Dylan, acoustic guitar, piano, vocals
Rick Danko, bass, mandolin, vocals
Levon Helm, drums, mandolin, bass, vocals
Garth Hudson, organ, clavinet, accordion, tenor saxophone, piano
Richard Manuel, piano, drums, harmonica, vocals
Robbie Robertson, electric guitar, acoustic guitar, drums, vocals
Recorded between June and October 1967 in the basement of the Big Pink, West Saugerties, New York
Engineered by Garth Hudson, Mark Aglietti
Produced by Bob Dylan, the Band
Digitally remastered