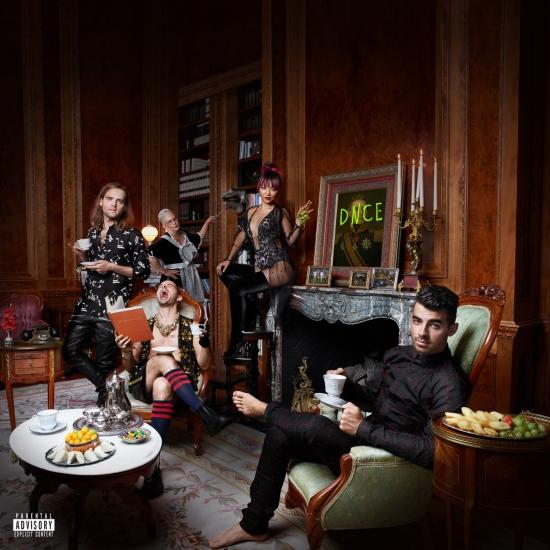 2016 has been a breakthrough year for the band. They just snagged an MTV Video Music Award in the category of Best New Artist, and their smash single Cake By The Ocean achieved an RIAA double-platinum certification. It also stands out as one of the most played songs at radio this year. The band is also nominated for two MTV European Music Awards, including "Best New Artist."
DNCE has also become a powerful presence on stage. They just wrapped up a string of North American tour dates alongside Selena Gomez in addition to worldwide dates in Europe and Asia. With a banner year under their belts, they re a band that s here to stay in a big way...
Assembled by frontman Joe Jonas in the summer of 2015, DNCE's all-star bandmates include bassist & keyboardist Cole Whittle, who co-founded the band Semi Precious Weapons, South Korean bred guitarist JinJoo, who has toured with the Jonas Brothers, Charli XCX, and CeeLoGreen, and drummer Jack Lawless, who has previously joined the Jonas Brothers, Night Terrors of 1927, and Soft Swells on the road.
„For all the things that former Jonas Brother and Disney kid Joe Jonas could have done after the breakup of his teen-centric sibling band in 2013, forming a flamboyant dance-rock and disco-ready band like DNCE was clearly one of the more unexpected, inspired, and welcome choices. Rather than just another vehicle for Jonas to package his crisp, soulful vocals and good looks (though, make no mistake, showcasing Jonas is the main directive here), DNCE feels like an organic ensemble of like-minded weirdos. Part of Jonas' pop coup d'etat was picking the right bandmates for DNCE, conscripting onetime Jonas Brothers touring musicians like the captivatingly talented South Korean guitarist JinJoo Lee (Jordin Sparks, Charli XCX, Cee Lo Green) and rock-and-funk-ready drummer Jack Lawless (Demi Lovato, Miley Cyrus), as well as swashbucklingly rococo former Semi Precious Weapons bassist/keyboardist Cole Whittle. Together, they present like a Fraggle Rock version of Maroon 5, a motley crew of club-stamped superheroes banded together to fight corporate pop boredom and mediocrity. Of course, with Jonas at the helm, they also sound a lot like another teen idol turned legit pop threat: Justin Timberlake. That said, it's a positive comparison and speaks to Jonas' continued maturation from the flat-ironed mullet of his Camp Rock days to his saucy, dyed-blonde pomp and swagger in DNCE. It's a process the public first glimpsed on his unabashedly pop-friendly 2011 solo debut, Fastlife, and one he takes to fruition here. Working with a handful of in-demand yet still savvily hip production luminaries including Sir Nolan, Ilya, and Mattman & Robin, as well as Semi Precious Weapons frontman turned pop songwriting giant Justin Tranter, Jonas and DNCE have crafted an album of buoyant, dance-oriented pop that straddles the lines between '80s-style new wave dance-rock ("Naked"), groove-oriented '70s disco-soul ("Be Mean"), and Sugar Ray-esque '90s alt-pop mélange ("Good Day"). Cuts like the euphorically catchy "Body Moves," the equally hooky "Toothbrush," and the ubiquitous 2015 hit single "Cake by the Ocean" are legit party anthems, steeped in twentysomething sexual longing and laddish confidence that make the album more than worthy of the one-drink minimum. Surprisingly, Jonas even makes room for several heartfelt, earnestly delivered ballads including "Almost" and falsetto-heavy "Truthfully," which sounds something like British boy band Take That doing an off-the-cuff cover of Extreme's "More Than Words." It's just that sort of stylistically open-minded approach to pop that makes DNCE such a joyous and undeniably fun album. Jonas has developed into a deeply self-aware and confident performer whose brightly hued and clever musical taste is on display throughout DNCE. Ultimately, if Joe Jonas grew up spending his adolescence plastered across the walls of teen pop fans worldwide, then, like it or not, DNCE is just the kind of album to put him back on the walls of those same fans who've grown up with him.“ (Matt Collar, AMG)