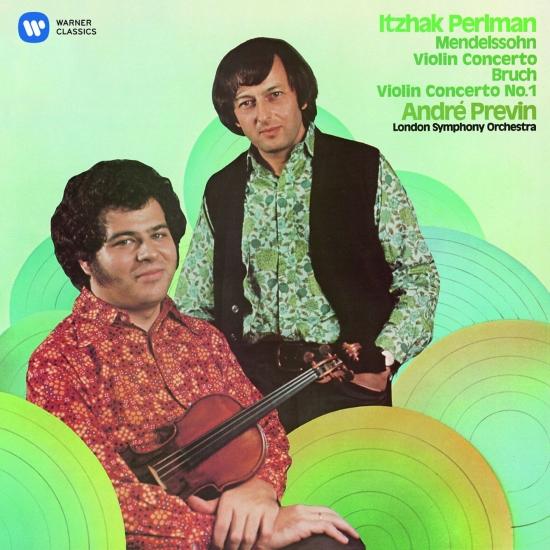 More than a decade after his first recording of the Mendelssohn and Bruch concertos, Perlman returned to them with Bernard Haitink and the Royal Concertgebouw Orchestra, bringing new insights and an even more acute feeling for their Romantic contrasts and drama.
„Anyone who wants to understand why Itzhak Perlman has reached such a dominating position among violin-players might listen to Perlman’s recording, made on June 24–25, 1983, of Mendelssohn’s Concerto. Through the first movement’s cadenza, it seems amiable, virtuosic, and aggressive enough, but during the recapitulation, Perlman begins to feel his oats, stretching phrases with the impunity—and almost with the tonal opulence—of Mischa Elman. But this heartfelt playing remains chaste enough to please listeners who might have scoffed at his illustrious forebear. Just this section alone, even without the second movement’s more controlled expression and the finale’s ebullient sparkle (even if not so bright as Heifetz’s), would make the release worth acquiring. Haitink and the orchestra follow close on Perlman’s heels during his inspired digressions; and although the violin sounds a bit far forward (and hardly so lush in live appearances), the digital recording offers rich detail.
Perlman and Haitink recorded Bruch’s First Concerto during the same session. Perlman played more expansively than urgently in the first measures of the Vorspiel, but he’s by turns importunate, pleading—and urgent—during the movement proper. In the second movement, he recalls both Stern’s expressive performance from 1956 (which I always preferred to the stereo one from 1966) and the freedom of expression in the first movement of Mendelssohn’s Concerto, all with affecting tenderness. The finale’s appropriately commanding, full of sound and fury signifying, in this case, much more than nothing.
Perlman’s reading with Lopez-Cobos from February 27–28, 1976, captured in three-dimensional analog sound, may seem, in its first movement, not to register the same soaring excitement and tensile strength as Heifetz’s, which set a very high standard; but, as in the other concertos in the program, Perlman breaks loose on occasion: in this less frequently played concerto, that occurs strikingly in the recitative-like transition to the first movement’s recapitulation, as well as in the second, recitative-like movement as a whole, which he plays with an authority arguably the equal of Heifetz’s, but with superior tonal splendor, and finally in the finale’s lyrical passages.
Perlman certainly shows himself, at least in select passages scattered throughout these performances, to be an interpreter at the level of the greatest violinists of the past. For these moments alone, the program demands an urgent recommendation.“ (Robert Maxham, FanFare)
“These are strong and purposeful readings of the Mendelssohn and Bruch First Concertos, which Itzhak Perlman plays with brilliance, ease and assurance. The recording of the Bruch Second Concerto is of the very highest quality, enjoyable and superbly played.” (Gramophone Magazine)
“Perlman's playing of both the Bruch G minor and the Mendelssohn blossoms, doing justice both to the flashy virtuoso moments and the introspective pages. Haitink, too, eventually settles down to serve up full-bodied orchestral backings” (MusicWeb International)
Itzhak Perlman, violin
Royal Concertgebouw Orchestra (Bruch Violin Concerto)
Bernard Haitink, conductor
New Philharmonia Orchestra (Mendelssohn Violin Concerto)
Jesús Lopez-Cobos, conductor
Digitally remastered 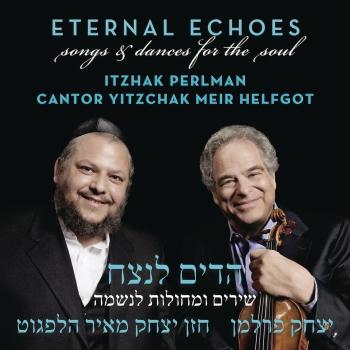 Eternal Echoes: Songs and Dances for the Soul

Itzhak Perlman
Born in 1945 in Tel Aviv, Itzhak Perlman began playing the violin when he was so small that all he could hold was a toy fiddle. Although he was disabled by polio at age 4, he played his first recital by age 10. He studied at the Juilliard School with Dorothy DeLay and Ivan Galamian and made his Carnegie Hall debut in 1963. He was introduced to a wider American public via multiple appearances on the Ed Sullivan Show, including a 1964 episode that also featured the Rolling Stones. After winning the prestigious Leventritt Competition the same year, Perlman went on to a career as a soloist that has seen him appear to acclaim on all the world’s great stages and make hundreds of recordings.
His prize-winning discography not only covers the width and breadth of the great classical violin repertoire; he has also made ventures into Klezmer music and film soundtracks, including the Oscar-winning score to Schindler’s List. He received a Grammy Lifetime Achievement Award in 2008. Perlman has won four Emmy Awards, including for the 1998 PBS documentary Fiddling for the Future, about the Perlman Music Program and his work as a teacher. Having collaborated with all the world’s major orchestras as a soloist, Perlman has for years performed with many of them as a conductor. A rarity for a classical artist, he has appeared everywhere from Sesame Street to the White House including a performance for the first inaugural of President Obama. In 2000, he was awarded a National Medal of Arts, and in 2003, Perlman earned a Kennedy Center Honor celebrating his distinguished achievements and contributions to the country’s cultural and educational life. He currently holds the Dorothy Richard Starling Foundation Chair at the Juilliard School.