How The West Was Won (Remastered - Live) Led Zeppelin 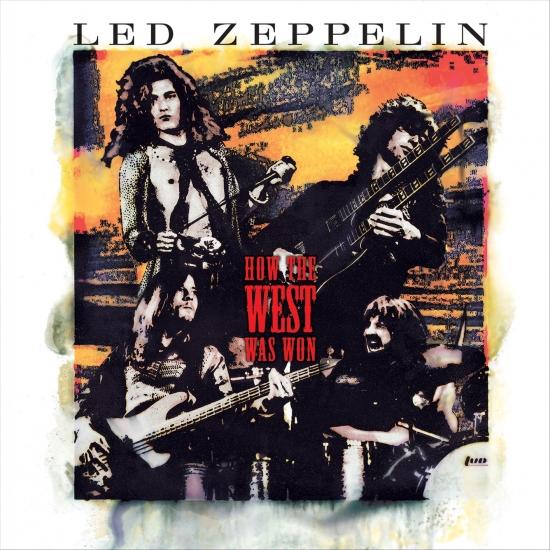 Info for How The West Was Won (Remastered - Live)

Led Zeppelin continue their reissue campaign with a new edition of their celebrated live album 'How The West Was Won', originally released in 2003, featuring newly remastered audio supervised by Jimmy Page.
How the West Was Won has been a long time coming. For a band with such an overarching legacy, the official record of Led Zeppelin's legendary--and unpredictable--live act has previously been poorly represented by the disappointing, scattershot soundtrack to The Song Remains the Same. But this triple-disc live set (culled from 1972 Long Beach/LA shows in advance of Houses of the Holy) addresses history with a vengeance, if a few decades late. These shows have rightfully assumed cult status in the bootleg market, showcasing a band at the peak of its creative and performing powers.
"The Zep faithful will welcome this belated release as evidence for enduring loyalty, but younger fans may find its diversity and dynamics even more enlightening--indeed, whole careers have since been built on the musical ideas Jimmy Page and company throw out here as decorative filler. Crucially rooted in the amped-and-hammered American blues of the guitarist's former band, the Yardbirds, the marathon work-outs of "Dazed and Confused" and "Whole Lot a Love" (which consume nearly an hour all by themselves) somehow encompass Ricky Nelson, Morocco, James Brown, Holst, Elvis Presley and Muddy Waters amidst their trademark sturm und drang, while the acoustic set that closes out Disc One showcases the band's--and particularly Robert Plant's--good-natured, crypto-Celtic folk appeal with energetic aplomb. Bigger and brasher than just about any rock act that followed in its historic wake, yet ever fan-loyal to its myriad influences, Led Zeppelin's live juggernaut finally gets the monument it deserves." (Jerry McCulley)
John Bonham, drums, percussion, backing vocals, co-lead vocals on "Bron-Yr-Aur Stomp"
John Paul Jones, bass, double bass, bass pedals, keyboards, mandolin, backing vocals
Jimmy Page, acoustic and electric guitar, mandolin, backing vocals
Robert Plant, vocals, harmonica
Recorded 25 June 1972, L.A. Forum, 27 June 1972, Long Beach Arena
Produced by Jimmy Page
Digitally remastered

An Introduction To Led Zeppelin (Remastered)

The Song Remains The Same (Remastered)

Houses Of The Holy (Standard Edition)

In Through The Out Door (Standard Edition - Remastered 2015)

In Through The Out Door (Deluxe Edition - Remastered)

LED ZEPPELIN
John Bonham, John Paul Jones, Jimmy Page and Robert Plant came together in 1968 as LED ZEPPELIN. Over the next decade, the band would become one of the most influential, innovative and successful groups in modern music, selling more than 300 million albums worldwide. Their songs are some of the most celebrated in rock 'n' roll history that, to this day, resonate with fans young and old around the globe. Still, no matter how many times you may have listened to their music, you've never heard Led Zeppelin like this before.
With the release of HighRes-Remaster editions of LED ZEPPELIN, Led Zeppelin II, and Led Zeppelin III, the band will launch an extensive reissue program of all nine of its studio albums in chronological order, each remastered by guitarist and producer Jimmy Page.
The LED ZEPPELIN legend began in January of 1969 with the group's eponymous debut. From the opening salvo of "Good Times Bad Times," on through to "Babe I'm Gonna Leave You," "Communication Breakdown," and "Dazed And Confused," the album introduced the band's unmistakable sound and left an indelible mark on the music landscape. LED ZEPPELIN has been certified diamond by the RIAA for sales over 10 million and was inducted into the Grammy® Hall of Fame in 2004.
The band wrote and recorded nearly all of Led Zeppelin II while touring relentlessly to support its debut album. Incredibly, the album was released just seven months after Led Zeppelin in October of 1969. Led Zeppelin II features some of the band's most beloved tracks including "Ramble On" and "Heartbreaker" as well as "Whole Lotta Love," considered by many to be one of the greatest rock 'n' roll songs of all time. The album is certified diamond by the RIAA with sales of over 12 million copies.
Following the whirlwind success of their first two albums and near constant touring, Page and Plant took to the now famous Bron-Yr-Aur cottage in Wales in 1970 to start the early composition of Led Zeppelin III. They later convened with Bonham and Jones for rehearsals before entering London's Olympic Studios to begin recording in May 1970. Fueled by classic tracks such as "Immigrant Song" and "Since I've Been Loving You," the album soared to the top of charts worldwide upon its release in October of 1970 and has since been certified 6x platinum.
LED ZEPPELIN continues to be honored for its pivotal role in music history. The band was inducted into the Rock & Roll Hall of Fame in 1995, received a Grammy Lifetime Achievement Award in 2005, and a year later was awarded with the Polar Music Prize in Stockholm. Founding members Jones, Page and Plant - along with Jason Bonham, the son of John Bonham - took the stage at London's O2 Arena in 2007 to headline a tribute concert for Ahmet Ertegun, a dear friend and Atlantic Records' founder. The band was honored for its lifetime contribution to American culture at the Kennedy Center Honors in 2012. In January of 2014, the band won their first ever Grammy award as Celebration Day, which captured their live performance at the Ertegun tribute concert, was named Best Rock Album