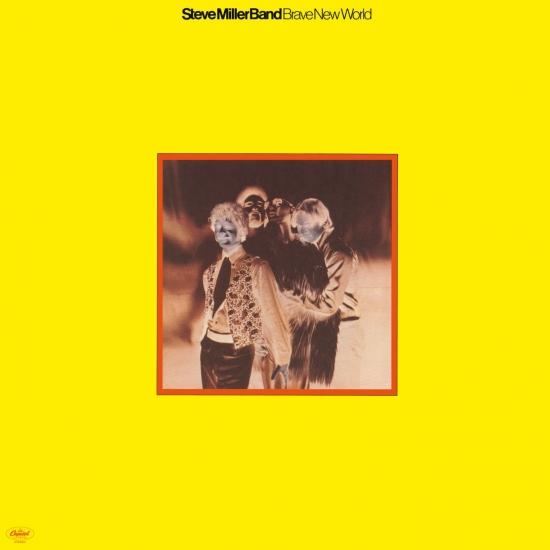 1969's "Brave New World" is the album that not only fully integrates the blues-rock stomp and hazy trippiness of "Children Of The Future" and "Sailor", but also adds a newfound pop gloss. Indeed, elements of this album would reappear throughout Miller's stratospherically successful mid-'70s commercial heyday: the slyly humorous centerpiece rocker "Space Cowboy" was name-checked on "The Joker," and the main riff of "My Dark Hour" (a studio collaboration between Miller and Paul McCartney) would later reappear as the intro to the huge hit "Fly Like An Eagle." Brave New World also benefits heavily from the contributions of famed British keyboardist Nicky Hopkins. Acid rockers like "Can't You Hear Your Daddy's Heartbeat" and "Got Love 'Cause You Need It" are wisely kept to the 2:30 mark, saving them from getting bogged down in the monotonous jamming that ruined so many albums of the period, while forward-looking experiments like the noise-rock interludes on the title track give the album a freshness that belies its recording date.
"Blasting out of stereo speakers in the summer of 1969, Brave New World was more fully realized, and rocked harder, than the Steve Miller Band's first two albums. From the opening storm of the uplifting title track to the final scorcher, "My Dark Hour," featuring Paul McCartney (credited as "Paul Ramon"), this recording was the strongest project before Miller's Fly Like an Eagle days. "Celebration Song" has a sliding bassline, while "LT's Midnight Dream" features Miller's slide guitar. "Can't You Hear Your Daddy's Heartbeat" sounds like it was lifted right off of Jimi Hendrix's Are You Experienced, and "Got Love 'Cause You Need It" also has a Hendrix-ian feel. "Kow Kow" is a wonderfully oblique song featuring Nicky Hopkins' distinctive piano style. Hopkins' piano coda on that song alone is worth the price of this album. "Space Cowboy," one of several songs co-written with Ben Sidran, defined one of Miller's many personas. "Seasons," another Sidran collaboration, is a beautifully atmospheric, slow-tempo piece. Steve Miller's guitar playing is the star of this album, blazing across the whole affair more prominently than on any other release in his lengthy career; many of the songs have a power trio feel. In addition to the fine guitar work, Miller's vocals are stronger here, and during this era in general, than they would be in his hitmaking days in the mid-'70s, when he was much more laid-back and overdubbed. Ever the borrower, adapter, and integrator, Steve Miller shapes the blues, psychedelia, sound effects, sweet multi-tracked vocal harmonies, and guitar-driven hard rock into one cohesive musical statement with this release." (Jim Newsom, AMG)
Steve Miller, guitar, lead vocals (1, 2, 4–7, 9), harmonica
Glyn Johns, guitar, backing vocals, percussion
Lonnie Turner, bass (all but 9), backing vocals, guitar
Ben Sidran, keyboards
Tim Davis, drums (all but 9), lead vocals (3, 8)
Additional musicians:
Nicky Hopkins, piano (5)
Paul McCartney (as "Paul Ramon"), drums (9), bass guitar (9), backing vocals (2,9),[5] guitar (9)