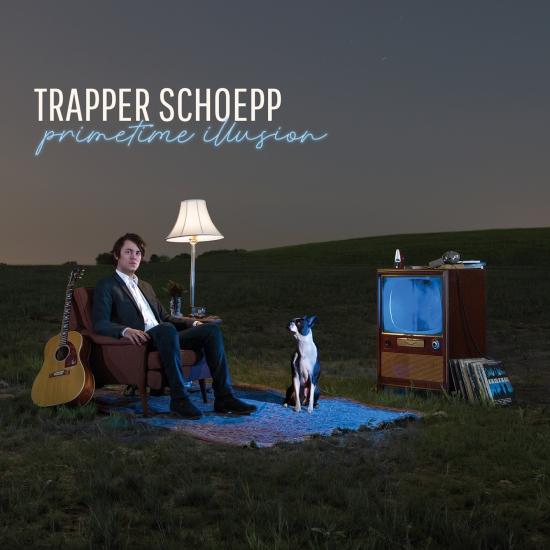 The rising Milwaukee-based troubadour’s third studio album Primetime Illusion. Produced by Wilco multi-instrumentalist Pat Sansome, the album also features a co-write with Bob Dylan on the track On, Wisconsin.
Primetime Illusion sees Schoepp reaching for his own place in the canon with a truly remarkable collection of character-driven songs and stories, a carefully etched series of sonic snapshots in which people we all know struggle to fulfill their own American dream. The album also features a co-write with Bob Dylan called, On, Wisconsin.
When time finally came to record, he reached out to Sansone, who he had met earlier that year in Chicago while supporting The Jayhawks. Impressed by the young troubadour’s “songs and commitment and enthusiasm,” Sansone sorted through the songs Schoepp had written over the past year, whittling it down to an essential 10 tunes. The multi-instrumentalist / producer provided “inspiration and Jedi-like guidance” as he helped push the project to completion.
Together, artist and producer built upon Schoepp’s newly acquired piano skills by adopting a refined and relaxed approach akin to the classic Laurel Canyon sound of the 70’s, all glittering piano, ringing guitars, and crisp vocal harmonies courtesy of Trapper’s bassist brother Tanner Schoepp. For fans of Jesse Malin, Craig Finn, Field Report, Old 97s, Frank Turner.
“I think a lot about the folk process,” he says, “how things are passed down to the next generation and are reinvented and evolve. That’s really important to me, to keep the spirit of what someone might consider old new.
“Dylan, in his MusiCares speech a few years ago, made the point that his role in music is simply extending the line. That’s my whole M.O. as well. I want to push this music forward like my life depends on it. It’s all I have.”
“Publishing a song with Bob Dylan – Bob Dylan! – “put wind in my sails."
Trapper Schoepp, vocals, guitar 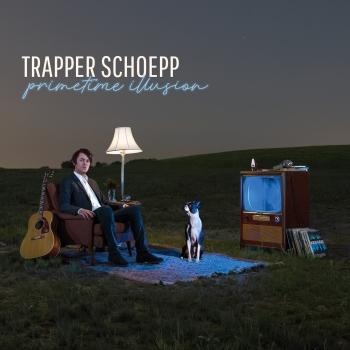 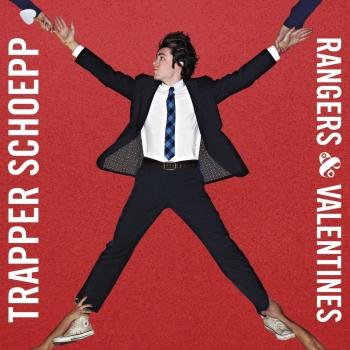 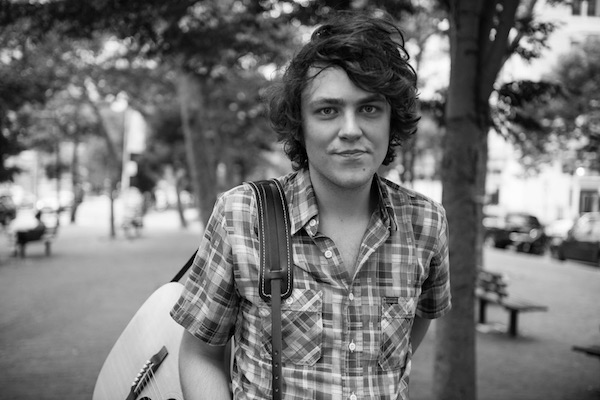 Trapper Schoepp
is a young man who’s befriended a strange and diverse cast of characters during his 24 years. That small army of rogues and rebels, drifters and dreamers, soldiers and schemers populate his songs, their tragedies and comedies, their lives and deaths recalled in his finely etched musical vignettes.
The Minnesota-born, Wisconsin-based tunesmith and teller of tales (both tall and true), returns with his second effort Rangers & Valentines (Xtra Mile Recordings). The record follows his critically acclaimed 2012 debut Run Engine, Run, with his band the Shades. That LP earned notices in Rolling Stone, American Songwriter and Paste, with the folks at Huffington Post calling him a “master storyteller” and PBS hailing his "story songs that explore and explode the conventions of rock and roll."
On Rangers & Valentines, Schoepp defies the limitations of the standard-issue Americana platter, hopping genres – you’ll hear lots of brass, backing singers and B-3 -- as the songs build to delirious musical highs. His narratives, meanwhile, find subjects in the narrow margins of society, the strange twists (literal and metaphorical) in the weather, and the vagaries of a troubadour’s transient life – with lyrics that flash a lacerating wit and humanist streak that’s at the core of his craft.
Produced by pop polymath and Raconteurs member Brendan Benson at his Readymade Studios in Nashville, the record finds Schoepp handling vocals, guitar and harmonica. He’s aided by an array of estimable musicians including his brother and musical-foil-since-birth Tanner Schoepp (providing bass guitar and vocal harmonies), Steve Selvidge (The Hold Steady), John Davis (Superdrag), the McCrary Sisters -- even comedian and WTF podcaster Marc Maron chips in on background vocals and lead guitar.
Schoepp shines up the well-worn clichés of singer-songwriterdom and renders them anew. Evoking a series of vivid protagonists and settings (fittingly, each track will have its own accompanying video, solidifying the cinematic quality of this set) his work variously recalls prime Prine (John, that is), the nuances of Newman (Randy, of course), the boozy bonhomie of The Replacements, and the unflinching language of someone well-versed in the Zevonian dialect.
Schoepp mixes fact and family lore to conjure the hardscrabble history “Ballad of Olof Johnson” and chides modern-day wannabes on “Lost Cowboy.” The road story “Ogalalla” answers the question: what happens to your mind when you’re snowbound in Nebraska with nothing but a bottle of Nyquil and The Hobbit at the local picture show for company? Meanwhile, the arch love song satire “Talking Girlfriend Blues” deftly explains how to preserve your dignity while hitchhiking to a date – and what to do when your ride turns out to have eyes for the same girl.
Elsewhere, ”Don't Go" offers a poetic post-9/11 story of love and war; while “Settlin’ or Sleepin’ Around" questions modern-day swipe right, hook up culture. Schoepp continues his affinity for songs set in hospitals with "Mono Pt. II" – which explores the kissing disease and the institutional runaround of health care in America (unfortunately a familiar subject for the young man). And he pays tribute to old friends and outsized characters with “For Jonny” (dedicated to his longtime drummer Jonny Philip) and the heart-rending requiem “Dream.”
Having released his debut on SideOneDummy, Rangers & Valentines is being put out by London-based Xtra Mile Recordings. Hipped to Schoepp’s work by fellow singer-songwriter Frank Turner, among others, Xtra Mile honcho Charlie Caplowe quickly signed him to the label.
Schoepp – who’s already crisscrossed the country sharing stages with fellow travelers like The Wallflowers, The Jayhawks and The Old 97's – will be back on the road throughout 2016 in support of Ranger & Valentines, starting with a 3-week run throughout the UK and Europe supporting Jesse Malin.