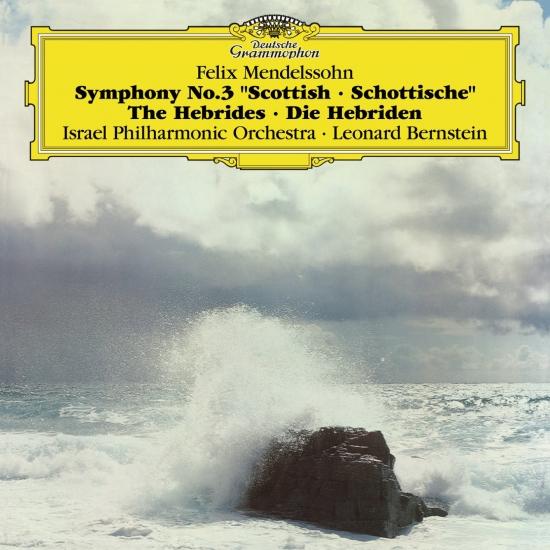 „Bernstein recorded these performances at public concerts and the first things to report are that I noticed no evidence of this in the way of audience distraction and that at medium price they are, on the whole, good value. The Italian immediately won my approval by the inclusion of the exposition repeat in the first movement. The tempo for the next one is pretty slow (this procession seems to be a very lugubrious one) but this does make for greater contrast with the following con moto moderato, while the final Saltarello comes off with great dash.
The Scottish Symphony, "the greatest of his symphonies" as John Warrack writes in an interesting note, does allow Bernstein more reasonably his propensity for slow, Romantic speeds in slowish music and the introduction is full of Romantic mists, while the following allegro only gathers pace after a short while and then often relapses when Bernstein thinks it suits the mood of the music. John Warrack emphasizes that Mendelssohn was not the facile composer he is often thought to be but was extremely self-critical and constantly rewrote his music. This point is well worth making. My only other comment on this performance of the Scottish is one I have often made before, that the final coda is not jubilant but slow—the direction at this point is allegro maestoso and conductors forget the allegro and do not seem to realize that something maestoso can be uplifting. (The best version of this I have reviewed in recent issues was under Sir Colin Davis—Orfeo S089841A, 10/84.) The overture Fingal's Cave naturally has much of the same character as the symphony.
The Reformation is the least popular of Mendelssohn's three best-known symphonies, though I suspect it means much more to any German listener, to whom the use of the Dresden Amen, the hymn Ein' feste Burg, and other themes that lie deep in the German soul will mean more than it does to us. Bernstein gives it a rather uncommitted reading, underplaying a good many points. He gets notably good soft playing from the Israel Philharmonic Orchestra and much of it is certainly passionate. The balance is not ideal, the bassoon often being much stronger than the clarinet, for instance. I found it difficult to get much enjoyment from such a routine performance but that may have been my lack of responsiveness to the music, especially to the last movement which seems to me very lacking in inspiration.“ (Gramophone)
Israel Philharmonic Orchestra
Leonard Bernstein, conductor