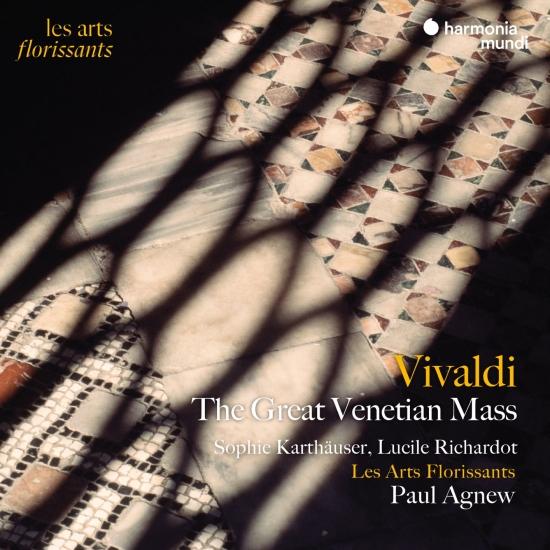 A puzzling paradox: although Vivaldi devoted over 30 years to composing for the Ospedale della Pietà in Venice, no complete musical setting of any liturgy by him has come down to us. By intercalating existing examples of his sacred music (such as the famous Gloria) and other works given a different text to suit their new liturgical function (Sanctus and Agnus Dei), the ensemble Les Arts Florissants now offers us a compelling reconstruction of a solemn Mass which the “Red-Haired Priest” might have written... for just such an assembly of exceptional soloists!
"No musical setting of the other movements of the Mass by Vivaldi survives, requiring this reconstruction to conclude with other pieces by Vivaldi retrofitted to the text of the Sanctus and Agnus dei (editions prepared by Pascal Duc). This makes perfect sense, as Vivaldi was known to cannibalize his own work in this way, as did most Baroque composers. The flowing strings of the Benedictus are particularly effective, adapted from a movement of the composer's Dixit dominus. In an apt echo of the return of the start of a cyclic mass setting at its conclusion, the final section of the Agnus dei is based on the solemn opening of the Kyrie (sadly not that zippy chromatic section of the second Kyrie). The sound, captured in 2020 in the resonant acoustic of the Église Notre-Dame-du-Liban in Paris, has a pleasing ring." (Charles T. Downey, ionarts.blogspot.com)
Sophie Karthäuser, soprano
Lucile Richardot, mezzo-soprano
Renata Pokupić, mezzo-soprano
Les Arts Florissants
Paul Agnew, direction 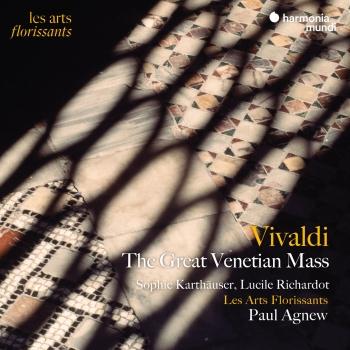 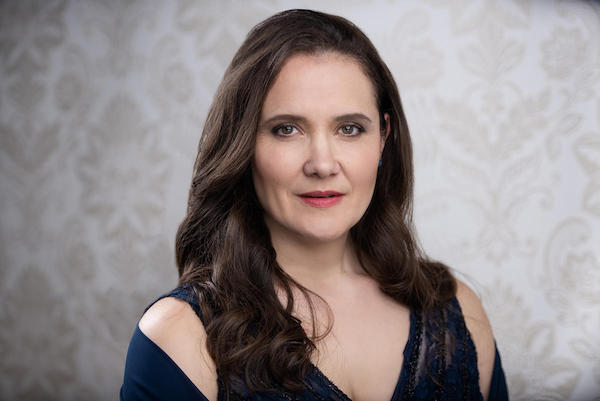 Sophie Karthäuser
Renowned worldwide as one of the finest interpreters of Mozart’s works, being called a born “Mozartian”, Sophie Karthäuser has earned such praise by singing her first ever Pamina under the baton of René Jacobs at La Monnaie and her debut Susanna led by William Christie with Opéra de Lyon. She has appeared in several other Mozart roles, such as Tamiri (Théâtre des Champs-Elysées), Sandrina (Theater an der Wien), Serpetta (Berlin Konzerthaus), Despina and Zerlina (Théâtre Royal de la Monnaie) and Ilia (Aix-en-Provence Festival, Salzburg Mozartwoche, Bremen, Théâtre des Champs-Elysées and Theater an der Wien).
Notable scenic productions include the title-role in La Calisto at the Théâtre des Champs-Elysées under Christophe Rousset as well as at La Monnaie under René Jacobs, a large scale Rameau project in Aix-en-Provence with William Christie, Charpentier’s Medée with Emmanuelle Haïm at Théâtre des Champs-Élysées and Polissena in Händel’s Radamisto at Theater an der Wien. In January and February 2015 she returned to La Monnaie with Händel’s Tamerlano with a revival in Amsterdam. March 2016 brought her back to La Monnaie as Héro in Béatrice et Bénédicte (Berlioz), a role in which she appeared also at the 2016 edition of the Glyndebourne Festival (Laurent Pelly production). Further highlights have been a production of Mozart’s Zauberflöte at the Theater an der Wien and the title role in Pelléas et Mélisande at the Teatr Wielki in Warsaw.
Ever since she won the audience price at the Wigmore Hall Song Competition, Sophie Karthäuser counts among the most coveted recitalists with appearances in Antwerp, Lille, Nantes, Paris, Strasbourg, Bordeaux, Frankfurt, at the Palais des Beaux-Arts Brussels, at the Philharmonic Halls in Berlin and Cologne as well as at New York’s Carnegie Hall and London’s Wigmore Hall, Berliner Philharmonie, Kölner Philharmonie, Brussels Palais des Beaux Arts, Frankfurt and Paris, accompanied by pianists Graham Johnson, Eugene Asti, Cédric Tiberghien and David Lively. In the past two seasons she charmed her audiences in recitals in Brussels, London, Oxford, Strasbourg, Zürich, Stuttgart, Paris, Cologne and at the Pierre Boulez Hall in Berlin.
Sophie Karthäuser is an equally sought-after concert soloist and is frequently being invited by prestigious ensembles and orchestras such as Staatskapelle Dresden, Gewandhaus Leipzig, Freiburger Barockorchester and Akademie für Alte Musik Berlin among others. Her presence on the podium on countless occasions alongside conductors such as Riccardo Chailly, Myung-Whun Chung, Nikolaus Harnoncourt, Thomas Hengelbrock, Pablo Heras-Casado, Philippe Herreweghe, René Jacobs, Louis Langrée, Ingo Metzmacher, Marc Minkowski, Kent Nagano, Kazushi Ono, Jérémie Rohrer and Christophe Rousset give testimony to her outstanding artistry.
Season 2018-2019 started for Sophie Karthäuser with Pamina in Mozart´s Zauberflöte at La Monnaie in Brussels under the baton of Antonello Manacorda and the direction of Romeo Castellucci. Further Highlights were the world premiere of Annelies van Parys´ A War Requiem with the Belgian National Orchestra, Händel´s Dixit Dominus and Salve Regina with the Trondheim Symphony Orchestra and Paul Agnew, French arias with Concert de la Loge in Caen, Metz and Paris, Leçons de Ténèbres with Ensemble Correspondances and Sébastien Daucé, Mendelssohn´s Elias with Concentus Musicus and Stefan Gottfried in Vienna as well as Mozart-Arias with the B’Rock Orchestra and concerts with Mozart’s Le Nozze di Figaro with René Jacobs in Granada, where she could be heard as Contessa.
In addition to numerous recitals, the 2019-2020 will bring Händel’s Delirio Amoroso on tour through Asia with AKAMUS, French Opera Arias with the Ensemble Concert de la Loge in Paris, Beethoven’s Ah! Perfido in Palermo, Bach’s Christmas-Oratorio in Göteborg, Beethoven’s IX. Symphony in Helsinki and Pergolesi’s Stabat Mater in Grafenegg. Further Highlights include a Vivaldi-programme on tour with Les Arts Florissants in France and Germany. With rarely performed works by Mendelssohn and Weber she can be heard together with the renowned choir accentus, the Insula Orchestra and Laurence Equilbey in Aix-en-Provence, Paris, Dortmund and on tour through Asia.
Sophie Karthäuser´s recordings include a solo album of Grétry arias (awarded with Diapason découverte), Haydn’s Il Ritorno di Tobia with Andreas Spering (Jahrespreis der deutschen Schallplattenkritik), Mozart’s complete songs (Cypres), Mozart arias with Kazushi Ono at La Monnaie (Cypres), Händel’s Faramondo (Grand Prix de l’Académie Charles Cros), Mozart’s La Finta Giardinera with René Jacobs (Harmonia Mundi), Haydn´s Creation with William Christie, Pergolesi’s Septem Verba with René Jacobs (Harmonia Mundi) as well as a solo album of french songs (“Green”) inspired by Verlaine with Cédric Tiberghien (Cypres). Her recording of Poulenc songs together with pianist Eugene Asti (Harmonia Mundi) as well as Händel’s Orlando (Archiv) were released in 2014. Her CD of Lalande´s Leçons de Ténèbres (Hamonia Mundi, 2015) with the Ensemble Correspondances and Sébastien Daucé, highly acclaimed by the press, appeared in March 2015 and was awarded the Diapason d´Or 2015. Her CD Kennst du das Land (Harmonia Mundi, 2016), also with pianist Eugene Asti and released in April 2016 by Harmonia Mundi, contains songs of Hugo Wolf and has been highly acclaimed by international critics. In May 2018 Bach’s Dialogue Cantatas with Michael Volle and AKAMUS has been released by Harmonia Mundi, followed by Harmonie du soir with Mélodies Françaises by Debussy. Her latest album Le Bal des Animuaux, also with Eugene Asti, has been released by Harmonia Mundi in November 2018.
Born in Belgium, Sophie Karthäuser completed her studies with Noelle Barker at the Guildhall School of Music and Drama.